Tony Chinnery is a builder of historical keyboard instruments, particularly of harpsichords and early fortepianos. He keeps a workshop not far from Florence in Italy. The instruments from their workshop, which generally are replicas of particular historical instruments, are widely used by performers and have appeared in many recordings. They have been played in concert by such performers as Gustav Leonhardt, Kenneth Gilbert, and Ton Koopman.

A number of the instruments can be seen in museums:

Bartolomeo Cristofori di Francesco was an Italian maker of musical instruments famous for inventing the piano.

A spinet is a smaller type of harpsichord or other keyboard instrument, such as a piano or organ.

A fortepiano[ˌfɔrteˈpjaːno] is an early piano. In principle, the word "fortepiano" can designate any piano dating from the invention of the instrument by Bartolomeo Cristofori around 1700 up to the early 19th century. Most typically, however, it is used to refer to the late-18th to early-19th century instruments for which Haydn, Mozart, and the younger Beethoven wrote their piano music. Starting in Beethoven's time, the fortepiano began a period of steady evolution, culminating in the late 19th century with the modern grand. The earlier fortepiano became obsolete and was absent from the musical scene for many decades. In the 20th century the fortepiano was revived, following the rise of interest in historically informed performance. Fortepianos are built for this purpose today in specialist workshops. 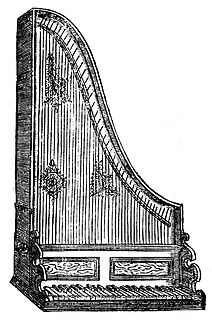 A clavicytherium is a harpsichord in which the soundboard and strings are mounted vertically facing the player. The primary purpose of making a harpsichord vertical is the same as in the later upright piano, namely to save floor space. In a clavicytherium, the jacks move horizontally without the assistance of gravity, so that clavicytherium actions are more complex than those of other harpsichords.

Gottfried Silbermann was a German builder of keyboard instruments. He built harpsichords, clavichords, organs, and fortepianos; his modern reputation rests mainly on the latter two. 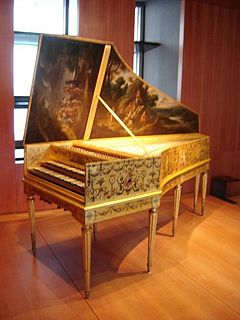 Pascal-Joseph Taskin was a Belgium-born French harpsichord and piano maker.

The oval spinet is a type of harpsichord invented in the late 17th century by Bartolomeo Cristofori, the Italian instrument maker who later achieved fame for inventing the piano. The oval spinet was unusual for its shape, the arrangement of its strings, and for its mechanism for changing registration. 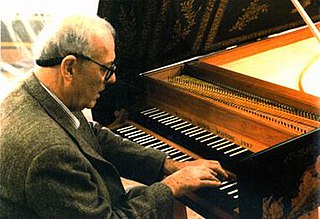 William Richmond Dowd was an American harpsichord maker and one of the most important pioneers of the historical harpsichord movement.

The harpsichord was an important keyboard instrument in Europe from the 15th through the 18th centuries, and as revived in the 20th, is widely played today. This article gives a history of the harpsichord; for information on the construction of this instrument, its variant forms, and the music composed for it, see harpsichord.

Americus Backers, sometimes described as the father of the English grand pianoforte style, brought the hammer striking action for keyboard instruments from his master Gottfried Silbermann's workshop in Freiburg to England in the mid-18th century. Unlike the eleven other ex-apprentices of Silbermann who followed him to England and built square pianos with his action, Backers developed Silbermann's action into a reliable, powerful and responsive form that he built into a grand harpsichord case and added two tonal effects – una corda and damper lift – activated by pedals built into the dedicated trestle stand, again his original innovation. This new instrument altered the landscape of English music, causing composers and musicians to consign the plucked string harpsichord and its music to history. It is upon Americus's design that the modern grand pianoforte we know today is based. 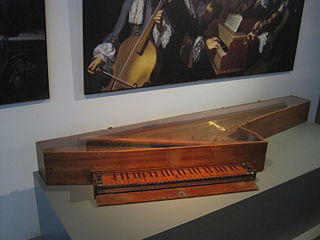 The spinettone was a kind of harpsichord invented in the late 17th century by Bartolomeo Cristofori, who was later the inventor of the piano. Other names for this instrument were spinettone da teatro, spinetta traversa.

The folding harpsichord was a kind of harpsichord meant for travel. Since it could be folded up into a fairly compact space, it was more easily transported than a conventional harpsichord. The folding took place on hinges and was in the longitudinal dimension, preserving the tension on the strings. The folded instrument formed a package about the size of a large suitcase.

Leopoldo Franciolini (1844–1920) was an Italian antique dealer who flourished in the late 19th and early 20th centuries. He is remembered as a fraudster who sold faked and altered historical musical instruments. To this day his work is a barrier to the scholarly study of instruments of the past.

Girolamo Zenti was an Italian harpsichord maker and organ builder in the 17th century. He is known as the probable inventor of the bentside spinet and for having traveled unusually extensively to practice his trade at the courts of Europe, including Rome, Florence, Paris, London and Stockholm.

The Antunes family were Portuguese harpsichord- and early piano builders in the 18th and 19th centuries.