Tony Cummings is the founding editor of the magazine Cross Rhythms .

His journalistic career started in 1963 when he started a black music fanzine originally called Soul, then Soul Music Monthly and finally Shout. By 1971 he was writing occasionally for Record Mirror and then in 1973 joined Black Music magazine as Staff Writer, eventually becoming Editor. Over the next few years he interviewed such artists as Stevie Wonder, Earth Wind & Fire, Michael Jackson and hundreds more. He stopped writing for the magazine in 1976 and converted to Christianity in 1980. Within a year he was married and began to write for the Christian magazine Buzz who soon offered him the position of assistant editorship, where he interviewed people such as Rev Ian Paisley and Cliff Richard. [1]

During his years with Cross Rhythms, Cummings has interviewed multiple artists. He also mentored both Daniel Bedingfield and Natasha Bedingfield during their formative musical careers. He has produced albums for Word Records as well as a number of charity records.[ citation needed ] Among these, was the Agents of Grace compilation, in aid of the suffering in Sudan. [2] He has given seminars at various Christian festivals such as Spring Harvest and Greenbelt festival.

After Buzz magazine quit in 1986, Cummings began working with Cross Rhythms magazine in 1990. In 1991, publication of the magazine was taken over by Cornerstone House, owned by Chris Cole who was also CEO of the radio ministry that later also became named Cross Rhythms. By 1995 the publication had a readership of about 15,000. [3] In December 1993, the magazine began giving away a regular free cassette on the cover, featuring tracks from the latest Christian artists. The format changed to a free CD, in February 1999. [4] Around 2000 an online version of the magazine started and by 2005 it became online only, after the paper version started to run up debts. The website, of which the music news, articles and interviews play a huge part, is currently the UK's most visited Christian website. [5] 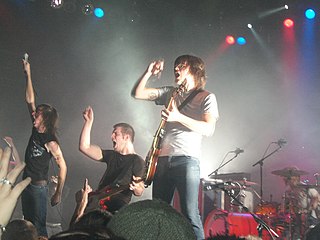 Underoath is an American rock band from Tampa, Florida. Founded by Dallas Taylor and Luke Morton on November 30, 1997, in Ocala, Florida; subsequently its additional members were from Tampa.

Rachael Maureen Lampa is an American contemporary Christian singer, songwriter and record producer. At age 15, she rose to fame and critical acclaim in 2000 with the release of her debut album, Live for You.

Phatfish (1994–2014) were a Christian rock, CCM and worship band. They lived in Brighton, England and spent twenty years writing and performing their own brand of worship-oriented rock, as well as leading worship both in the UK and across the world. They released a number of their own albums and played alongside many well-known worship leaders. They also appeared on many worship albums and on national television programmes such as BBC1's Songs of Praise. Their home church was Church of Christ The King, home of Stuart Townend and other prominent Christian figures.

"I Wanna Have Your Babies" is a song by British recording artist Natasha Bedingfield. It was written by Steve Kipner, Andrew Frampton, Wayne Wilkins and Bedingfield for her second album, N.B. (2007). The song's musical-style and production was inspired by hip hop music, and its lyrics discuss a woman's battle to stop herself from rushing into relationships in an effort to find the right man to be the father of her children.

Steve Scott is a poet, spoken word artist, and musician. His written work was published by PRIZM Magazine, Radix Magazine, Monolith:UK publications and STRIDE UK publications. His music was released on labels such as Exit Records and Blonde Vinyl.

thebandwithnoname were a Christian band who were launched by Innervation Trust in March 2002, as their flagship band, alongside girl band TBC. TBWNN hosted their final gig at the Stockport Plaza on Saturday 4 September 2010 and have since disbanded.

Louise "Lou" Fellingham, , is a Christian worship leader, singer and songwriter from Brighton in East Sussex, England. She is a founding member of the British band Phatfish and has also pursued a solo career. In 2008, she won a Christian Broadcasting Council (CBC) Award for her album Promised Land, in the category of Best Worship. She has worked alongside other Christian artists such as Matt Redman, Graham Kendrick, Tim Hughes and Stuart Townend. She regularly leads worship and performs at different venues around the world. A rendition of Fellingham leading the hymn "In Christ Alone" has had more than six million views on YouTube.

Parachute Band was a Christian worship band from Auckland, New Zealand, formed out of the New Zealand-based Christian organisation Parachute Music. The band made pop/rock music and spanned over two generations of musicians.

Split Level were a Christian rock band from Northern Ireland, active from 1986 to 2000.

David Nathan is a British-born biographer, journalist, authority on soul music, and singer. In the 1960s and 1970s, he was the co-founder of the Soul City record label and a contributing editor to Blues & Soul magazine. Living in the US between 1975 and 2009, he wrote several biographies of musicians as well as hundreds of articles and liner notes, and founded the website soulmusic.com. He has also recorded and performed as a jazz and blues singer, both under his own name and as his alter egoNefer Davis.

Newworldson is a Canadian Christian pop/soul band. Their musical style is very eclectic, but is principally soul music. The band is signed to Inpop Records and has toured extensively with the Newsboys. The band has toured in North America, Europe, and Australia and New Zealand. 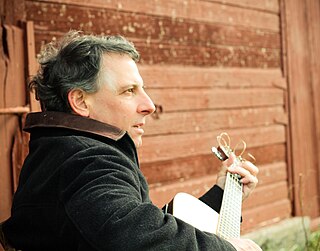 Phillip Sandifer is an American writer, musician, recording artist and music producer. His music is primarily known within the Americana and Contemporary Christian music field.

Blues & Soul is a British music magazine. The magazine covers genres such as soul, R&B, dance, jazz, hip hop, reggae and world music. The magazine was established in 1967 by its founder John Abbey. The Independent has noted Blues & Soul as being the equal of magazines such as NME and Q. Billboard magazine has also gone on to call Blues & Soul "a respected publication". 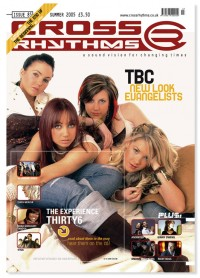 Cross Rhythms was the eponymously titled music magazine produced by the Christian media organisation of the same name. It was founded under the name Cross Rhythms Magazine by editor Tony Cummings and printer Mark Golding in April 1989, with the first issue being made available in May 1990. Two years later, publication of the magazine was taken over by Cornerstone House, a publishing company owned by Chris Cole. After partnering with Christian radio station United Christian Broadcasters (UCB) in 1995, the magazine was given more financial stability. Around this time, Cross Rhythms had a circulation of approximately 15,000. Around 2000 Cross Rhythms's official website was launched, which continued online after the paper magazine ceased publication in the summer of 2005 with its 85th issue. As of August 2009, the website is the sixth most viewed Christian website in the UK.

Hostyle Gospel is an American Christian hip hop group from Champaign, Illinois. Its members include Demetrius Morton, Raynard Glass (Proverb), and Fontaine Pizza. Hostyle Gospel is best known for their aggressive Christian rap style. The group is also known for creating their own sound called Christian battle music, which also can be referred to as Christian war music or The Hostyle Gospel sound.

Let Me At Em is the first album from the Christian hip hop group Hostyle Gospel. Hostyle Gospel Ministries released this project on May 30, 2007.

Kristene DiMarco, is an American Christian musician. Her first album, Those Who Dream, was released by Jesus Culture Music in 2008, along with a re-release of the same album in 2010 by Kingsway Music. She released, Safe Place, in 2012 with Kingsway Music. Her next album Mighty was released July 31, 2015 by Jesus Culture Music alongside Sparrow Records.