Tony DiLeo (born August 8, 1955) [1] is a former American basketball executive and former coach. He served as the 21st head coach of the Philadelphia 76ers of the NBA, taking over the position mid-season on December 13, 2008 after then-head coach Maurice Cheeks was fired after starting the season with a 9–14 record. The team went 32–27 under DiLeo's leadership (finishing the season 41-41 overall), and lost their Eastern Conference quarterfinals series to the Orlando Magic. At the end of the season, DiLeo withdrew his name from consideration to return as head coach, opting instead to return to the Sixers' front office as senior vice president and assistant general manager. [2] He was promoted to general manager in 2012, but was subsequently removed at the end of the season. [3]

DiLeo was involved international basketball as both a player and a coach. He won nine national titles in the former West Germany's top divisions, seven in the women's (with DJK Agon 08 Düsseldorf) and two in the men's competition (with BSC Saturn Köln), and earned Coach of the Year honors in 1987. He also held the role of West German federation Women's National Coach from 1981 to 1985. While in Europe, he wrote and published the European Basketball Handbook, a guide designed to acclimate American players overseas. [5] [6]

DiLeo has been a part of the 76ers basketball operations department since the 1990–91 season. After spending years within the organization in positions including director of scouting and assistant coach, DiLeo notably held the positions of Director of Player Personnel from 1999 to 2003 and was promoted to Senior vice president/assistant general manager in September 2003.

After the 76ers fired Maurice Cheeks on December 13, 2008, DiLeo was named interim head coach. Taking over the Sixers who had started the season with a 9–14 record, DiLeo managed to finish the 2008–09 season with a 41–41 record. This record was good enough to clinch the Sixers the sixth seed in the Eastern Conference for the playoffs and a matchup with the third seeded Southeast Division champion Orlando Magic. After taking game one of the series, the team lost four of five, including an ugly series-clinching loss in game six. On May 12, it was reported that DiLeo had asked team president and general manager Ed Stefanski to remove his name from consideration to return as head coach. DiLeo opted instead to return to the Sixers' front office as senior vice president and assistant general manager. [2]

DiLeo is married to Anna DiLeo, a former German Olympic and club basketball player, originally from Romania. [8] They have two sons who both play basketball: – T. J., who played college basketball at Temple University, is currently an overseas professional player, [9] while his younger brother Max plays at Monmouth University. [10] The family lives in South Jersey.

The Philadelphia 76ers are an American professional basketball team based in the Philadelphia metropolitan area. The 76ers compete in the National Basketball Association (NBA) as a member of the league's Eastern Conference Atlantic Division and play at the Wells Fargo Center. Founded in 1946 and originally known as the Syracuse Nationals, they are one of the oldest franchises in the NBA and one of only eight to survive the league's first decade.

Joseph Washington Bryant, nicknamed "Jellybean", is an American former professional basketball player and coach. He played for the Philadelphia 76ers, San Diego Clippers, and Houston Rockets of the National Basketball Association (NBA). He also played for several teams in Italy and one in France. He is the father of former Los Angeles Lakers guard Kobe Bryant. Bryant was the head coach of the WNBA's Los Angeles Sparks from August 22, 2005 until April 4, 2007 and returned to that position for the remainder of the 2011 WNBA season. Bryant has also coached in Italy, Japan, and Thailand.

Maurice Edward Cheeks is an American professional basketball coach and former player who serves as assistant coach for the Chicago Bulls of the National Basketball Association (NBA). He has also served as head coach of the Portland Trail Blazers, Philadelphia 76ers and Detroit Pistons. Cheeks was inducted into the Naismith Memorial Basketball Hall of Fame as a player in 2018. 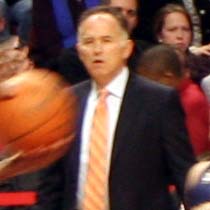 James Francis Xavier O'Brien is an American basketball coach who is currently senior advisor for the Philadelphia 76ers. O'Brien was previously an assistant and head coach at both the college and NBA levels and was head coach at Wheeling Jesuit from 1982 to 1987, Dayton from 1989 to 1994, the Boston Celtics from 2001 to 2004, Philadelphia 76ers in 2004–05, and Indiana Pacers from 2007 to 2011.

Rodney King Thorn is an American basketball executive and a former professional player and coach, Olympic Committee Chairman, with a career spanning over 50 years. In 2018, Thorn was inducted into the Naismith Memorial Basketball Hall of Fame.

Bryan Paul Colangelo is an American basketball executive who is the former general manager of the Philadelphia 76ers, Toronto Raptors and Phoenix Suns of the National Basketball Association (NBA). He also served as president of basketball operations for Philadelphia and Toronto. He is the son of Phoenix sports mogul Jerry Colangelo. He graduated from Cornell University with a bachelor of science degree in business management and applied economics. He was the 2005 and 2007 recipient of the NBA Executive of the Year Award.

David Bruce Wohl is an American former basketball player and coach, and the former general manager of the Los Angeles Clippers. A 6'2" guard who grew up in East Brunswick, New Jersey and played collegiately at the University of Pennsylvania, Wohl was selected in the 3rd round of the 1971 NBA draft by the Philadelphia 76ers. He played for six different teams over a seven-year career, including the 76ers, the Portland Trail Blazers, the Buffalo Braves, the Houston Rockets and the New York/New Jersey Nets.

Cinnaminson High School is a four-year public high school that serves students in ninth through twelfth grades from Cinnaminson Township in Burlington County, New Jersey, United States, operating as the lone secondary school of the Cinnaminson Township Public Schools. The campus covers approximately 26 acres (110,000 m2). The school has been accredited by the Middle States Association of Colleges and Schools Commission on Elementary and Secondary Schools. 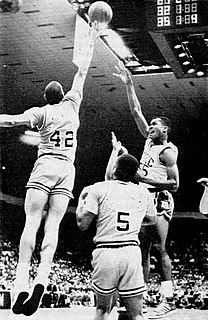 Billy Matthew King is an American basketball executive. He is the former general manager of the Brooklyn Nets and Philadelphia 76ers NBA teams, as well as former team president of the 76ers. As general manager of the Nets, King's legacy in the NBA was hurt by a series of oft-criticized trades that were deemed among the "worst in league history".

The 2008–09 Philadelphia 76ers season was the 70th season of the franchise, 60th in the National Basketball Association (NBA). The team finished with a .500 record. The only two things memorable about the season is that the team went back to the classic uniform style the team wore in the 1980s, and the Sixers defeated the Chicago Bulls in a game played at The Spectrum, the team's home from 1967–1996.

Brett William Brown is an American professional basketball coach. Brown is a former college basketball player who previously served as head coach for the Philadelphia 76ers from 2013 to 2020. Before that, Brown was an assistant on Gregg Popovich's staff on the San Antonio Spurs. He also has extensive experience coaching in Australia, having been the head coach of the North Melbourne Giants and Sydney Kings of the National Basketball League (NBL).

The Philadelphia 76ers are an American basketball team currently playing in the Atlantic Division of the Eastern Conference in the National Basketball Association (NBA). The 76ers are third in NBA history in wins and playoff appearances.

Samuel Blake Hinkie is an American sports executive who served as the general manager of the National Basketball Association's (NBA) Philadelphia 76ers from 2013 to 2016. He has also consulted for several National Football League (NFL) teams.