Tony started playing junior soccer for East Fremantle Tricolore before he played for many professional clubs in Australia including Sydney Croatia, APIA Leichhardt, Perth Glory, Sydney Olympic, Parramatta Eagles and Canberra City. He was awarded the NSL Under 21 Player of the Year in 1984. [1]

He is currently on the coaching staff for the Australian national team. 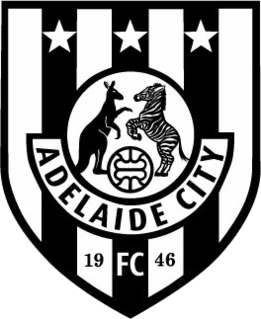 Adelaide City Football Club is a soccer club based in Adelaide, South Australia. The club was known historically as Juventus — the original name given to the club by its founders in Adelaide's Italian community.

APIA Leichhardt Football Club, also known simply as APIA, is a semi-professional soccer club based in the suburb of Leichhardt in Sydney, Australia. The club was formed in 1954 as APIA Leichhardt, by Italian Australians APIA, winner of the national Australian championship of 1987, is currently a member of the NPL NSW. 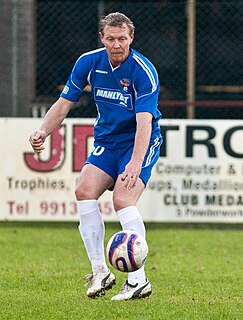 Matthew Bingley is an Australian former soccer player. A utility who can play in midfield or defence, he has played over 300 matches in nearly 20 years at the highest level of domestic football in Australia. Bingley also made 14 appearances for the Australian national team, scoring five goals.

Croatian Australians are Australian citizens of Croatian descent. Croatia has been a source of migrants to Australia, particularly in the 1960s and 1970s. In 2016, 133,268 persons resident in Australia (0.6%) identified themselves as having Croatian ancestry.

Attila Abonyi is a former Hungarian-born Australian soccer manager and player and played for the Australia national team.

Alistair Martin Edwards is a former football (soccer) player and coach. A prominent forward, he made a name for himself with National Soccer League clubs Sydney Olympic and Perth Glory. He was also a favourite with Malaysian League teams Sarawak FA, Selangor FA, Singapore FA and Johor FA Kedah FA in the 1990s.

Lance Picioane is a former Australian rules footballer who played for Adelaide, Hawthorn and the Kangaroos during his time in the Australian Football League (AFL).

The Y-League, formerly known as the National Youth League is an Australian national soccer youth developmental and under-23s reserve league, run by Football Federation Australia. The current league was established as a successor to the previous competition of the National Youth League (1984–2004) and commenced in August 2008. The league runs in conjunction with the A-League as a developmental/reserve league.

The early life of Mark and Steve Waugh, a set of twins who played Test and ODI cricket for Australia from the 1980s to the 2000s, was characterised by their steady rise through the sporting rankings in a variety of sports.

Ian (Iggy) Gray was a former Australian soccer player who played in the National Soccer League (NSL) between 1980 and 1995 for A.P.I.A. Leichhardt and Marconi. Gray represented the Australia national soccer team 14 times between 1984 and 1992. 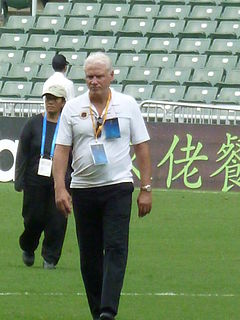 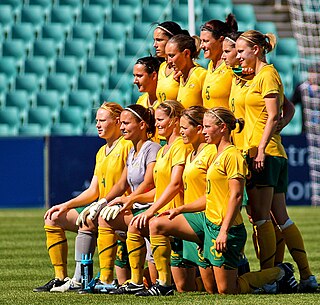 Women's soccer, also known as women's football, is a popular sport in Australia. The sport has a high level of participation in the country both recreational and professional. Football Federation Australia (FFA) is the national governing body of the sport in Australia, organising the W-League, the Australian women's national team, and the nine state governing bodies of the game, among other duties. Women's participation of modern soccer has been recorded since the early 1920s. It has since become one of Australia's most popular women's team sports.

Robert Manuel Enes is an Australian former soccer player who played at both professional and international levels as a midfielder.

Ante Tomislav Moric is an Australian former professional soccer player who played as a midfielder. Ante represented Australia at youth, Olyroo at the Atlanta Olympics and a cap at Socceroo level. After retirement Ante has become a coach, initially at the Under 20 level at Sydney United in the NSW NPL, then St George, before being appointed head coach of Victorian NPL side Dandenong City in 2019. He successfully coached Dandenong to 7th position after they were languishing in last position when he was appointed part way through the 2019 season. He is currently part of Western United FC's technical staff.