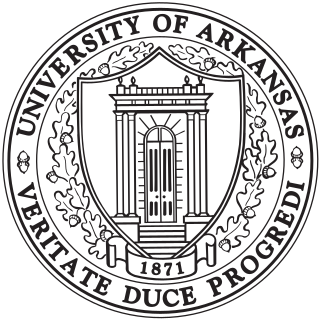 The University of Arkansas is a public land-grant research university in Fayetteville, Arkansas. It is the flagship campus of the University of Arkansas System and the largest university in Arkansas. Founded as Arkansas Industrial University in 1871, classes were first held on January 22, 1872, with its present name adopted in 1899. It is noted for its strong programs in architecture, agriculture, communication disorders, creative writing, history, law, and Middle Eastern studies, as well as for its business school, of which the supply chain management program was ranked the best in North America by Gartner in July 2020.

The Fulbright Program, including the Fulbright–Hays Program, is one of several United States Cultural Exchange Programs with the goal to improve intercultural relations, cultural diplomacy, and intercultural competence between the people of the United States and other countries through the exchange of persons, knowledge, and skills. Via the program, competitively-selected American citizens including students, scholars, teachers, professionals, scientists and artists may receive scholarships or grants to study, conduct research, teach, or exercise their talents abroad; and citizens of other countries may qualify to do the same in the United States. The program was founded by United States Senator J. William Fulbright in 1946 and is considered to be one of the most widely recognized and prestigious scholarships in the world. The program provides approximately 8,000 grants annually – roughly 1,600 to U.S. students, 1,200 to U.S. scholars, 4,000 to foreign students, 900 to foreign visiting scholars, and several hundred to teachers and professionals. 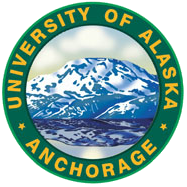 The University of Alaska Anchorage (UAA) is a public university in Anchorage, Alaska. UAA also administers four community campuses spread across Southcentral Alaska: Kenai Peninsula College, Kodiak College, Matanuska–Susitna College, and Prince William Sound College. Between the community campuses and the main Anchorage campus, roughly 15,000 undergraduate, graduate, and professional students are currently enrolled at UAA. It is Alaska's largest institution of higher learning and the largest university in the University of Alaska System. The Carnegie Foundation for the Advancement of Teaching classifies UAA among its public Master’s Colleges & Universities: Larger Programs, with a special classification for Community Engagement.

Laura Skandera Trombley is an American scholar of Mark Twain and Chair Emerita of the J. William Fulbright Foreign Scholarship Board She served as the fifth President of Pitzer College in Claremont, California, and the eighth President of the Huntington Library, Art Collections and Botanical Gardens in San Marino, California. In March 2018, she was named as the tenth president of University of Bridgeport in Bridgeport, Connecticut. On April 2, 2020, Skandera Trombley was named the 16th president of Southwestern University.

Howard Jerome Keisler is an American mathematician, currently professor emeritus at University of Wisconsin–Madison. His research has included model theory and non-standard analysis. 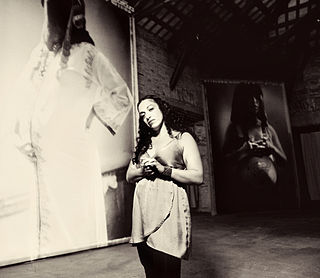 Sama Raena Alshaibi also known as Sama Alshaibi is a conceptual artist, in which she often deals with spaces of conflict as her primary subject. War, exile, power and the quest for survival are themes often seen in her works. She often uses her own body in her artwork, as a representation of the country or an issue she is dealing with.

Todd Shields is a political scientist at the University of Arkansas, where he is Dean of the J. William Fulbright College of Arts and Sciences. He completed his B.A. in psychology and political science at Miami University in 1990, and received his M.A. and Ph.D. from the University of Kentucky in 1991 and 1994. His research interests lie broadly in American campaigns and elections, though he also researches in political psychology, political communication, and research methods. The author of many journal articles, his first book examines the likely effects of campaign finance referenda on congressional elections. He is the co-author of Money Matters: The Effects of Campaign Finance Reform on Congressional Elections and the co-editor of The Clinton Riddle: Interdisciplinary Perspectives of the 42nd President. He is Professor, Chair of the Department of Political Science, Associate Director of the Fulbright Institute, and the Director of the Diane D. Blair Center of Southern Politics and Society, for which he organized the New South Consortium, 2005 Conference, chaired by Senator David Pryor.

William Drea "Bro" Adams is an American educator and advocate for the humanities. He was the tenth Chair of the National Endowment for the Humanities from 2014 to 2017. He served as the 14th President of Bucknell University from 1995 to 2000, and as the 19th President of Colby College from 2000 to 2014.

Linda Leuchter Addison is an American business executive, lawyer and author. Addison served as U.S. Managing Partner, Chair of the U.S. Management Committee, and global board member of Norton Rose Fulbright. She is Founding President of the Center for Women in Law, and co-chaired the New York State Bar Association’s Task Force on the Future of the Legal Profession. Crain's New York Business named Addison one of the "50 Most Powerful Women in New York." She is a member of the Board of Directors of Globe Life Inc. Addison also is an independent board member of KPMG LLP, the U.S. audit, tax and advisory firm. She previously served on the Advisory Board of Northern Trust Bank, N.A.

Richard W. Ziolkowski is a past president of the IEEE Antennas and Propagation Society (2005), and a former vice president of this same society (2004). In 2006 he was awarded OSA Fellow. He is also an IEEE Fellow. He was born on November 22, 1952 in Warsaw, New York.

Cindy Lee Van Dover is the Harvey Smith Professor of Biological Oceanography and chair of the Division of Marine Science and Conservation at Duke University. She is also the director of the Duke University Marine Laboratory. Her primary area of research is oceanography, but she also studies biodiversity, biogeochemistry, conservation biology, ecology, and marine science.

Helen Kim Bottomly is an immunologist and the former president of Wellesley College, serving from August 2007 to July 2016. Bottomly was the first scientist to become a president at Wellesley College. She has been a member of the American Academy of Arts and Sciences since 2009. In May 2018, she was appointed as the chair of the board of the trustees for the Fulbright University Vietnam.

Sally Gregory Kohlstedt is an American historian of science. She is a professor in the Department of Earth Sciences and in the Program in History of Science and Technology at the University of Minnesota. Kohlstedt served as the president of the History of Science Society from 1992 to 1993. Her research interests focus on the history of science in American culture and the demographics of scientific practice in institutions such as museums and educational institutions, including gender participation.

Mahmoud M. Ayoub is a Lebanese scholar and professor of religious and inter-faith studies.

Lynda F. Delph is a Distinguished Professor of Biology and Section Associate Chair of the Evolution, Ecology, and Behavior Program at Indiana University - Bloomington. 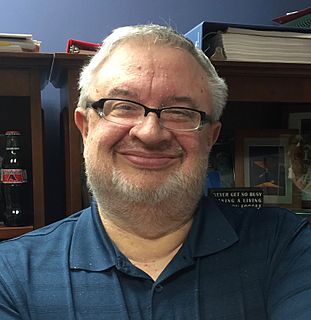 Michael Timothy Dugan is an accounting academic, currently serving as Professor of Accounting at Augusta University. He is noted for research contributions in the area of predictive ability and market-based archival research. Peers external to his home institution have recognized Dugan for teaching excellence.

William L. Megginson is an American economist, currently the Price Chair in Finance at Michael F. Price College of Business, University of Oklahoma and also the Saudi Aramco Chair Professor in Finance at King Fahd University of Petroleum and Minerals. In 2008, he was the Fulbright Tocqueville Distinguished Chair in American Studies at Paris Dauphine University.

Eugene Current-Garcia (1908-1995) was a professor at Auburn University and became Auburn's Hargis Professor Emeritus of American Literature. He was a founding editor of the Southern Humanities Review and a noted scholar of Southern literature. He was named the first Phi Kappa Phi American Scholar in 1994, the first year of that biennial award.

Joshua Daniel Rothman is an American historian. He is a professor and chair for the department of history at the University of Alabama.