Indiana University has two core campuses and seven regional campuses. Each one of the campuses is an accredited, four-year degree-granting institution.

The flagship campus of Indiana University is located in Bloomington. [3]

In addition to its core campuses, Indiana University comprises seven extensions throughout Indiana: [8]

According to the National Association of College and University Business Officers (NACUBO), the value of the endowment of the Indiana University and affiliated foundations in 2016 is over $1.986 billion. [9] The annual budget across all campuses totals over $3 Billion. [10]

The Indiana University Research and Technology Corporation (IURTC) is a not-for-profit agency that assists IU faculty and researchers in realizing the commercial potential of their discoveries. Since 1997, university clients have been responsible for more than 1,800 inventions, nearly 500 patents, and 38 start-up companies. [11]

Indiana University has several ways to recognize the accomplishments of faculty. [16]

The Mace, a symbol of authority dating back to medieval times, when it was a studded, club-like weapon that was made of iron and could break armor. It later would be used in processions of city mayors and other dignitaries and became an emblem of order and authority during academic ceremonies. The staff of IU's Mace is 30 inches long and made of polished ebony encircled with four brass, gold-plated collars and entwined by swirled gold bands. Atop the staff is a globe of plated brass with four flat sides. The sides of the globe are embossed with IU's seal, the seal of the state of Indiana, the emblematic initials "IU," and the donor inscription. The Mace was presented to the university by Indiana Alpha of Phi Delta Theta in 1949. Mounted on the globe of the Mace are 12 large synthetic jewels of blue sapphire, ruby, garnet, and topaz. Atop this rests an eagle with outstretched wings.

The Jewel and Chain of Office are worn by the university president at ceremonial occasions. The Jewel of Office is handcrafted of gold-plated sterling silver and precious jewels. Each part of the design has a symbolic meaning that reflects IU's historic origin and educational mission, noting such things as the number of states in the Union when the university was founded in 1820 (22 states), the year Indiana became a state (1816), and the years that mark IU's evolution from a seminary to a university (1820, 1828 and 1838). The jewels in the item include emeralds, sapphires, topaz, rubies, and diamonds. The Jewel of Office was presented to the university in 1946 by the Pi chapter of Beta Theta Pi. The Chain of Office was donated to the university in 1958 by the Lambda chapter of Sigma Chi. The chain is handcrafted of gold-plated sterling silver and contains 44 linked panels, eight of which are engraved with the names of the presidents who have served the university since the Jewel of Office was first worn as the symbol of the presidency. 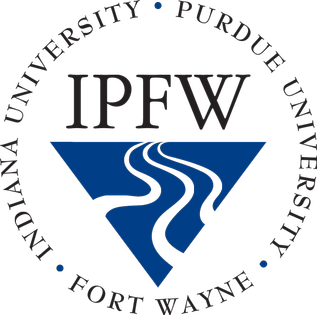 Indiana University – Purdue University Fort Wayne (IPFW) was a public university in Fort Wayne, Indiana. Founded in 1964, IPFW was a cooperatively-managed regional campus of two state university systems: Indiana University and Purdue University. IPFW hit its highest enrollment in 2014, with 13,459 undergraduate and postgraduate students in nine colleges and schools, including a branch of the Indiana University School of Medicine. During its last academic year (2017–2018), IPFW had a total enrollment of 10,414 students. IPFW offered more than 200 graduate and undergraduate degree programs through IU or Purdue universities. The university's 14 men's and women's athletic teams competed in Division I of the NCAA Summit League.

The Summit League, or The Summit, is an NCAA Division I intercollegiate athletic conference with its membership mostly located in the Midwestern United States from Indiana and Illinois on the East of the Mississippi River to the Dakotas and Nebraska on the West, with additional members in the Western state of Colorado and the Southern state of Oklahoma. Founded as the Association of Mid-Continent Universities in 1982, it was rebranded as the Mid-Continent Conference in 1989. On June 1, 2007, the conference changed its name from the Mid-Continent Conference. League headquarters are in Sioux Falls, South Dakota.

The Indiana University School of Medicine has nine campuses throughout Indiana; the principal research and medical center is located on the Indiana University – Purdue University Indianapolis campus in Indianapolis. With 1,409 M.D. Program students and 158 Ph.D. students in 2017, IU is one of the largest allopathic medical schools in the United States. The school offers several joint-degree programs, including an MD/MBA, MD/MA, MD/MPH, and a MD-PhD Medical Scientist Training Program. 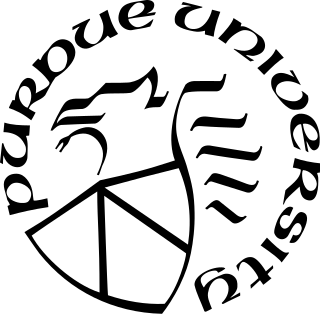 Purdue University is a public university system in the U.S. state of Indiana. A land-grant university with nearly 75,000 students across four traditional campuses, a statewide technology program, extension centers and continuing education programs, as well as another 30,000 students enrolled in an online university. Each university in the system maintains its own faculty and admissions policies which are overseen by the Purdue University Board of Trustees. Purdue's main campus in West Lafayette is the most well-known, noted for its engineering, agriculture, and business administration programs, which consistently rank among the best in the country and the world.

The Purdue Fort Wayne Mastodons, formerly known as the IPFW Mastodons and Fort Wayne Mastodons, are the athletic teams of Purdue University Fort Wayne (PFW). The Mastodons compete as a NCAA Division I school in the Summit League for most sports and in the Midwestern Intercollegiate Volleyball Association for men's volleyball. In July 2020, PFW will leave the Summit League for the Horizon League; this will not affect the school's MIVA membership. The official announcement of this move noted that PFW will be near the geographic center of its new league, with an average distance of 170 miles (270 km) from the other members. The university participates in 16 men’s and women’s sports. Before joining NCAA Division I athletics, IPFW competed in the Great Lakes Valley Conference in the NCAA Division II.

The 2017–18 Fort Wayne Mastodons men's basketball team represented Indiana University – Purdue University Fort Wayne during the 2017–18 NCAA Division I men's basketball season. The Mastodons were led by fourth-year head coach Jon Coffman and played their home games at the Gates Sports Center and the Allen County War Memorial Coliseum as members of the Summit League. They finished the season 18–15, 7–7 in Summit League play to finish in fourth place. They lost in the quarterfinals of the Summit League Tournament to North Dakota State. They were invited to the CollegeInsdier.com Tournament where they lost in the first round to Central Michigan.

The Indiana University School of Nursing is an academic college of higher education connected to Indiana University with its main research and educational facilities on the Indiana University – Purdue University Indianapolis campus and at Indiana University Bloomington. The School offers nursing programs and clinical training at all of IU's regional campuses and IU Health hospitals in Indiana, as well as online. It is known for its nursing research and education, scholarship of teaching and nursing practice, and for its collaborations with IU hospitals and clinical partners. Established in 1914 as the Indiana University Training School for Nurses, it awarded its first nursing diplomas in 1917 and was renamed the IU School of Nursing in 1956. It offers a four-year Bachelor of Science in Nursing (BSN) degree, a Master of Science in Nursing (MSN) degree, and two doctoral degrees: Doctor of Nursing Practice (DNP) and Doctor of Philosophy (Ph.D.). The IU nursing school has received multiple research grants from the National Institutes of Health.

The 2018–19 Purdue Fort Wayne Mastodons women's basketball team represents Purdue University Fort Wayne during the 2018–19 NCAA Division I women's basketball season. The Mastodons, led by third year head coach Niecee Nelson and played their home games at play their home games at the Hilliard Gates Sports Center, with one home game at the Allen County War Memorial Coliseum. They were members of The Summit League. They finished the season 7–23, 3–13 in Summit League play to finish in eighth place. They lost in the quarterfinals of the The Summit League Women's Tournament to South Dakota State.

John Konchar is an American professional basketball player for the Memphis Grizzlies of the National Basketball Association (NBA), on a two-way contract with the Memphis Hustle of the NBA G League. He played college basketball for the Purdue Fort Wayne Mastodons.