Anthony 'Tony' Charles Frias III (born 16 November 1979) is an American retired footballer who played as a midfielder or a striker.

Born in Hudson, Massachusetts, Frias played his collegiate soccer at nearby Mount Ida College in Newton, Massachusetts. He practiced with the New England Revolution in 1999 as Italian Walter Zenga was the manager, but was not signed due to oblique surgery.

In the 2000–01 season Frias appeared once for C.S. Marítimo in the Portuguese Primeira Liga, in the country of his parents. Previously, he had unsuccessful trials at S.L. Benfica and C.F. Estrela da Amadora.

Frias was eventually signed by the Revolution on 19 July 2001 [1] but, after having suffered a number of injuries, [2] he was released on waivers on 25 November 2003, never having played for the team. [3] He then returned to Portugal, representing Azores club S.C. Lusitânia during one-and-a-half third division campaigns.

Shalrie Jamal Joseph is a Grenadian former professional footballer who is currently a coach with the New England Revolution organization.

Taylor Twellman is a retired American international soccer player who played professionally from 1999 to 2009. He now works in the media as a soccer television commentator.

Kyle Singer is an American soccer player who last played goalkeeper for the New England Revolution of Major League Soccer.

Michael Finlay Parkhurst is a retired American soccer defender. The 2005 MLS Rookie of the Year and 2007 MLS Defender of the Year Award, he is capable of playing both center back and right back. Parkhurst has played for the United States men's national team, including being a member of three CONCACAF Gold Cup squads and participating in the 2008 Summer Olympics.

Wolde Selassie Harris is a Jamaican football coach and former player. He played as a striker in Major League Soccer and was the 1996 A-League MVP & Rookie of the Year. He earned twenty-eight caps with the Jamaica national team.

MLS Cup 2005 was the 10th edition of the MLS Cup, the championship match of Major League Soccer (MLS). The match took place on November 13, 2005, at Pizza Hut Park in Frisco, Texas, near Dallas, and was contested between the New England Revolution and the Los Angeles Galaxy. It was a rematch of MLS Cup 2002 and ended in a repeat victory for Los Angeles, who won 1–0 on a goal scored by Guillermo Ramírez in extra time.

MLS Cup 2002 was the seventh edition of the MLS Cup, the championship match of Major League Soccer (MLS), which took place on October 20, 2002. It was hosted at Gillette Stadium in Foxborough, Massachusetts, and contested by the New England Revolution and the Los Angeles Galaxy to decide the champion of the 2002 season. The Revolution, who were named hosts before the season, were playing in their first MLS Cup; Los Angeles had lost in all three of their previous cup appearances.

MLS Cup 2006 was the 11th edition of the MLS Cup, the championship match of Major League Soccer (MLS), and took place on November 12, 2006. It was contested between the New England Revolution and the Houston Dynamo to decide the champion of the 2006 season. The match was played at Pizza Hut Park in Frisco, Texas, which had hosted the previous cup.

MLS Cup 2007 was the 12th edition of the MLS Cup, the post-season championship match of Major League Soccer (MLS) in the United States. It was played on November 18, 2007, at Robert F. Kennedy Memorial Stadium in Washington, D.C., between the New England Revolution and Houston Dynamo in a rematch of the previous edition. The match determined the championship of the 2007 season and was attended by 39,859 spectators.

Chase Michael Hilgenbrinck McDonald is an American retired soccer player who played as a defender. He is notable for walking away from his professional career to become a Catholic priest.

Oumar Sène, is a Senegalese former professional footballer who played as a midfielder.

Thomas "Tommy" or "Whitey" Fleming was a Scottish American soccer outside forward who began his career in Scotland and finished it in the United States. During his Hall of Fame career, Fleming won five American Cups, four National Challenge Cups and at least eight league titles. 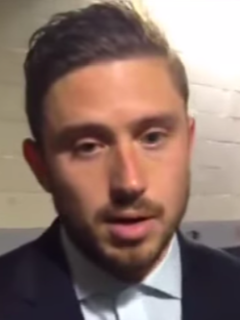 Christopher Wheeler Tierney is a former American soccer player. He spent his entire 11-year career in Major League Soccer with the New England Revolution, primarily as a defender. Tierney scored 13 goals, including one at MLS Cup 2014, and contributed 40 assists in 245 appearances. 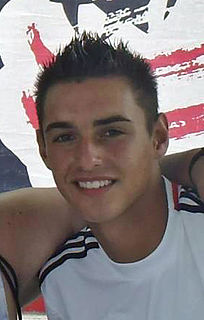 The 2004 Harvard Crimson football team represented Harvard University in the 2004 NCAA Division I-AA football season. Harvard finished the season with an overall record of 10–0, winning the Ivy league championship with a conference mark of 7–0.

Frederick Henry Kessler is an American professional soccer player who plays as a defender for Major League Soccer side New England Revolution.