Tony Gauci (6 April 1944 – 29 October 2016) was the proprietor of Mary's House, a clothes shop in Tower Road, Sliema, Malta, [1] who was a witness in the prosecution of Abdelbaset al-Megrahi in relation to the Lockerbie Bombing. [2]

According to evidence given at the Pan Am Flight 103 bombing trial in 2000, Gauci sold clothing that was found among the wreckage, and determined by investigators to have been in the same suitcase as the improvised explosive device (IED) that brought the aircraft down. [3] Gauci's account as a witness linked Libyan intelligence officer Abdelbaset al-Megrahi directly to the explosion, and was therefore important in the conviction of Megrahi on 31 January 2001. [4] Gauci died on 29 October 2016, in Swieqi, Malta at the age of 75. [5]

At the trial, Gauci appeared uncertain about the exact date he sold the clothes in question and was not entirely sure that it was Megrahi to whom they were sold. Nonetheless, Megrahi's initial appeal against conviction was rejected by the Scottish Court in the Netherlands in March 2002. In 2007, a Scottish judicial review panel raised concerns about the trial and Gauci's testimony, including that in the days prior to picking Megrahi in a lineup, he had seen a picture of him in a magazine article on his suspected role in the bombing. [6]

Five years after the trial, former Lord Advocate, Lord Fraser of Carmyllie, publicly described Gauci as being "an apple short of a picnic" and "not quite the full shilling". [7]

Since Fraser had been responsible for the investigation into the bombing of Pan Am Flight 103, and for indicting Megrahi in November 1991, he was called upon to clarify his remarks about Gauci by Colin Boyd, the Lord Advocate who was chief prosecutor at the Lockerbie trial.[ citation needed ]

After conducting a four-year review of the case, the Scottish Criminal Cases Review Commission (SCCRC) reported on 28 June 2007 that there may have been a miscarriage of justice in Megrahi's case, and granted him a second appeal against conviction. [8]

The SCCRC also revealed that Gauci had been interviewed 17 times by Scottish and Maltese police during which he gave a series of inconclusive statements. In addition, a legal source said that there was evidence that leading questions had been put to Gauci. [9]

It was clear from the SCCRC's report that the lack of reliability of Gauci's testimony as a key prosecution witness was the main reason for the referral of Megrahi's case back to the Appeal Court. In a statement on 29 June 2007, Dr Hans Köchler, the UN-appointed international observer at the Lockerbie trial, said he shared the SCCRC's doubts about Gauci's credibility, expressed in the following extract:

"there is no reasonable basis in the trial court's judgment for its conclusion that the purchase of the items (clothes that were found in the wreckage of the plane) from Mary's House (in Malta) took place on 7 December 1988." [10]

In October 2007, it was reported that Gauci received a $2 million reward for testifying against Megrahi at the Lockerbie trial. [11] [12]

In 2008, the Scottish Criminal Cases Review Commission (SCCRC Ref 23:19) found that US$2 million had been paid to Tony Gauci and US$1 million to Paul Gauci under the US Department of Justice "Rewards for Justice" programme. [13] [14]

The newspaper Malta Today ran an article on Gauci in May 2009 quoting Gauci's brother Paul as complaining that their lives had become "intolerable" amid growing interest by the press and repeating "the popular claim that Gauci was planning a move to Australia with his brother". [15] 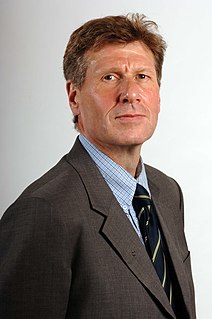 Kenneth "Kenny" Wright MacAskill is a Scottish politician who has been Member of Parliament (MP) for East Lothian since 2019. He was a Member of the Scottish Parliament (MSP) for the Lothians region from 1999 to 2007, the Edinburgh East and Musselburgh constituency from 2007 to 2011 and the Edinburgh Eastern constituency from 2011 to 2016. A member of the Scottish National Party (SNP), he was Cabinet Secretary for Justice from 2007 until 2014.

The Scottish court in the Netherlands was a special sitting of the High Court of Justiciary set up under Scots law in a former United States Air Force base, Camp Zeist in Utrecht, in the Netherlands, for the trial of two Libyans charged with 270 counts of murder in connection with the bombing of Pan Am Flight 103 over Lockerbie, Scotland, on 21 December 1988. A school on the former base was converted into a judicial court for the trial. 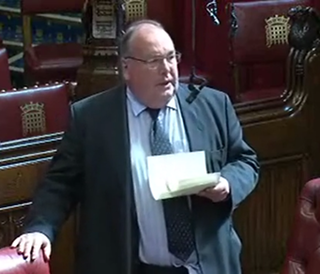 Abdelbaset Ali Mohmed al-Megrahi was a Libyan who was head of security for Libyan Arab Airlines, director of the Centre for Strategic Studies in Tripoli, Libya, and an alleged Libyan intelligence officer. On 31 January 2001, Megrahi was convicted, by a panel of three Scottish judges sitting in a special court at Camp Zeist in the Netherlands, of 270 counts of murder for the bombing of Pan Am Flight 103 over Lockerbie, Scotland, on 21 December 1988 and was sentenced to life imprisonment. His co-accused, Lamin Khalifah Fhimah, was found not guilty and was acquitted.

The Pan Am Flight 103 bombing trial began on 3 May 2000, 11 years, 4 months and 13 days after the destruction of Pan Am Flight 103 on 21 December 1988. The 36-week trial took place at a specially convened Scottish Court in the Netherlands set up under Scots law and held at a disused United States Air Force base called Camp Zeist near Utrecht. 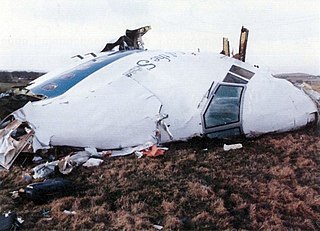 The investigation into the bombing of Pan Am Flight 103 began at 19:03 on December 21, 1988 when Pan Am Flight 103 was blown up over Lockerbie in Dumfries and Galloway, Scotland. The perpetrators had intended the plane to crash into the sea, destroying any traceable evidence, but the late departure time of the aircraft meant that its explosion over land left a veritable trail of evidence. The investigation led to the prosecution, conviction, and imprisonment of Abdelbaset al-Megrahi.

Pan Am Flight 103 conspiracy theories suggest a number of possible explanations for the bombing of Pan Am Flight 103 on December 21, 1988. Some of the theories preceded the official investigation by Scottish police and the FBI; others arose from different interpretation of evidence presented at Libyan agent Abdelbaset al-Megrahi's 2000–2001 trial; yet others have been developed independently by individuals and organisations outside the official investigation.

William Taylor, QC has been a Scottish advocate since 1971 and a QC since 1986. He has also been a barrister in England and Wales since 1990 and a Queen's Counsel there since 1998. He has specialised in criminal defence work since the 1980s. 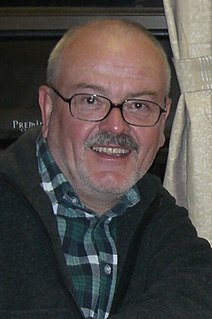 Robert Black is Professor Emeritus of Scots Law at the University of Edinburgh. He has been an Advocate in Scotland since 1972, was in practice at the Bar and became a QC in 1987.

Herbert Swire, best known as Jim Swire, is an English doctor best known for his involvement in the aftermath of the 1988 bombing of Pan Am Flight 103, in which his daughter Flora was killed. Swire lobbied toward a solution for the difficulties in bringing suspects in the original bombing to trial, and later advocated for the retrial and release of Abdelbaset al-Megrahi, the originally convicted suspect in the case. Swire also carried a fake bomb onto an aircraft as a demonstration of lax security.

David Belfall was Chairperson of Glasgow Council for the Voluntary Sector and was a Non-Executive Member of the NHS Lothian Board for a four-year term beginning in 2004.

James Mackay QPM retired as Deputy Chief Constable of Tayside Police in 2001. He has had considerable experience of criminal investigation and major inquiries. He is especially interested in forensic science and has served on national committees particularly in the field of DNA in police investigation.

Abdul Majid Giaka is an alleged double agent who defected from Jamahiriya el-Mukhabarat and became a CIA asset in August 1988.

Pan Am Flight 103 was a regularly scheduled Pan Am transatlantic flight from Frankfurt to Detroit via London and New York City. On 21 December 1988, N739PA, the aircraft operating the transatlantic leg of the route was destroyed by a bomb, killing all 243 passengers and 16 crew in what became known as the Lockerbie bombing. Large sections of the aircraft crashed onto a residential street in Lockerbie, Scotland, killing 11 people on the ground. With a total of 270 people killed, it is the deadliest terrorist attack in the history of the United Kingdom.

Hans Köchler's Lockerbie trial observer mission stemmed from the dispute between the United Kingdom, the United States, and Libya concerning arrangements for the trial of two Libyans accused of causing the explosion of Pan Am Flight 103 over Lockerbie on 21 December 1988.

Margaret Elizabeth Scott, Lady Scott is a Scottish lawyer who was appointed a judge in 2012.