Giarratano attended Tulane University, where he played college baseball for the Green Wave. In 2½ seasons at Tulane, Giarratano recorded a .319 batting average and drove in 111 runs. He was named a first-team freshman All-American at second base in 2001 and was a Conference USA All-Star infielder in 2003. He was also named to the All-Tournament Team in the 2001 Conference USA Tournament, which Tulane won. [1] In 2002, he played collegiate summer baseball with the Cotuit Kettleers of the Cape Cod Baseball League. [2]

Giarratano was drafted by the Detroit Tigers in the third round of the 2003 amateur entry draft. He signed with Detroit on June 30 of 2003. After working his way through the Tigers minor league system, Tony made his major league debut on June 1, 2005. Giarratano appeared in 15 games for the Detroit Tigers; he recorded 6 hits, 1 home run, 4 RBIs, and had a .143 batting average in his rookie year.

Giarratano was placed on the disabled list in August of 2006 and remained on the DL for all of the 2007 season for shoulder and knee injuries. Giarratano was progressing well and on target to be ready for 2008 spring training. Then, in January 2008, he re-injured his throwing shoulder and was released by the Tigers on January 31, 2008. [3] [4]

Edward Nelson Sprague Jr. is an American former Major League Baseball third baseman. He played 11 seasons in the major leagues from 1991 to 2001, with six different teams. He later served as the head baseball coach of the NCAA's Pacific Tigers for 12 seasons, from 2004 to 2015. He is now the Oakland Athletics Coordinator of Instruction.

Charles Brandon Inge is an American former professional baseball third baseman and catcher and currently a volunteer assistant coach for the Michigan Wolverines baseball team. He played 12 seasons with the Detroit Tigers, one with the Oakland Athletics and one with the Pittsburgh Pirates of Major League Baseball (MLB). He bats and throws right-handed.

Robert Leigh Higginson is a former outfielder in Major League Baseball who played his entire career for the Detroit Tigers where he wore the number 4.

Kyle A. Sleeth is a former starting pitcher in the Detroit Tigers organization. Once touted as one of Major League Baseball's top prospects, his career in the Tigers' minor league organization was marred by injuries and he progressed no higher than Double-A; nonetheless, he showed enough promise to be placed on the Tigers' 40-man roster.

Dane Kealoha A. A. Sardinha is an American former professional baseball catcher.

Michael T. Hollimon is a former Major League Baseball (MLB) second baseman and shortstop. After a collegiate baseball career at the University of Texas and Oral Roberts University, Hollimon entered professional baseball with the Detroit Tigers organization in 2005. He played professionally through 2012, including a short stint with the 2008 Tigers, during which he played 11 major-league games. 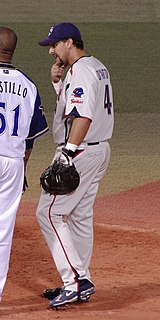 Jeffrey Scot Baisley is an American professional baseball third baseman who is currently a free agent.

Chad Daniel Huffman is an American professional baseball first baseman and outfielder who is currently a free agent. He previously played in Major League Baseball (MLB) for the New York Yankees and St. Louis Cardinals, and in Nippon Professional Baseball (NPB) for the Chiba Lotte Marines.

Brent P. Dlugach is an American former baseball shortstop who briefly played for the Detroit Tigers in 2009.

James Thomas Darnell is a professional baseball player who is retired. He was drafted in the second round of the 2008 Major League Baseball draft and played for the San Diego Padres from 2008 through 2013. James currently is a baseball strength & conditioning specialist at Fortis Fitness in Carlsbad, California. He specializes in strength, speed, agility, flexibility, and rehabilitation for aspiring baseball players and athletes. 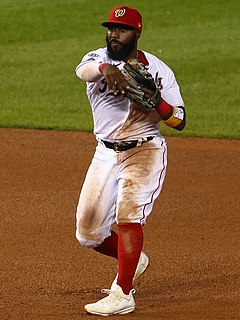 Joshua Isaiah Harrison is an American professional baseball infielder for the Washington Nationals of Major League Baseball (MLB). He previously played in MLB for the Pittsburgh Pirates and Detroit Tigers. Harrison is a two-time MLB All-Star. 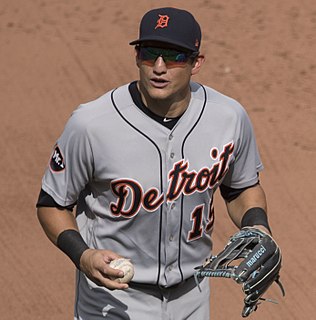