Tony Hannon (born 26 November 1977) is an Irish sportsperson who currently plays Gaelic football for Wicklow Senior Football Championship team Hollywood and was a member of the Wicklow senior team from 1996 to 2012. [1] 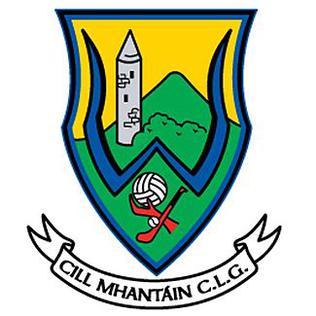 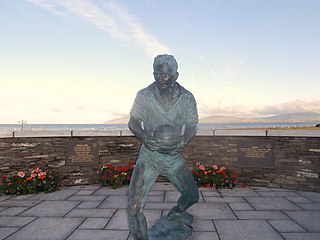 Michael O'Dwyer is an Irish retired Gaelic football manager and former player. He most famously managed the Kerry senior team between 1974 and 1989, during which time he became the county's longest-serving manager and most successful in terms of major titles won. O'Dwyer is regarded as the greatest manager in the history of the game. He is one of only three men to manage five different counties.

Denis Bastick is a Gaelic footballer who plays for Templeogue Synge Street and, formerly, for the Dublin county team.

Austin O'Malley is a Gaelic footballer who plays for St Patrick's and the Wicklow county team. O'Malley won the Dublin Senior Football Championship with UCD in 2006. The Louisburgh native was involved in a transfer process which brought him to Dublin club St Vincent's. The story was leaked to Dublin newspaper, the Metro. Austin works as a teacher in St Benildus College, where he uses the strength and ambition that he gained from years on the training pitch to discipline and motivate the pupils. In 2011 he joined Wicklow town club St Patrick's and the Wicklow county team. In 2014 he transferred back to his native club Louisburgh in Co Mayo.

John Evans is a Gaelic football manager from Killorglin, County Kerry. He is a former manager of the Roscommon senior football team. He was also manager of the Tipperary Under 21 team and was senior manager until March 2012. He led Tipperary to back to back National Football League promotions in 2008 and 2009, bringing them from Division 4 to Division 2 and winning the Division 3 title in 2009. In 2010 he led Tipperary to their first Munster Under-21 Football Championship with a 1-07 to 1-06 win over Kerry in the final. 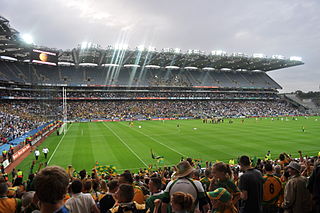 The 2011 All-Ireland Senior Football Championship was the 125th edition of the GAA's premier inter-county Gaelic football tournament, played between 31 counties of Ireland, London and New York. The draw for the 2011 championship took place on 7 October 2010. The 2011 All-Ireland Senior Football Championship Final took place at Croke Park on 18 September 2011, with Dublin winning their 23rd title.

Hugh Kenny is a former Irish Gaelic footballer from Baltinglass in County Wicklow. Kenny was part of the Baltinglass team that dominated Wicklow football in the 1980s and 1990s, winning an All-Ireland Senior Club Football Championship Title in 1990. He also managed the Wicklow from 2003 to 2006 but resigned following heavy defeat to Carlow. He also played Full Back on the Wicklow team that beat Kerry in the 2002 All-Ireland Junior Football Championship.

Glenealy Hurling Club is a Gaelic Athletic Association club located in the parish of Glenealy and Ashford in County Wicklow, Ireland. The club was founded in 1885 as a football club but switched codes to the game of hurling in the early 1920s.

Declan Hannon is an Irish hurler who plays for Limerick Senior Championship club Adare and at inter-county level as captain of the Limerick senior hurling team, whom he captained to the All Ireland hurling title in 2018 and 2020, becoming the first Limerick captain since Mick Mackey to captain Limerick to victory twice. He usually lines out as a centre-back.

The 1932 All-Ireland Senior Camogie Championship was the high point of the 1932 season in Camogie. The championship was won by Dublin, who defeated Galway by a nine-point margin in the final for a historic first success in a new championship. The match was played alongside a senior hurling challenge between Galway and Cork at Galway Sportsgrounds on July 30, 1933.

John Flynn is an Irish sportsperson who currently plays Gaelic football for Wicklow Senior Football Championship team Baltinglass and was a member of the Wicklow senior team from 2003 to 2012. While Flynn remained as a sub for most he was called up in 2010 after the current goalkeeper Mervyn Travers sustained a serious knee injury which forced him out, Flynn subsequently replaced Travers and remained in goalkeeping position. In October 2012, Flynn announced his retirement from inter-county football. Flynn returned to the panel in early 2013 after being recalled.

Alan Byrne is an Irish sportsperson who played Gaelic football for Wicklow Senior Football Championship team Annacurra and was a member of the Wicklow senior team from 2003 until 2015. Byrne predominantly played as a corner back for Wicklow but in many central positions from centre back to centre forward for his club. 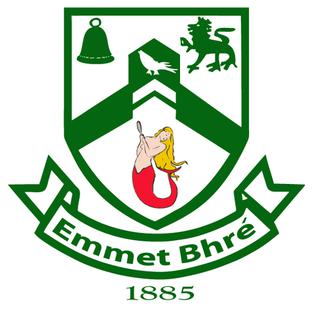