Anthony Hirst (born 21 January 1967) is a British actor, theatre director and narrator best known for playing Mike Barnes on the soap opera Hollyoaks and in Coronation Street as Paul Kershaw, the love interest of Eileen Grimshaw. Hirst also narrates the UK version of How It's Made, shown on Quest and the Discovery channels, and various programmes for Channel 4.

Hirst's acting roles include Mike Barnes from Hollyoaks , [1] Martin Gooch from The Ghost Squad and Steve Kingsley from Holby City . He has narrated TV documentaries such as Blueprint for Disaster , 2005, The Garage , Smash Lab , and How It's Made since 2001. He also narrates some of the programme trailers on Fox and Channel 4.[ citation needed ] Hirst appeared as a fireman called Paul on Coronation Street during the show's 50th anniversary in December 2010. Paul returned to Coronation Street as a regular character during October 2011.[ citation needed ] It was revealed on 24 February 2013 that Hirst would be leaving Coronation Street in 2013 at the end of his contract. [2] In 2014, Tony Hirst narrated two seasons of Food Factory and in 2015 narrated season 1 of Home Factory both on Discovery science.

Hirst appeared on Ready Steady Cook , on BBC Two on 5 March 2008, and lost to Zoë Lister, who played Zoe Carpenter in Hollyoaks. He played the part of Rom, a Roman man, on CBBC children's history programme The Romans in Britain shown on BBC2 and "Uncle Jake" in the BBC children's programme "The World Around Us". He played the part of a policeman in the first series of the Channel 4 show Shameless . He appeared on the Channel 4 show No Angels as an "ambulance chaser" in the first series.

Hirst narrates Benefits Street and the UK versions of Mike Rowe's Dirty Jobs and How It's Made on Discovery channels. Hirst portrays a man sent back from the future to warn of an impending alien invasion in an ad being aired on Discovery Science to promote their Out of this World campaign.

Hirst lives with partner Sue Colgrave and they have two children, actress Kate Colgrave Pope and a son Jack. [3] Hirst has an MSA Competition Licence and competed in the 2012 Silverstone Classic Celebrity Challenge race. [4] 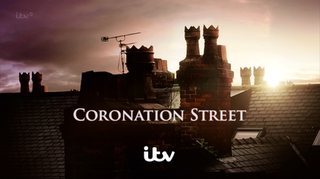 Coronation Street is a British soap opera created by Granada Television and shown on ITV since 9 December 1960. The programme typically centres around the residents of Coronation Street – a cobbled, terraced street in Weatherfield, a fictional town based on inner-city Salford.

Jeremy Edwards is an English actor, known for his roles as Kurt Benson in Hollyoaks, Danny Shaughnessy in Holby City and Mike Taylor in Millie Inbetween, as well as being a regular panellist and guest host on The Wright Stuff. In October 2019, he appeared on the ITV series The X Factor: Celebrity, with ballroom dancer Brendan Cole.

Helen Joyce Gabriel Flanagan is an English actress. She is best known for playing the role of Rosie Webster in the ITV soap opera Coronation Street from 2000–2012; she reprised the role in 2017, before going on maternity leave on 8 June 2018.

Christopher Ryan "Chris" Fountain is an English actor, music producer and DJ. He is known for his roles as Justin Burton in Hollyoaks and as Tommy Duckworth in Coronation Street.

Jayne Claire King is an English actress. She is known for her roles as Kim Tate in the ITV soap opera Emmerdale and Karen Betts in Bad Girls. She has appeared in the fourth series of Strictly Come Dancing in 2006, Safari School in 2007, and Celebrity Big Brother 14 in 2014. She also played Erica Holroyd in Coronation Street from 2014 until 2017.

Hollie-Jay Bowes is an English actress, known for her roles as Dawn O'Malley in the BBC drama Grange Hill and Michaela McQueen in the Channel 4 soap opera Hollyoaks.

Tupele Dorgu is an English actress and voice over artist. She is best known for playing the role of Kelly Crabtree in the ITV soap opera Coronation Street from 2004 to 2010.

Nicholas Pickard is an English actor. He is known for his portrayal of Tony Hutchinson in the Channel 4 soap opera Hollyoaks, a role he has held since its first episode in 1995; he remains the longest-serving cast member.

Kathy Barnes is a fictional character from the British Channel 4 soap opera Hollyoaks, played by Sarah Jane Buckley. Kathy arrived in November 2005. In October 2007, it was announced that Kathy had been written out of the serial and would leave in January 2008. She returned briefly on 24 April 2017 for the funeral of her daughter Amy Barnes and departed the following day on 25 April 2017. Kathy returned on 4 September 2017 for Ste's week-long trial. After being found not guilty on 8 September 2017, Ste was shot by Kathy who had found Shane Sweeney's gun at the beach the prior day. Following this, Kathy is taken into police custody and makes a permanent exit.

Mike Barnes is a fictional character from the British Channel 4 soap opera Hollyoaks, played by Tony Hirst. He first appeared on 9 January 2006. In 2010, soap opera magazine Inside Soap reported that the character would leave in late January with love interest Zoe Carpenter. This was later confirmed. The character briefly returned in August 2016 and again in March 2017, where his youngest daughter Amy Barnes was killed off in a "whodunit" storyline. He returned again in September 2017 giving evidence against Ste Hay during Amy's murder trial.

Sarah Barnes is a fictional character from the British Channel 4 soap opera Hollyoaks, played by Loui Batley. She debuted on-screen during the episode airing on 10 October 2005. Sarah was created by executive producer David Hanson as part of the Barnes family. In 2009, Batley quit the serial in order to pursue other projects. The character has been central to many key storylines, one of the earliest the high-profile gay storyline involving supercouple John Paul McQueen and Craig Dean.

Amy Barnes is a fictional character from the Channel 4 soap opera Hollyoaks, played by Ashley Slanina-Davies. She debuted on-screen during the episode airing on 14 November 2005. Amy was created by executive producer David Hanson and Slanina-Davies was offered the role whilst looking for work as an extra. In 2009, Slanina-Davies stated that she would be lost without the role and confirmed her loyalty to the serial. In July 2010, it was announced that Slanina-Davies would be leaving the show. However, it was later revealed that she was back filming and staying in the serial in 2011. Amy's storylines have included underage pregnancy which resulted in the birth of daughter Leah Barnes and the subject of domestic abuse in her relationship with Ste Hay, portrayed by Kieron Richardson. Whilst filming the storyline, Slanina-Davies cut her long hair off for charity and this was scripted into the storyline.

Michaela McQueen is a fictional character from the British Channel 4 soap opera, Hollyoaks, played by Hollie-Jay Bowes. Michaela was the first of the McQueen family to be seen on-screen in 2006, when she was credited as Michaela Jones. On 8 June 2010, Bowes announced that she had quit the show and would leave in six months. However, it was announced on 24 June 2010 that show bosses had axed Bowes and speedily wrote Michaela out after she spoke about upcoming storylines and her exit on social networking website Twitter. Bowes reprised her role as Michaela in 2011, initially appearing in the fourth series of Hollyoaks Later, before reappearing in the main series. In July 2012, Bowes confirmed she would be leaving Hollyoaks.

Zoe Carpenter is a fictional character from the British Channel 4 soap opera Hollyoaks, played by Zoë Lister. The character first appeared on-screen on 1 September 2006, as one of three new students at Hollyoaks Community College. It was announced in 2009 that Lister had quit her role in order to pursue other projects; she subsequently left the series in January 2010. During Zoe's time in Hollyoaks she has been portrayed as a bubbly tomboy who often makes the wrong choices in life and has had a number of failed relationships. In March 2017, it was reported that Lister would be reprising the role and it was later confirmed that she would return for Amy Barnes' funeral. Her return aired on 24 April 2017.

Lydia Hart is a fictional character from the British Channel 4 soap opera, Hollyoaks, played by Lydia Kelly. Lydia was created by series producer Bryan Kirkwood as one of many characters introduced that year. She made her debut in the soap on 4 March 2009, and remained for ten months.

The Road to Coronation Street is a 2010 British drama first broadcast on BBC Four. It is a dramatisation of the creation of Coronation Street, the UK's longest-running television soap opera, from conception to its first transmission in December 1960. Set mainly at Granada Studios, Manchester in 1960, the 75-minute-long programme follows the true story of Tony Warren, a struggling scriptwriter who creates a vision of a television programme depicting normal life in a Salford street of terraced houses. The production first aired in October 2010, and was one of several programmes celebrating the 50th anniversary of Coronation Street that year.

Oliver Jacob Mellor is a British actor and former personal trainer, perhaps best known for playing the role of Dr. Matt Carter in ITV soap opera Coronation Street from 20 August 2010, departing on 5 April 2013 after a three-year stint on the show.