Anthony C. Hobson (born March 29, 1959) is an American college women's basketball coach currently coaching at Fort Hays State University. Since Hobson took over at Fort Hays State, the programs as won a conference regular season championships and has appeared in three NCAA tournaments. [2] Prior to his current post, Hobson was the head coach for his alma mater Hastings College from 2001 to 2008, where he led the school to three National Association of Intercollegiate Athletics national championships. [3] Hobson coached at Cloud County Community College and his alma mater Barton Community College prior to coaching at Hastings. [4]

Hobson, a Hardy, Nebraska native, began his coaching career in 1983 at Cloud County Community College, [5] where he spent six seasons as the head coach leading the women's basketball program to six consecutive winning seasons. [6] Hobson took eight seasons off to coach at the high school level before he landed a job at his alma mater, Barton Community College. [7] While at Barton, Hobson turned the Lady Cougars program around landing him the Kansas Jayhawk Community College Conference West Division Coach of the Year in 1999. [8] Hobson left Barton after the conclusion of the 1999–2000 season. [9]

Hobson left Barton County Community College to become an associate head coach for his other alma mater, Hastings College, where he would then take over as head coach in 2001. [10] During his seven seasons at the helm of the Broncos program, Hobson led the program to three NAIA National Championships – two of which were his first two seasons [11] – earning him the NAIA Coach of the Year award all three seasons, and led the team to the NAIA Tournament each season. [12] Also during his tenure at Hastings, Hobson racked in two Great Plains Athletic Conference coach of the year awards in 2004 and 2006, and finished his time at Hastings with a record of 211–40 (.841). [13]

In June 2008, Fort Hays State University chose Hobson to lead its women's basketball program. [14] During his time at Fort Hays State, an NCAA Division II school, the Tigers have won one conference regular season championship, made three NCAA Division II Tournament appearances, and Hobson has earned the MIAA Coach of the Year award both in 2015 and 2016. [15] 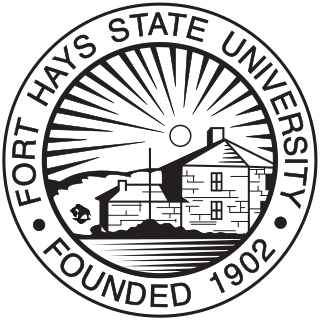 Fort Hays State University (FHSU) is a public university in Hays, Kansas. It is the fourth-largest of the six state universities governed by the Kansas Board of Regents, with a total enrollment of approximately 15,100 students. 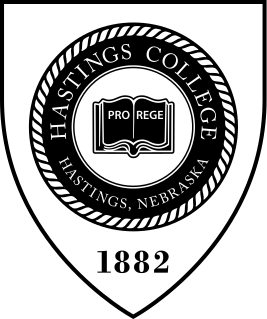 Hastings College is a private Presbyterian college in Hastings, Nebraska.

Marymount College was a four-year liberal arts college located in Salina, Kansas that opened in 1922 as a women's college.

Larry Ronald Kramer was an American football player and coach of football and baseball. He played college football at University of Nebraska–Lincoln, where he was consensus selection at tackle to the 1964 College Football All-America Team. Kramer served as the head football coach at Southern Oregon College—now known as Southern Oregon University—in Ashland, Oregon from 1970 to 1971, Austin College in Sherman, Texas from 1973 to 1982, and Emporia State University in Emporia, Kansas from 1983 to 1994, compiling career college football coaching record of 124–115–5. He led his 1981 Austin team to a share of the NAIA Division II Football National Championship. 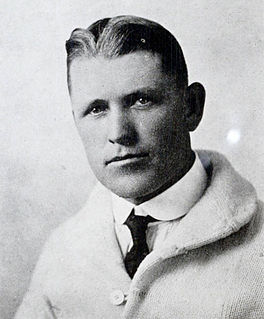 Whitcomb Glenn "Bunt" Speer was an American football and basketball coach. He served as the head football coach at Fort Hays State University in Hays, Kansas from 1915 to 1918 and Nebraska State Normal School—now known as Peru State College–from 1919 to 1922, and Midland College—now known as Midland University—in Fremont, Nebraska from 1923 to 1924, compiling a career college football coaching record of 50–21–3. Speer was also the head basketball coach at Nebraska State Normal from 1919 to 1923, tallying a mark of 71–22.

Mike Moore is a former American football coach. He served as the head football coach at Bethel College in North Newton, Kansas from 1999 to 2009, compiling a record of 47–51.

Ray Dreyer Hahn was an American football and basketball player and coach and college athletics administrator. He served as the head football coach at the South Dakota School of Mines—now known as South Dakota School of Mines and Technology—from 1929 to 1934 and Bethany College in Lindsborg, Kansas from 1938 to 1942 and again from 1946 to 1956, compiling a career college football coaching record of 70–104–4.

Robelyn Annette Garcia is a former collegiate All-American and professional All-Star basketball player. The famous athlete, currently resides in Scottsdale, Arizona. She was the Big Six Championship Game MVP on the Kansas Crusaders of the Women's Basketball Association (WBA). Garcia was inducted into The Black Archives of Mid-America WBA Hall of Fame on February 22, 2020. Robelyn, nicknamed "Robbie" by her JUCO coach, also led the nation in scoring while playing at Dodge City Community College where she was inducted into the Athletic Hall of Fame.

Robert William Fornelli is an American college baseball coach and current head baseball coach at Pittsburg State University. Previously, Fornelli coached at his alma mater Emporia State University from 2004 to 2018 where he guided the Hornets to five Mid-America Intercollegiate Athletics Association regular season championships and two conference tournament championships, 13 trips to the NCAA Tournament, two World Series appearances and a national runner-up finish. Fornelli was the coach at Fort Hays State from 1996 to 2003.

David Slifer is an American college women's basketball coach at the University of Central Missouri. During his 14 seasons at Central Missouri, Slifer has led the Jennies to one national championship, four conference regular season championships and eight NCAA tournament appearances. Prior to his current post, Slifer was the head coach for Mid-America Intercollegiate Athletics Association-rival Missouri Western from 1995 to 2004, and was the head coach at his alma mater Mount Mercy University from 1989 to 1995.

Lane R. Lord is an American college women's basketball coach currently coaching at the University of Texas Rio Grande Valley. He was previously the head coach at Pittsburg State University, a position he held from 2007 to 2018. While Lord was at Pittsburg State, the program won a conference regular season championships and appeared in four NCAA tournaments. Prior to his most recent post, Lord was the head coach for at Barton Community College from 2004 to 2007, where he led the school to three consecutive winning seasons, and one Kansas Jayhawk Community College Conference West Division co-regular season championship. Lord also taught and coached at Wichita Heights High School from 1995 to 2004.

Curtis J. Hammeke is an American university sports administrator and former college baseball player and coach. Hammeke is currently the director of athletics at Fort Hays State University. Prior to his current position, Hammeke served as an athletic director at a high school and two colleges, as well as the baseball coach for Fort Hays State prior to that. 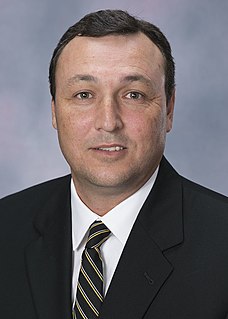 Mark A. Johnson is an American men's basketball coach, currently coaching at Fort Hays State University. Prior to his position, Johnson served as the assistant coach for the program from 1996 to 2001, as well as interim head coach leading up to the 1997–98 season. Prior to becoming an assistant coach at Fort Hays State, Johnson was an assistant at Phillips University, Labette Community College, and served as a graduate assistant for Pittsburg State University. Mark has 3 children.

Hugh Davidson was a former American football coach and scout. He served as the head football coach at the University of Montana from 1964 to 1966, compiling a record of 8–20.