He is most famous for playing in the Lebanese Basketball League for Tadamon Zouk Lebanese basketball club for many seasons. He later played for Champville SC, Al-Riyadi and again Champville SC in the same league. [2] He is regarded as one of the best imports in the Middle East after having played in Lebanon, Saudi Arabia and Iran. [1] 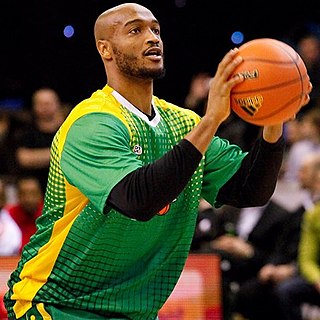 Brian Anthony Beshara (Feghali) is a former Lebanese basketball player. Beshara was also a member of the Lebanese national basketball team. At 6'8", he was Lebanon's starting forward and played an important role on both the offensive and defensive sides. His former LSU coach John Brady describes him as follows:"Brian Beshara is a good basketball player. He's tough. He's competitive. He believes in what he's doing."

The 2012-2013 season was the 17th edition of the Lebanese Basketball League. The regular season began on Friday, November 2, 2012 and ended on Monday March 4, 2013. The playoffs began on Thursday, March 7 and ended in the Semifinals on Sunday May 26, 2013, after the League got cancelled.

Nadim Souaid is a Lebanese basketball player with Hekmeh BC of the Lebanese Basketball League. He played in the 2011-12 with Bejjeh SC and he averaged 18.9 ppg, 7.1 rebounds, 3.2 assists and 1.6 steals. In 2012-13 season Nadim played for Champville SC and he averaged 9.5 ppg, 3.7 rebounds and 2 assists. In the 2013-14 season Nadim played for Tadamon Zouk and he averaged 14.2 ppg, 3.5 rebounds and 2.9 assists proving himself as a real star in the league. Nadim is also a member of the Lebanon national basketball team, with whom he competed with at the 2013 William Jones Cup. He signed with Homenetmen BC in 2015. In 2017 he decided not to renew his contract with Homenetmen BC and signed with Sagesse Club. However, in July 2018, Souaid joined Champville SC

The 2009-2010 season was the 14th edition of the Lebanese Basketball League. The regular season began on Friday, December 11, 2009 and ended on Thursday April 15, 2010. The playoffs began on Monday, April 19 and ended with the 2010 Finals on Thursday April 29, 2010, after Riyadi Beirut defeated Champville SC in 3 games to win their seventh title.