Tony Adam Mochama (born 9 May 1975) is a Kenyan poet, writer, author and a senior journalist [1] at the Standard Media Group Kenya. [2] Mochama is a three-time winner of the Burt Awards [3] for African Young Adult Literature and he is also a recipient of Miles Morland Writing Scholarship. [4] [5]

Mochama attended Catholic Primary School and graduated in 1993 from the Starehe Boys’ Centre [6] founded by the late Geoffrey Griffin who spotted his creative talent. [7] He studied Law at the University of Nairobi from 1997 until 2001 before shifting his focus to creative writing and journalism. He attended Herzen University Summer Literary Seminars to hone his creative writing between 2003 and 2006.

In the early 2003, Mochama began to work for ‘eXpression Today,’ a bi-weekly newspaper dedicated mostly to the issues of press freedom. He was also a freelance correspondent for The Nation Newspapers handling human interest features as well as theatre and book reviews. In the same year, he moved to Standard Media Group (SMG) where he became a senior writer and now runs four weekly columns. He has published up to ten books including A Jacket for Ahmet (2017) and 2063 – Last Mile Bet, Afro-futuristic (2018).

Mochama is the Secretary General of PEN (Kenya), an association of writers and subsidiary of PEN International. [8] He was a Kenyan delegate at the 82nd PEN Congress, Ourense Spain in 2016. He attended the summer program scholarship under the Summer Literary Seminars (SLS) to study creative writing at the Herzen University, Saint Petersburg, Russia in classes run by creative writers such as George Saunders. Mochama would attend three more SLS seminars between 2004 and 2006, to perfect his craft in both prose and poetry.

Mochama was a 2013 resident poet at the Ca’Foscari University, Venezia, Italy and a 2019 Emily Harvey Foundation resident writer [9] in Venice, Italy. He has also visited Canada, London, Portugal and (Germany) under different literary activities as a speaker, reader and facilitator. [10]

In 2014, Mochama was accused of sexually assaulting the Asian-Kenyan poet and feminist activist Shailja Patel. [11] Prof. Wambui Mwangi led the public uproar, which permeated Twitter for days, following the accusation. Later, the Nairobi CID overturned the case by officially concluding it, as both malicious and an afterthought. Mochama then sued Shailja Patel and Prof. Wambui Mwangi for four million Kenyan shillings in punitive damage to his reputation, under the Civil Suit number 399 of 2015. [12] It was announced on the 6th of August 2019 that a Kenyan court absolved and awarded Mochama 9 million shillings for defamation. [13] The court has also ordered both Shalja Patel and Prof Wambui Mwangi to apologise to Mochama through the court within 14 days. [13]

Meja Mwangi is a Kenyan writer. He has worked in the film industry, including in screenwriting, assistant directing, and casting. 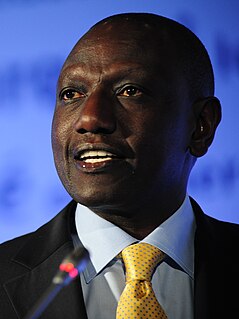 William Kipchirchir Samoei Arap Ruto is a Kenyan politician and the Deputy President of Kenya since 2013. He served as the Acting President of Kenya between 6 and 8 October 2014 when President Uhuru Kenyatta was at the International Criminal Court (ICC), in the Hague, Netherlands. He previously served in various ministerial positions, including the Ministries of Home Affairs, Agriculture, and Higher Education Science and Technology. He was the Secretary General of the Kenya Africa National Union (KANU), the former ruling political party, and the MP for Eldoret North Constituency between December 1997 and January 2013. He won the seat in the 1997 elections after defeating Reuben Chesire. He was appointed to the position of Assistant Minister in the Office of the President by President Daniel arap Moi in 1998. He was promoted to be Minister for Home Affairs in August 2002. Ruto has also previously served as the Chairman of the Parliamentary Select Committee on Constitutional Reform in the 9th Parliament.

Mũkoma wa Ngũgĩ is a Kenyan poet and author. His father is the author Ngũgĩ wa Thiong'o.

Kwani? is a leading African literary magazine based in Kenya that has been called "undoubtedly the most influential journal to have emerged from sub-Saharan Africa", although that tribute might more accurately go to Transition Magazine, which was founded in Kampala, Uganda, in 1961. The magazine grew out of a series of conversations that took place among a group of Nairobi-based writers in the early 2000s. Its founding editor, Binyavanga Wainaina, spearheaded the project shortly after winning the 2002 Caine Prize for African Writing. The first print issue of the magazine was published in 2003. Kwani? has been called "the most renowned literary journal in sub-Saharan Africa". It is produced by the Kwani Trust, which is "dedicated to nurturing and developing Kenya’s and Africa’s intellectual, creative and imagination resources through strategic literary interventions".

Shailja Patel is a Kenyan poet, playwright, theatre artist, and political activist. She is most known for her book Migritude, based on her one-woman show of the same name, which was funded by the Ford Foundation. CNN characterizes Patel as an artist "who exemplifies globalization as a people-centered phenomenon of migration and exchange." She divides her time between Nairobi, Kenya, and Johannesburg, South Africa. She is a founding member of Kenyans For Peace, Truth and Justice, a civil society coalition that works for an equitable democracy in Kenya. Her book, Migritude, was published by Kaya Press in 2010. 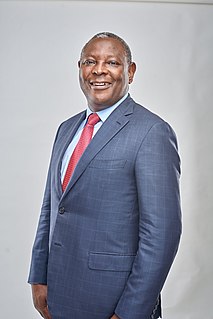 James Mwangi CBS is a Kenyan accountant, career banker, businessman, and entrepreneur. He is the current Group Managing Director and Group Chief Executive Officer of Equity Group Holdings Plc, the banking conglomerate with one of the largest customer base on the African continent, over 14 million as of December 2019.

Moraa Gitaa is a Kenyan novelist, Peace Studies and Conflict Management researcher, cultural advocate and arts curator. She is the author of the YA novels Let’s Talk About This, The Kigango Oracle, Hila and The Shark Attack among other works. Moraa was a 2017 apexart Fellow. Moraa was one of the Kenya Chapter winners of the 2014 Burt Award for African Literature and shortlisted for the 2010 Penguin Prize for African Writing and also won First Prize in the National Book Development Council of Kenya (NBDCK) Adult Fiction literary award in 2008

Boniface Mwangi is a Kenyan photojournalist, politician and activist involved in social-political activism. He is known for his images of the post-election violence that hit Kenya in 2007–2008.

Billy Kahora is a Kenyan writer and editor based in Nairobi. He was commended by the 2007 Caine Prize judges for his story Treadmill Love. His stories Urban Zoning and Gorilla’s Apprentice were shortlisted for the prize in 2012 and 2014, respectively. He has written the non-fiction novella The True Story of David Munyakei the screenplay for Soul Boy and co-wrote Nairobi Half Life. As Managing Editor of Kwani Trust, Kahora has edited seven issues of the Kwani? journal. He is a contributing editor to the Chimurenga Chronic.

Ng'endo Mwangi was Kenya's first woman physician. She set up clinics serving a very large rural population. She was born in Kenya and studied in the United States.

Yewande Omotoso is a South African-based novelist, architect and designer, who was born in Barbados and grew up in Nigeria. She is the daughter of Nigerian writer Kole Omotoso, and the sister of film maker Akin Omotoso. She currently lives in Johannesburg. Her two published novels have earned her considerable attention, including winning the South African Literary Award for First-Time Published Author, being shortlisted for the South African Sunday Times Fiction Prize, the M-Net Literary Awards 2012, and the 2013 Etisalat Prize for Literature, and being longlisted for the 2017 Bailey's Women's Prize for Fiction. 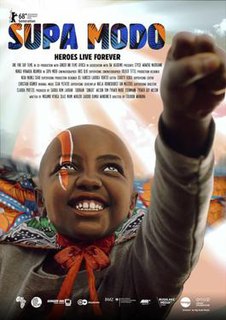 Too Early for Birds (TEFB) is a series of Kenyan theatre shows that stages diverse stories from Kenyan history. Founded in early 2017 by Kenyan performers Abu Sense and Ngartia, the show and its title were inspired by the work of historian and blogger Owaahh.

Troy Onyango is a Kenyan writer, editor and lawyer. His work has appeared in journals and magazines including Prairie Schooner, Wasafiri, Caine Prize Anthology, Brittle Paper, and Transition Magazine Issue 121, for which his short story The Transfiguration was nominated for the Pushcart Prize. His short story For What Are Butterflies Without Their Wings won the fiction prize for the inaugural Nyanza Literary Festival (NALIF) Prize.

Alice Muthoni Gichuru, who writes as Muthoni wa Gichuru, is a Kenyan writer of fiction for children and young adults, as well as short stories.

Gloria Mwaniga is a Kenyan writer, educator, and columnist for the Daily Nation and The EastAfrican newspapers. She is a recipient of a Miles Morland Foundation Writing Scholarship and a graduate of Chimamanda Adichie’s Purple Hibiscus Writing Workshop.