Tony Nsofor is a Nigerian painter.

Tony Nsofor has featured widely in group exhibitions in Nigeria and abroad. Some of them are: "6 new painters from Nsukka 1997"The British Council, Enugu, [1] "With a Human Face" Pan-African University, Lagos, 2008, "Afrika Heritage 2006: The 6th Biennale of the Pan-African Circle of Artists" [2] "Art for hope", The Grind Gallery, Los Angeles, 2008, [3]

Born in Oguta, Nigeria in May, 1973. He studied Fine and Applied Arts at the University of Nigeria, Nsukka and majored in Painting in 1997. After graduation he worked with Comet Newspapers for a year before going into full time studio practice. Since 2008 he is working part-time as an art instructor at Whitesands School, Lagos, Nigeria. [4]

The Catholic Church in Nigeria is part of the worldwide Catholic Church, under the spiritual leadership of the Pope, the curia in Rome, and the Catholic Bishops' Conference of Nigeria (CBCN). The present president of the CBCN as of 2020 is Augustine Obiora Akubeze, Archbishop of Benin city, who was preceded by the Archbishop of Jos Catholic Diocese, Ignatius Kaigama.

Joshua Uzoigwe was a Nigerian composer and ethnomusicologist. A member of the Igbo ethnic group, many of his works draw on the traditional music of that people. 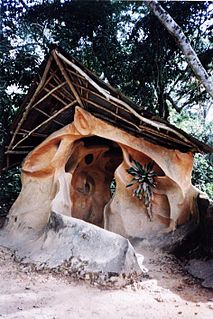 Tourism in Nigeria centers largely on events, due to the country's ample amount of ethnic groups, but also includes rain forests, savannah, waterfalls, and other natural attractions. The World Travel and Tourism Council estimated revenue related to tourism and travel in Nigeria will exceed $1 billion USD in 2007, and will account for approximately 6% of the gross domestic product. The industry suffers from the country's poor electricity, roads, and water quality.

Aron Iosifovich Zinshtein is a Russian artist, born in Ural Mountains city of Nizhniy Tagil, in 1947. Presently residing in St. Petersburg, Zinshtein has had his work exhibited around the world. He is a graduate of the Ural School of Applied Arts, 1968; the Mukhina Art Academy, Leningrad. 1977, and became a Member of the Union of Artists of the USSR in 1988 and a Member of the Academy of Contemporary Art, St. Petersburg, in 1994.

Ndidi Dike is a Nigeria-based visual artist working in sculpture and mixed-media painting. She is one of Nigeria's leading female artists.

Nandini Goud is an Indian painter and printmaker from Hyderabad, India. She received various awards and fellowships such as Junior Fellowship for painting from the Department of Culture of the Government of India for 1998 to 2000 and National Scholarship in 1995.

Kenneth Gyang is a young filmmaker in Nigeria and was born in Barkin Ladi of Plateau State, Nigeria. He studied Film Production at the National Film Institute in Jos and screenwriting at Gaston Kaboré's IMAGINE in Ouagadougou, Burkina Faso. Two of his short films as well as a script titled "Game of Life" were selected for the Berlinale Talent Campus 2006 and "Mummy Lagos" was well received as an official competition entry. "Mummy Lagos" was also selected for the Sithengi Talent Campus as part of the Cape Town World Cinema Festival in South Africa.

George Edozie is a Nigerian painter.

Marcia Kure is an American-based Nigerian artist and member of the University of Nigeria-based Nsukka School known primarily for her mixed media paintings and drawings that engage with postcolonial existentialist conditions and identities.

The United Evangelical Church is a Christian denomination in Nigeria. It has existed since 1887. It has more than 1,000 congregations and 2,000,000 members. The church was founded by an Irish missionary, Rev.Samuel Alexander Bill the first of many missionaries who served with The Qua Iboe Mission, now known as Mission Africa, which is based in Belfast. The Mission and Church were initially named after the place where the mission began its work, at Ibeno near the Qua Iboe River in the present day Akwa Ibom State of Nigeria. The church and mission have been entirely independent entities since 1984, but the two continue to work together closely.

Mohammad Ali Talpur(Urdu: محمد علی تالپر‎) is a well known contemporary Pakistani artist. He is considered as the only minimalist artist in Pakistan because of his linear drawings. He is teaching at National College of Arts and works at his studio in Lahore. His works has been exhibited in national and international art galleries like Art & Public gallery, Geneva, XVA gallery, Dubai, Finsbury Park, England, Shanghai art fair, 2007, Dubai Art Fair, 2008 and Hong Kong art fair, 2008.

SS Burutu was a British steamship, sunk after a collision with the steamship City of Calcutta off the coast of South Wales about 25 miles south-west of Bardsey Island in the Irish Sea on 3 October 1918. 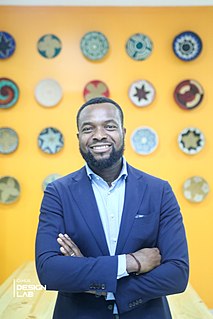 Olatunbosun Tijani is a Nigerian-British entrepreneur and co-founder and CEO of Co-Creation Hub. Co-Creation Hub; a pan-African innovation enabler that works at the forefront of accelerating the application of innovation and social capital for a better society. CcHUB which stands at the forefront of the fastest moving technology industry trends has maintained its focus of shaping the economy and the future of Africa.