Tony Okechukwu Nwoye is a Nigerian politician, a former member of the Nigerian House of Representatives representing the people of Anambra East/West constituency of Anambra state . A former Governorship candidate of the People's Democratic Party, PDP, in the 2013 election in Anambra state and was also a gubernatorial candidate of the APC in the 2017 gubernatorial election. He is currently a member of the All Progressives Congress

Nwoye was born to the family of chief and Mrs. Lawrence Nwoye of Offianta Nsugbe on 13 September 1974. He went to Metropolitan Secondary School, Onitsha for his secondary education from where he proceeded to study medicine in the University of Nigeria college of medicine and later furthered his knowledge of medicine at the Ebonyi state University and sworn in as a medical doctor.

Nwoye started his political career as medical student where he functioned in different capacity as a leader. He was noted to having fought for student unionism. later became the first medical student to become the speaker of the student union house of representative in the university of Nigeria. He received an award from the then Vice Chancellor, Prof Ginigeme Mbanefo, for the role he played in fighting cultism in the school. He became the national president of [1] in December 2003 He arose to state power as Assistant Secretary of the Executive Committee of the Anambra State PDP in 2005 and by 2006 at the age of 31, he became the Chairman of the State Executive Committee of the Anambra State PDP making him the youngest State Chairman of a major political party in the entire nation. In 2014 he unsuccessfully contested for Anambra state election under PDP

The All Progressives Grand Alliance (APGA) is a political party in Nigeria. At the legislative elections held on 12 April 2003, the party won 1.4% of popular votes and 2 of 360 seats in the House of Representatives of Nigeria but no seats in the Senate. Its candidate at the presidential elections of 19 April 2003, Chukwuemeka Odumegwu Ojukwu, won 3.3% of the vote.

Christopher Adebayo Alao-Akala is a Nigerian politician and former police officer. Akala is a former Governor of Oyo State and was a candidate of the ADP in 2019.

Peter Gregory Obi is a Nigerian politician and businessman who was the vice presidential candidate in the 2019 Nigerian general election under the Peoples Democratic Party. He was the former governor of Anambra State serving from 17 March 2006 to 2 November 2006, when he was impeached and from 9 February 2007 to 29 May 2007 after his impeachment was overturned. Although a fresh election was held on 29 April 2007, he was reappointed governor on 14 June 2007 after a court ruling that he should be allowed to complete a four-year term. He won on 6 February 2010 election for a second term as governor.

Olufemi "Femi" Pedro was the deputy governor of Lagos State, Nigeria, from 2003 until 2007. Prior to his election alongside Bola Tinubu, he was a part-owner and the chief executive officer of First Atlantic Bank, now FinBank.

James Ifeanyichukwu Nwobodo is a Nigerian businessman and politician who was governor of Anambra State (1979–1983) during the Nigerian Second Republic and was Senator for Enugu East Senatorial District in Enugu State (1999–2003). In 2003, he ran unsuccessfully in the Nigerian Presidential elections.

Ifeanyi Godwin Ararume born is a Nigerian politician. He was elected Senator for the Imo North (Okigwe) constituency of Imo State, Nigeria at the start of the Nigerian Fourth Republic, running on the People's Democratic Party (PDP) platform. He took office on 29 May 1999. He was re-elected in April 2003. After taking his seat in the Senate in June 1999, Ararume was appointed to committees on Communications, Police Affairs, Federal Character, Finance & Appropriation, Information and Niger Delta.

Mohammed Ali Ndume born is a Nigerian politician who was a member of the Federal House of Representatives from 2003 to 2011. He was elected to the Senate for Borno South, Borno State, Nigeria in April 2011 running on the People's Democratic Party (PDP) ticket. He is currently a member of All Progressive Congress (APC).

Owelle Rochas Anayo Okorocha is a Nigerian philanthropist and politician of Igbo extraction from Imo State. Okorocha is a former governor and the senator representing Imo West Senatorial district at the 9th Nigerian Senate, who won the 6 May 2011 gubernatorial election in Imo State and was re-elected for his second term on 11 April 2015. The former governor represents the Imo West Senatorial District at the red chamber.

Emmanuel Nnamdi Uba, or Andy Uba, is a Nigerian politician who was elected Senator for the Anambra South Senatorial District of Anambra State, Nigeria, in April 2011. He ran on the People's Democratic Party (PDP) platform. He defected to the ruling All Progressives Congress in February 2017; the leadership crises engulfing the former ruling party PDP may have motivated his decision. He is married to Pastor Faith Vedelago of Faith Miracle Center Abuja and they have two children together.

The All Progressives Congress is one of the two major contemporary political parties in Nigeria, along with its main rival, the People's Democratic Party. It was founded on 6 February 2013.

Solagbade Olufemi Lanlehin (also Known as SOLAN)is a Nigerian lawyer and politician. He represented the Oyo South Senatorial district in the 7th Senate of the Federal Republic of Nigeria.He contested for the seat of Governor of Oyo state in the 2019 Oyo Stae gubernatorial election under the African Democratic Congress 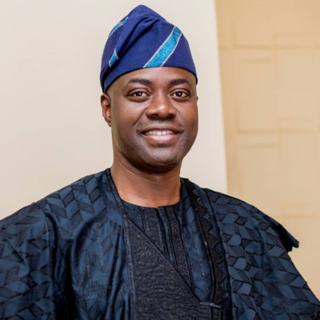 Oluseyi Abiodun Makinde is a Nigerian Businessman, Politician and Philanthropist. He is the governor of Oyo State in South-western Nigeria. He is an Engineer and a subject matter expert on fluid and Gas Metering. He is the Group Managing Director of Makon Group Limited; an indigenous oil and gas company in Nigeria. He established his first oil and gas private business called Makon Engineering and Technical Services, (METS) at the age of 29 in the year 1997, after earning years of work experience with international oil and gas companies. 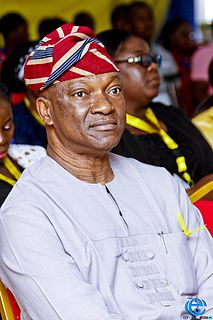 Binta Masi Garba is a Nigerian politician, businesswoman and administrator, serving as the Senator of Adamawa North Senatorial District of Adamawa State since 2015. She served as Chairperson, Adamawa State chapter of All Progressives Congress and she is the first female State Chairperson of a registered major political party in Nigeria.

Dino Melaye is a Nigerian politician, a Senator and was a member of the 8th Nigerian National Assembly, representing Kogi West Senatorial district. Dino is a member of the People’s Democratic Party. In 2015 he defected to All Progressives Congress (APC) but returned to PDP in the buildup to 2019 elections after months of political struggle with Kogi State governor. He was the Chairman Senate Committee on Federal Capital Territory (FCT) Abuja. And briefly the Senate Committee Chairman on Aviation in Nigeria. 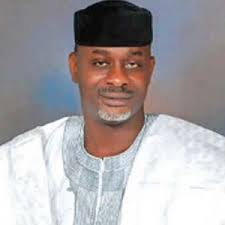 Richard Olufemi Bamisile is a Nigerian politician and current member of the Federal House of Representatives for Ekiti South II Constituency. He is also a former Speaker of the Ekiti State House of Assembly. He was among the candidates for the All Progressive Congress (APC) at the Ekiti State gubernatorial election for 2019.

Young Progressive Party commonly known as the (YPP) is a democratic socialist political party in Nigeria. The party was created to challenge the two major contemporary parties in Nigeria namely the People's Democratic Party and the All Progressives Congress. In its manifesto, it called for concerted efforts to improve welfare, fight for social justice and provide equality of opportunities for all citizens in Nigeria. The Young Progressive Party won one seat out of the 109 seats in the Nigerian Senate during the 2019 general elections.