Tony Nyadundo is a musician from Kenya. He performs the Ohangla a traditional style of music by the luo community. He is backed by the Ohangla Boys band. He is now branded the "King of Ohangla".

He was born in Kal in Tanzania. Tony's twin sister died while he was young. His family moved to Nyahera, Kisumu District, Kenya in 1978 and later to Kongoli in Nzoia. He went to Kongoli Primary School and then in 1985 moved to Bukembe Secondary School but dropped out the next year due to lack of funds. He worked as a tailor until 1992.

Tanzania officially the United Republic of Tanzania, is a country in East Africa within the African Great Lakes region. It borders Uganda to the north; Kenya to the northeast; Comoro Islands at the Indian Ocean to the east; Mozambique and Malawi to the south; Zambia to the southwest; and Rwanda, Burundi, and the Democratic Republic of the Congo to the west. Mount Kilimanjaro, Africa's highest mountain, is in north-eastern Tanzania. 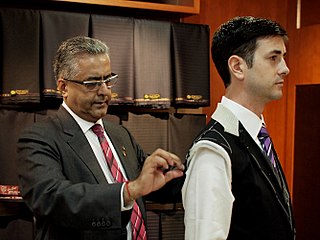 A tailor is a person who makes, repairs, or alters clothing professionally, especially suits and men's clothing.

He tried also deejaying. His brother Jack Nyadundo formed a group performing Ohangla music, and Tony eventually joined the group after 1996. Later he formed an own group and moved back to Tanzania for a while. In 1998 he moved to Migori District in Kenya and performed for local fishing communities. He also hired Onyi Papa Jey, an orutu player who has also since become a formidable musician. In 1999 he moved to Dandora in Nairobi but did not achieve much success and then moved to Kisumu, where his brother Jack had become a popular musician. [1]

The orutu is a one-stringed fiddle originated in the pre-colonial societies of western Kenya, especially amongst the Luo community. The Luo had a strong tradition of stringed instruments and was famous for their skills with harps and lyres. When played with a bow, orutu creates different notes determined by finger pressure against the central stick.

Dandora is an eastern suburb in Nairobi, Kenya. It is part of the Embakasi division. Surrounding neighbourhoods called estates include Kariobangi, Baba Dogo, Gitare Marigo and Korogocho. Dandora was established in 1977, with partial financing by the World Bank in order to offer a higher standard of housing.

His début album Ayaki was released in 2002. This marked a turning point of his career and he finally started to gain financially from being a musician. His second album was named Kidi Oba e Toke, which translates "stoned on the back". The name derives from a concert were his band was attacked by thugs who hit his drummer at back. Several other people were injured too. [1]

In 2006 he released album Obama. The name alludes to Barack Obama, the US president whose father is from the ethnic group as Nyadundo. [2]

At the 2007 Kisima Music Awards he won the traditional music category. [3] He was among 100 most influential Kenyans as selected by The Standard newspaper in August 2007. [4] [5]

The Standard is one of the largest newspapers in Kenya with a 48% market share. It is the oldest newspaper in the country and is owned by The Standard Group, which also runs the Kenya Television Network (KTN), Radio Maisha, The Nairobian, KTN News and Standard Digital which is its online platform. The Standard Group is headquartered on Mombasa Road, Nairobi, having moved from its previous premises at the I&M Bank Tower.

In October 2009, he released a new album Migingo, named after the disputed Migingo Island. [6]

Tony is recognised for his hits like, dawa ya mapenzi, Obama and many more hits. He has performed in various countries including Germany and the US. [7]

He was married but divorced in 1994. He has two children from the marriage. [1]

The Luo are several ethnically and linguistically related Nilotic ethnic groups in Africa that inhabit an area ranging from South Sudan and Ethiopia, through Northern Uganda and eastern Congo (DRC), into western Kenya, and the Mara Region of Tanzania. Their Luo languages belong to the Nilotic group and as such form part of the larger Eastern Sudanic family.

Daniel Owino Misiani was a Tanzanian-born musician based in Kenya, where he led the Shirati Jazz collective. He was known as the "King of History" in Kenya; overseas and in Tanzania, he was known as "the grandfather of benga", which he pioneered.

Hubert Mbuku Nakitare, commonly known by his stage name Nonini, is a Kenyan hip hop recording artist, entertainer, radio presenter, businessman and philanthropist. He is often referred to Godfather he is well known for his controversial lyrics.

David Mathenge, better known by his stage name Nameless, is a Kenyan pop artist. He is married to fellow musician Wahu Kagwi. They have two daughters, Tumiso and Nyakio

Tedd Josiah is a music producer from Kenya. He started as a musician, first briefly with the group Ebony Affair before forming a new group, Hart in 1993. The group was disbanded in 1995 and Josiah joined Sync Sound Studios as a producer. In 1999 he left Sync Sound Studios and formed Audio Vault Studios. It was renamed to Blu Zebra in 2002.

The Kisima Music Awards is an annual awards program that recognises musical talent in East Africa. Despite being Kenyan-based the scheme awards artists from a variety of countries, predominantly Kenya, Uganda and Tanzania, and incorporates a range of music genres.

Paul Julius Nunda, better known by his stage name Jua Cali, is a Kenyan hip hop artist. In 2000, together with record producer Clemo, he founded Calif Records where he has been ever since. Jua Cali performs in Swahili and Sheng in a popular Kenyan style of rapping called genge.

Cecilia Wairimu, better known by her stage name Amani, is a Kenyan singer and songwriter. Her contributions to the Kenyan music industry have earned her several coveted accolades, including the Best Female category at the 2009 MTV Africa Music Awards, Pearl of Africa Music Awards, Kisima Awards and Chaguo La Teeniez Awards. She released her debut album in 2006.

Kleptomaniax is a Rap group from Nairobi, Kenya. The group consists of three members: Roba, Collo and Nyashinski.

Longombas are a duo from Kenya performing a mixture of Hip hop and Soukous.

Kevin Omondi Migot better known for his stage name Dola Kabarry is a benga musician from Kenya. He leads the band Orchestra Super Haki Haki. His songs are mainly in Dholuo language.

Nyota Ndogo is a musician from Kenya who performs taarab-influenced pop music.

Mercy Myra, whose full name is Mercy Myra Grundberg, is an R&B musician from Kenya. 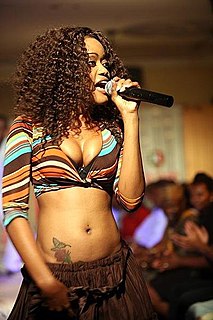 Rehema Chalamila, popularly known for her stage name Ray C, is a musician from Tanzania. Her genre of music is afro pop specifically bongo flava.

Princess Jully is a benga musician from Kenya.

Dan "chizi" Aceda, is a Kenyan musician, entrepreneur, architect, and actor from Nairobi. He has recently been recognised by a Kenyan online magazine as having one of the top 10 most iconic male voices in his home country. In 2014 he was nominated to be a part of the Global Accelerator Conference for entrepreneurs organised by the UN Foundation in New York City. He is also a 2013–2014 Global Health Corps fellow