He is known as the Lover of the 70s in Sri Lankan cinema due to the many popular films in which he acted. He was mostly restricted to innocent main role which is full of glamour and feelings. [3] According to critics, he is the last Crowned king in Sri Lankan cinema to die after Gamini Fonseka and Joe Abeywickrama. [4]

He has acted in 115 films, in 43 of which he was the leading actor and in 72 of which he played a supporting role. He also contributed as a script writer in two films. [5]

Ranasinghe Hettiarachchilage Ignatius Anthony Silva, who later became popular as Tony Ranasinghe, was born July 31, 1937 in Modara to Emmanuel Cyril and Lilian Fernando as the second of the family. [2] He had 8 siblings in the family - The eldest is the Ralex. Other younger members include Stella, Marie, Gina, Romwell, Christopher, and Daya. He studied at St. Anthony's College, Wattala, and De LaSalle College, Modera. [6] His father worked as a Technical Officer in the Department of Posts and Telecommunications. He joined Modara Dilasal College in 1948 to study English. He was a cricket fan during school times and used to collected photographs of Don Bradman.

He started his career as an English stenographer and quit from the job after few months. He changes his name to an advertisement for the 1962 drama "Bodinkarayo" with the influence from his brother Ralex. [4]

He was married to longtime partner Sirima Indrani Wickramasuriya. The wedding was celebrated on 30 April 1962. [7] Ranasinghe died on 16 June 2015 at a public hospital in Colombo at the age of 77. [8]

Ranasinghe began his career in theater with a role in Dharmasiri Wickramaratne's Ran Thodu in 1963, which won him the Governor General's Award for Best Stage Actor. This award was presented by minister T. B. Ilangaratne. His first film appearance was for Sirisena Wimalaweera's Punchi Amma but was not screened due to an economic crisis. [7]

Ranasinghe made his film debut with Lester James Peries' Gamperaliya (1964) and followed it with Ran Salu with a different villain role in the film. He worked with Peries again on Delovak Athara , in which he had the starring role. [9] He continued to play many main protagonist role in several critically acclaimed blockbuster movies such as Parasathu Mal, Baddegama, Hulawali, Duhulu Malak, Hanthane Kathawa, Pawuru Walalu and Le Kiri Kandulu. [4]

Ranasinghe was awarded the Best Supporting Actor Sarasaviya Award in 1966 for his role in Parasathu Mal. Subsequently he won Best Actor Awards for Hanthane Kathawa (1969), Duhulu Malak (1976) and Ahasin Polawata (1979). In 1980 he played the father of the protagonist in Ganga Addara . 1993's Saptha Kanya won him Best Actor Awards from Sarasaviya, Swarna Sanka, Presidential and OCIC.

Kovilage Anton Vijaya Kumaranatunga ;, popularly known as Vijaya Kumaratunga, was a Sri Lankan film actor, playback singer and a politician. One of the most popular icons in Sri Lankan cinema, He was married to former Sri Lankan President Chandrika Kumaranatunga from 1978 until his assassination in 1988. He was the Founder of Sri Lanka Mahajana Party.

Kala Keerthi Sembuge Gamini Shelton Fonseka, was a Sri Lankan film actor, film director and member of parliament. Often considered as the Greatest Actor in the Sinhala Cinema, Fonseka dominated the cinema in 1960s and 1970s to bagged Best Actor award in multiple times. Apart from acting, he was the Deputy Speaker of Sri Lanka Parliament from 1989 to 1994 and Governor of the North-Eastern Province from 1994 to 1998.

Deshamanya Kala Keerthi Dr.Premasiri Khemadasa also known as "Khemadasa Master" was a Sri Lankan music composer. Exploring the various styles of music around the world Khemadasa endeavoured to develop a unique style of music. He combined Sinhala folk tunes, Hindustani music, Western music and many other streams of music in his compositions while adapting them to fit contemporary music. 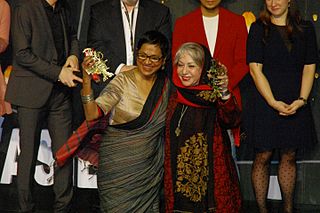 Swarna Mallawarachchi is a Sri Lankan film actress, also known as the "Golden star of Sinhalese cinema". She began her acting career whilst still a schoolgirl - starring in the 1966 released Sinhalese film Sath Samudura directed by Siri Gunasinghe. During a career that spans over 40 years, Swarna has won the 'Best Actress Award' 26 times.

Rita Irene Koys, better known as Shanthi Lekha, was a Sri Lankan Film actress. She played the role of mother in more films than any other actress in Sinhala cinema.

Kumara Thirimadura [Sinhala]) is an actor in Sri Lankan cinema, stage drama and television. He is an actor, singer, filmmaker and journalist by profession. He is considered as one of five actors who have dominated the Sri Lankan Stage by critics.

Kala Suri Kala Keerthi Dr. Keselgaspe Manatunga Jayalath Manoratne, popularly known as Jayalath Manoratne, was an award-winning actor in Sri Lankan cinema, stage drama and television. He was a lecturer by profession as well as a director and producer. A highly versatile actor from drama to comedy, Manoratne won awards at OCIC, Presidential, Sarasavi, Raigam Tele'es, Sumathi and the State Literary and Drama festivals. He was the best actor back to back in 1991 and 1992 for his performance in Socrates and Dvitva. He is considered by critics as one of the five actors who have dominated the Sri Lankan Stage.

Bajjala Walawwe Gretien Ananda Abeykoon, also as Gration Ananda or Greshan Ananda, was a Sri Lankan singer, composer, songwriter and a lyricist. Considered as the best Sinhalese film score musician to have emerged in the country since the veteran artist the Late H.R. Jothipala, Ananda sang for more than 400 films with a musical career that spanned nearly three decades.

Dharmapriya Dias is an actor in Sri Lankan cinema, stage drama and television. And a proffesional dubbing artist since 1995.Dias has titles such as playwright, actor, set designer, choreographer, teacher of art and has a master's degree in theatre and drama. He is the performing arts and sculpture art teacher in Shasthrananda Vidyalaya, Dehiwela.

Wasantha Bandara Dukgannarala [Sinhala]), popularly as Dukaa, is an actor in Sri Lankan cinema and stage drama as well as a lyricist, television host, author and media personality.

Seetha Kumari Ehelepola [Sinhala]), was an award-winning actress in Sri Lankan cinema, theater and television. One of the earliest pillars in Sri Lankan film history, Ehelepola had a career that spanned more than four decades. She was notable to act in many motherly roles in television serials as well as films.

Mahapatabadige Anthony Crisman Kivlojiyas Perera [Sinhala]), popularly as Anthony C. Perera, was an actor in Sri Lankan cinema and theater. One of the earliest pillars in Sri Lankan film history, Perera also worked as a singer, screenplay writer and director in his career that spanned more than four decades.

Kala Suri Sugathapala Senarath Yapa [Sinhala]), is a director in Sri Lankan cinema. He was also a screenwriter, producer and lyricist.