Tony Romeo is a prominent journalist in Pennsylvania, working for KYW (AM), where he is the Harrisburg bureau chief. [1]

Romeo attended Penn State Harrisburg. While a college student, he covered the Three Mile Island accident for WSBA (AM) in York, Pennsylvania. [1]

He later worked as a television reporter in Harrisburg, Pennsylvania and as news director for radio stations in White Plains, New York. [1]

In 1987, Romeo was reporting the press conference where Pennsylvania Treasurer Budd Dwyer committed suicide, causing him to develop depression and to retire from news reporting for a period. [2] Of witnessing the suicide, he later revealed that it "was the emotional equivalent of physical shock. You just go on automatic pilot--you have a job to do." [2] but that he felt the effects a week later when "I was a snowball down a hill of bad thoughts." [2] He related that "for years after when someone would hold a press conference and not be clear about what it was about, I would get a hinky feeling." [3]

In 1995, in reference to the disambiguation of his name, Romeo wrote an obituary for the namesake American songwriter Tony Romeo in the Philadelphia City Paper. [4]

When Philadelphia Mayor Ed Rendell was elected in the 2002 Pennsylvania gubernatorial election, Romeo transferred back to Harrisburg for his second stint as bureau chief. [1] He also contributes content to KDKA Radio in Pittsburgh and KYW TV in Philadelphia. [5] He is a member of the Pennsylvania Legislative Correspondents' Association (Pennsylvania Capitol Reporters). [6]

In 2005, he was named one of "Pennsylvania's Most Influential Reporters" by the Pennsylvania political news website PoliticsPA. [7]

In 2010, along with Paul Kurtz and John McDevitt, Romeo was the recipient of the Philadelphia Press Association's Radio Enterprise Award. [8] 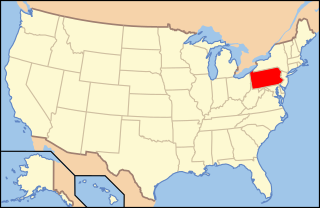 The following is an alphabetical list of articles related to the United States Commonwealth of Pennsylvania.

KYW is a commercial radio station licensed to serve Philadelphia, Pennsylvania. It is one of the oldest radio stations in America, originating in Chicago and moving to Philadelphia in 1934. KYW's unusual history includes its call sign of only three letters, beginning with a K, rare for a station in the east. It broadcasts an all-news radio format and, due to its simulcast on WPHI-FM, is branded as "KYW Newsradio." KYW serves as the flagship station of Entercom. KYW's studios are co-located within Entercom's corporate headquarters in Center City, Philadelphia, and its transmitter and two-tower directional antenna array are located in Lafayette Hill.

WPVI-TV, virtual and VHF digital channel 6, branded on-air as 6 ABC, is an ABC owned-and-operated television station licensed to Philadelphia, Pennsylvania, United States. The station is owned by the ABC Owned Television Stations subsidiary of The Walt Disney Company. WPVI-TV's studios are located on City Line Avenue in the Wynnefield Heights section of Philadelphia, and its transmitter is located in the city's Roxborough neighborhood.

Dick Standish is an American journalist. He received a Bachelor of Arts degree in History from Rutgers University–New Brunswick in 1964. He was elected to the senior honor society, Cap and Skull, and served as News Director and Station Manager at WRSU Radio Rutgers.

Tom Ferrick, Jr. (1949) is an editor, reporter and columnist long active in print and web journalism in Philadelphia. Until 2013, Ferrick served as senior editor of Metropolis, a local news and information site based in Philadelphia that he founded in 2009. Prior to that, Ferrick worked as a reporter, editor and columnist with the Philadelphia Inquirer. He had been a columnist at the Inquirer since 1998 but left the newspaper in 2008. The Philadelphia native has spent nearly 40 years as a journalist, focusing mostly on government

John M. Baer is a political columnist with The Patriot-News/PennLive, formerly with The Philadelphia Daily News/Philadelphia Inquirer.

G. Terry Madonna is a Senior Fellow in Residence at Millersville University of Pennsylvania. He was Professor of Public Affairs and Director of the Center for Politics and Public Affairs at Franklin and Marshall College. He is also the Director of the Franklin & Marshall College Poll. In the early 1970s, he served as County Commissioner of Lancaster County, Pennsylvania.

Peter L. DeCoursey was a prominent reporter of political news in Pennsylvania. He worked in or covered Pennsylvania politics for nearly three decades, serving most recently as bureau chief for the online news service Capitolwire.com.

Mario F. Cattabiani worked as a prominent journalist in Pennsylvania, working for the Philadelphia Inquirer.

Tom Barnes was an American journalist, who worked for the Pittsburgh Post-Gazette as Harrisburg Bureau Chief.

Brad Bumsted is a prominent journalist in Pennsylvania. Until 2016, he worked for the Pittsburgh Tribune-Review. He is noted for writing "reform-minded stories" about the Pennsylvania General Assembly.

Bob Durgin was a former prominent radio personality in Pennsylvania. He retired in 2013 and died December 24, 2018.

Stephen Richard Wojdak was an American politician who was a member of the Pennsylvania House of Representatives and a prominent lobbyist in Pennsylvania, where he was the President and CEO of S. R. Wojdak & Associates.

Greenlee Partners, LLC is a lobbying firm in Pennsylvania, possibly best known as the Republican-leaning firm that represented the City of Philadelphia in the 1990s. Thomas Westerman Wolf is an American politician and businessman serving as the 47th and current Governor of Pennsylvania since 2015. A member of the Democratic Party, he defeated Republican incumbent Tom Corbett in the 2014 gubernatorial election and was reelected in 2018 by a margin of 17.1%. Prior to his election to the governorship, Wolf was the Secretary of the Pennsylvania Department of Revenue from April 2007 to November 2008 and an executive in his family owned business.

The 2022 Pennsylvania gubernatorial election will take place on November 8, 2022, to elect the Governor of Pennsylvania. Incumbent Democratic Governor Tom Wolf is term-limited and cannot seek re-election to a third term.