In his first attempt to make the Olympic team "Sandoval took a crack at the '76 Olympic Marathon Trial. He'd run a 2:19 debut in Phoenix the previous December. In the trial, held in Eugene, Oregon, Sandoval ran well but it was his first near-miss: fourth-place [with the top three making the team] in 2:14:58."

In the late 1970s, Sandoval worked towards becoming a medical doctor and competed in marathons on unusually light training. Following the 1976 trials, he trained by running 35 miles per week and ran "a 2:14:37 for second place at the Nike-Oregon Track Club Marathon in Eugene in 1978. After that, he ran 2:15:23 for 15th place in the Boston Marathon in 1979."

In September 1979, Sandoval finished the Nike OTC Marathon tied for first with Jeff Wells with a time of 2:10:20, [2] with the two runners crossing the finish line hand-in-hand. [2] "'We were running together,' says Sandoval, 'At the finish, I just put my arm out and Jeff put his arm out. No words were spoken.'"[ citation needed ]

Sandoval is referenced in the 2010 novel Again to Carthage by John L. Parker Jr. [4]

Alberto Salazar is an American track coach, former world-class long-distance runner, and currently under sanctions for doping offenses involving athletes he was training. Born in Cuba, Salazar immigrated to the United States as a child with his family. They moved to Manchester, Connecticut, and then to Wayland, Massachusetts, where Salazar competed in track and field in high school. Salazar is best known for his performances in the New York City Marathon in the early 1980s and his 1982 Boston Marathon victory known as the "Duel in the Sun." He held American track records of 13:11.93 for 5,000 m on July 6, 1982 in Stockholm, Sweden and 27:25.61 for 10,000 m on June 26, 1982 in Oslo, Norway.

Dathan James Ritzenhein is a retired American long-distance runner. He held the American record in the 5,000 metres (12:56.27) from 2009-2010, when it was broken by Bernard Lagat. He is a three-time national cross country champion with wins at the USA Cross Country Championships in 2005, 2008 and 2010. Formerly a Nike athlete for the majority of his professional career, Dathan joined the Hansons-Brooks Distance Project team in 2017. In early May 2020, he announced his retirement from competition. He signed with the Swiss shoe brand On shortly thereafter in June 2020 and currently acts as the coach for the OAC in Boulder, Colorado.

Craig Steven Virgin is an American distance runner. He was born in Belleville, Illinois and grew up near Lebanon, Illinois. While in high school, Virgin won 5 state championships as well as setting the national outdoor high school 2-mile record of 8:40.9. Additionally, Virgin held the Illinois Boys Cross Country all-time state championship record for 47 years, running a 13:50.6 in 1972, a record that stood until November 9, 2019 when Josh Methner of John Hersey High School ran a 13:49.86. Virgin was Track and Field News "High School Athlete of the Year" in 1973.

Benji Durden is a Boulder, Colorado based coach of elite runners who came to prominence as a distance runner in the early 1980s, at the height of the American running boom. Durden was a member of the titular 1980 Summer Olympics United States marathon team, placing second against what to that point was perhaps the deepest field of American marathoners ever assembled. With a personal record of 2:09:58, Durden recorded 25 sub-2:20 marathons in less than a decade. He ranked among the top ten US marathoners six straight years, reaching seventh in the world in 1982.

The Eugene Marathon, is a marathon established in 2007, which takes place in Eugene, Oregon. The main event is accompanied by a half marathon, 5K and kids run. The marathon is certified by the USATF, and is a qualifying event for both the Boston Marathon and the United States Olympic Trials. The event features live music performed along the marathon and half-marathon routes, and at the finish as well. 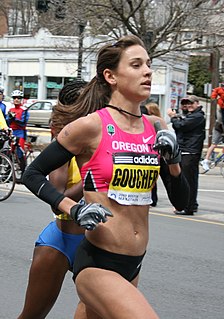 Jon Peter Anderson, is a lifelong Eugene, Oregon resident. He was a publisher and runner best known for winning the 1973 Boston Marathon. Anderson was a competitive long-distance runner from 1966 to 1984. He represented the United States as a member of the 1972 US Olympic track and field team.

Rodolfo Gómez Orozco is a retired long-distance runner, who was one of the leading runners represented from Mexico in the 1970s and 1980s. He won the Tokyo Marathon (1981), the IAAF Citizen Golden Marathon in Athens (1982), the Rotterdam Marathon (1982), the Nike OTC Marathon (1982), the Pittsburgh Marathon (1987) and the Mexico City Marathon (1987). He gained prominence on American television in 1982 when he finished in second place, four seconds back in 2:09:33 while being the primary foil to Alberto Salazar's third victory in a row at the New York Marathon. He ran a personal best of 2:09:12 at the 1983 Tokyo Marathon, finishing third in that race.

Kjell-Erik Bertil Ståhl is a retired long-distance runner from Sweden. He represented his native country twice at the Summer Olympics in the men's marathon, finishing in 19th place in Moscow. Ståhl twice won the Stockholm Marathon. He holds the Swedish marathon record with 2:10:38 set in 1983.

Gary M. Fanelli is a long-distance runner from the United States who represented American Samoa in the marathon at the 1988 Summer Olympics in Seoul, South Korea. Fanelli's 2:25:35 performance at the Olympics is an American Samoan national record. Known for running in costume, he has been called "the crown prince of road racing", "the king of costume", and "road-racing's longest-running joke".

Garry Brian Bjorklund is an American middle- and long-distance runner. He represented the United States in the 1976 Summer Olympics in the 10,000 meters. As a high schooler, he set a Minnesota state record for the mile run which lasted 39 years. At the University of Minnesota, he won the 1971 national championship in the six-mile run, and won numerous conference championships in various disciplines. Following his 1976 Summer Olympics appearance, Bjorklund became a marathon runner, and set a national age group record in 1980.

Kyle Alcorn is an American track and field athlete. As a long distance runner, Alcorn experienced most of his professional success in the steeplechase, an event in which he represented the United States at the 2012 Olympics in London, England.

Nicole Teter is an American middle distance runner, who specialized in the 800 metres. She is a three-time U.S. indoor champion, and a two-time Olympian. She also won a gold medal in the same category at the 2002 U.S. Outdoor Championships.

Luke Puskedra is an American long-distance runner who competes over distances ranging from 10,000 meters to the marathon.

The Nike OTC Marathon was a marathon held annually from 1973–1984 in Eugene, Oregon. It was organized by the Oregon Track Club (OTC) and sponsored by Nike.