"Too Close for Comfort" is a popular song by Jerry Bock, George David Weiss, and Larry Holofcener.

It was written in 1956 as part of the score for the Broadway musical Mr. Wonderful starring Sammy Davis Jr., who released the song as a single on Decca Records prior to the musical's premiere. [1] Several other pop vocalists, such as Eileen Barton, also recorded their own competing versions around this time, as well as other songs from the musical. [2] 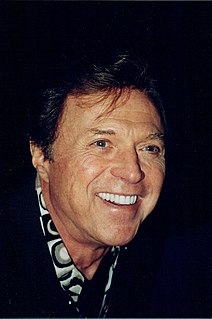 Steve Lawrence is an American singer and actor, best known as a member of a duo with his late wife Eydie Gormé, billed as "Steve and Eydie." The two first appeared together as regulars on Tonight Starring Steve Allen in 1954 and continued performing as a duo until Gormé's retirement in 2009. Gormé died August 10, 2013.

"Mr. Wonderful" is a popular song, written in 1955 written by Jerry Bock, George David Weiss, and Larry Holofcener, as the title song of a Broadway musical starring Sammy Davis Jr. The song was introduced in the musical by Olga James.

"Hey There" is a show tune from the musical play The Pajama Game, written by Richard Adler and Jerry Ross. It was published in 1954. It was introduced by John Raitt in the original production. In the show, Sid sings it to a recording device, telling himself that he's foolish to continue his advances to Babe. He plays the tape back, and after responding to his own comments, sings a duet with himself.

"All of You" is a popular song written by Cole Porter and published in 1954.

"Baubles, Bangles & Beads" is a popular song from the 1953 musical Kismet, credited to Robert Wright and George Forrest.

Peter DeRose was an American composer of jazz and pop music during the era of Tin Pan Alley.

Marilyn Cooper was an American actress known primarily for her work on the Broadway stage.

"The Things We Did Last Summer" is a popular song about nostalgia from 1946. The words were written by Sammy Cahn, with the composition by Jule Styne. The most well known version is the 1946 Top ten hit by Jo Stafford. Versions by Frank Sinatra and by Vaughn Monroe also charted that year. Shelley Fabares had a hit cover in 1962 on the pop chart. Several recordings have been made, including versions by Frank Sinatra, Vaughn Monroe, and Dean Martin who recorded different versions for his 1959 and 1966 Christmas LPs.

Steve and Eydie is the name of an American pop vocal duet, consisting of Steve Lawrence and Eydie Gormé. They originally began working together on Tonight Starring Steve Allen in 1954 and performed together until Gormé retired in 2009. Both have also had separate careers as solo singers. The performer name on their duet releases was denoted as "Steve and Eydie," without the last names. Eydie was born as Edith Gormezano, while Steve's birth name was Sidney Leibowitz. The two were married from 1957 until Gormé's death in 2013.

"I'll Be Around" is a popular song written by Alec Wilder and published in 1942. It was first recorded by Cab Calloway and his Orchestra in 1942 and the first hit version was by The Mills Brothers in 1943 when the song reached No. 17 in the Billboard pop charts. The song has become a well-known standard, recorded by many artists.

"Guess Who I Saw Today" is a popular jazz song written by Murray Grand with lyrics by Elisse Boyd. The song was originally composed for Leonard Sillman's Broadway musical revue New Faces of 1952 in which it was sung by June Carroll.

"I've Gotta Be Me" is a popular song that appeared in the Broadway musical Golden Rainbow, which starred Steve Lawrence and Eydie Gormé. The musical opened in New York City at the Shubert Theatre on February 4, 1968, and closed just under a year later, on January 11, 1969. The music and lyrics for the musical were composed and written by Walter Marks in 1967; the production featured a book by Ernest Kinoy. This song was listed in the musical as "I've Got to Be Me", and it was sung by Lawrence's character Larry Davis at the end of the first act. Lawrence released the song as a single in 1967, and the following year it hit number six on the Billboard Easy Listening chart, with little or no support from traditional Top 40 radio. 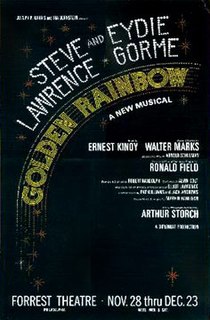 Golden Rainbow was the title of a Broadway musical that opened in 1968. It starred Steve Lawrence and Eydie Gormé for its entire run until it closed in early 1969.

This is the discography for American pop musician Steve Lawrence.