The show will aim to find Britain's next talented canine, that will star in an ad campaign for household product Cif PowerPro Naturals .

12 Yard Productions is a British television production company. It was founded in 2001 by David Young and the creative team behind the worldwide hit Weakest Link and Hat Trick Productions. 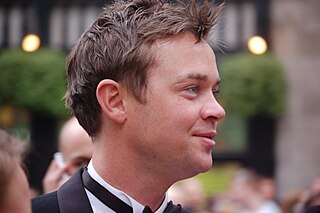 Stephen Daniel Mulhern is an English television presenter, media personality, magician, comedian, and actor. He began his television career on CITV, appearing in the children's shows Finger Tips (2001-2008) and Tricky TV (2005-2010). Mulhern has presented various television shows for ITV, including Britain's Got More Talent (2007-2019), Animals Do the Funniest Things (2007-2011), This Morning’s Hub (2011–2014), Catchphrase (2013-present), Big Star's Little Star (2013-present), and In for a Penny (2019–present). He also co-hosted the Sunday breakfast show on Heart Radio, alongside Emma Willis.

Pudsey is a town between Leeds and Bradford, in West Yorkshire, England

Britain's Got Talent is a televised British talent show competition, and part of the global Got Talent franchise created by Simon Cowell. Presented by Anthony McPartlin and Declan Donnelly, it is produced by both Thames and Syco Entertainment, distributed by Fremantle, and broadcast on ITV every year in late Spring to early Summer. The show premiered on 9 June 2007 following the success of America's Got Talent the previous year; it was initially planned for 2005, but a dispute between the broadcaster and its originally intended host led to production being suspended for two years.

Ashley is an English unisex given name, originally a place name and surname. It is derived from the Old English (Anglo-Saxon) words æsc (ash) and lēah.

The third series of Britain's Got Talent, a British talent competition series, began broadcasting in the UK during 2009, from 11 April to 30 May on ITV. Prior to production taking place, producers originally intended to expand the judging panel to include a fourth judge, but later dropped this idea; the intended newcomer, Kelly Brook, was credited as a guest judge for her involvement in a session of auditions. Apart from this, no major changes took place with the programme. 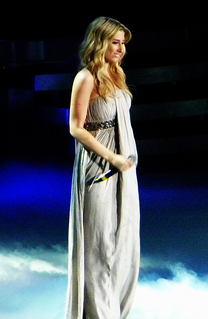 Stacey Chanelle Clare Solomon is an English singer and television personality. In 2009, she finished in third place on the sixth series of The X Factor, and gained a number one single on the UK Singles Chart when her fellow The X Factor finalists released a cover of "You Are Not Alone".

The sixth series of Britain's Got Talent, a British talent competition series, began broadcasting in the UK during 2012, from 24 March to 12 May on ITV. The sixth series saw Simon Cowell resume a full commitment to the programme following the previous series, yet neither David Hasselhoff and Michael McIntyre returned to take part in the new series, leading to them being replaced by Alesha Dixon and David Walliams. Because of her pregnancy during filming of the auditions, Amanda Holden was required to miss a number of sessions, leading to producers asking Carmen Electra to step in as a guest judge in her place.

The seventh series of Britain's Got Talent, a British talent competition series, began broadcasting in the UK during 2013, from 13 April to 8 June on ITV; because of England's international friendly with the Republic of Ireland that year, the show took a break on 29 May to avoid clashing with live coverage of the match. Because of the work schedule of Stephen Mulhern, host of Britain's Got More Talent, filmed auditions had to be pushed back to mid-January that year, though no guest judge was brought in due to the absence of Simon Cowell for an audition session. Following the previous series, the programme's format was given a minor amendment - the cash prize offered to winners was reduced to £250,000 for this series.

Ashleigh and Pudsey was a British dog trick act, comprising trainer Ashleigh Jade Butler and Pudsey, a male Border Collie, Bichon Frise, and Chinese Crested powderpuff cross. They achieved prominence as contestants in the sixth series of the television talent show Britain's Got Talent, which they won on 12 May 2012, becoming the first dog trick act to win the competition.

Jonathan Antoine and Charlotte Jaconelli, known collectively as Jonathan and Charlotte, were an English classical crossover duo from Essex. They finished as runners-up in the sixth series of Britain's Got Talent in 2012, being beaten by dancing dog act Ashleigh and Pudsey. At the time, they were aged 17 and 16 respectively. Despite not winning, the young duo were offered a £1 million record deal by Simon Cowell on his record label Syco. They released two albums, Together in 2012 and Perhaps Love in 2013. In February 2014, the duo decided to split and embark on solo careers.

The Mend were a British boy band consisting of members Kris Evans, Jay Kontzle and Craig Worsley. They originally auditioned for The X Factor in 2011 but failed to get any further than bootcamp, due to having a management deal. They went on to audition for Britain's Got Talent in 2012 and reached the semi-finals but, after the public vote was invoked, due to the judges' split decision, they failed to go through to the finals. They were then brought back by the judges for the final and finished in seventh place overall. They released their debut single "Where Were You" on 24 March 2013, independently. 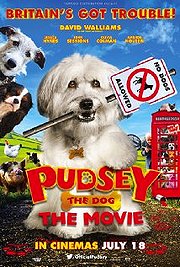 Pudsey The Dog: The Movie is a 2014 British 3D live action family comedy film directed by Nick Moore, produced by Simon Cowell, written by Paul Rose with music by Simon Woodgate and starring Pudsey the Dog, one half of the dancing duo Ashleigh and Pudsey, voiced by David Walliams.

The ninth series of Britain's Got Talent, a British talent competition series, began broadcasting in the UK during 2015, from 11 April to 31 May on ITV. The series saw the "Wildcard" format introduced in the sixth series being modified in this series to include a "Public Wildcard" – like the "Judges' Wildcard" any act eliminated in the semi-finals, primarily those that lost out in the Judges' vote, could be reinstated by the public, based on the one that received the most votes from them before the final. Although speculations and rumours began to emerge after the previous series ended, claiming that some of the judges would be leaving before the ninth series, these were later dismissed as being unfounded by ITV, on 16 January 2015.

The tenth series of Britain's Got Talent, a British talent competition series, began broadcasting in the UK during 2016, from 9 April to 28 May on ITV. To celebrate ten years of the show, the final featured a special performance entitled "Best of Britain’s Got Talent", which featured several participants who had appeared on the show during the previous nine series, including Ashleigh and Pudsey, Attraction, Diversity, Jon Clegg, Stavros Flatley, Collabro and Spelbound. It was the last series to have its live episodes broadcast at The Fountain Studios before the site's closure that year.