Top Points is a railway station on the Zig Zag Railway in the Blue Mountains area of New South Wales.

It is situated at the reversal point of the Middle and Top Roads of the Lithgow Zig Zag. There are toilet facilities at the station. [1]

When the Zig Zag Railway reopened in October 1975, Top Points was a terminal station on the line. It originally consisted of a platform on the western side with the eastern platform constructed after the line was extended to Clarence. The area behind the eastern platform was a carpark.

In 2002 the former Cooerwull station footbridge was added to join the two platforms. [2] [3]

A railway zig zag or switchback, is a method of climbing steep gradients with minimal need for tunnels and heavy earthworks. For a short distance, the direction of travel is reversed, before the original direction is resumed. Not all switchbacks come in pairs, in which case the train may need to travel backwards for a considerable distance.

The Zig Zag Railway is an Australian heritage railway, situated near the town of Lithgow in the state of New South Wales. The line climbs the western flank of the Blue Mountains, using railway zig zags to gain height. It was opened by the not for profit Zig Zag Railway Co-op. Ltd. as an unpaid volunteer staffed heritage railway in October 1975, using the alignment of the Lithgow Zig Zag line that formed part of the Main Western line between 1869 and 1910. 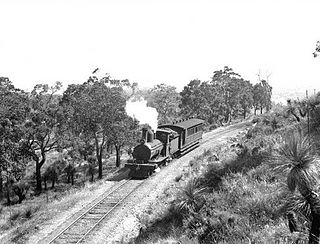 The Kalamunda Zig Zag was part of the Upper Darling Range Railway line in Western Australia opening in July 1891 and closing in July 1949. 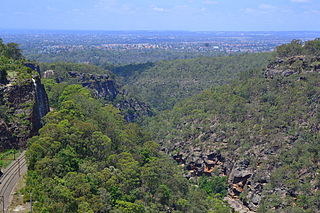 Lapstone is a suburb on the eastern escarpment of the Blue Mountains in New South Wales, Australia. Elevation 160 m (525 ft). Lapstone is located 62 kilometres west of the Sydney CBD in the local government area of the City of Blue Mountains and is part of the federal electorate of Macquarie. Lapstone consists mostly of stand-alone housing and has a few public facilities. At the 2016 census, Lapstone had a population of 961 people. Lapstone was originally bought and developed by Mr Arthur J Hand, an Alderman of the Blue Mountains City Council.

The Lapstone Zig Zag was a zig zag railway built between Emu Plains and Blaxland stations on the Main Western line of New South Wales in Australia. Constructed between 1863 and 1865 to overcome an otherwise insurmountable climb up the eastern side of the Blue Mountains, the zig zag and associated Knapsack Viaduct, a sandstone arch viaduct, were designed by John Whitton, Engineer in Chief of New South Railways, and were built by William Watkins. The zig zag was listed on the Blue Mountains local government heritage register on 27 December 1991; while the adjacent Knapsack Viaduct was listed on the New South Wales Heritage Database on 2 April 1999. The Lapstone ZigZag was the world-first ZigZag constructed on any main-line railway.

Zig Zag railway station is a railway station located on the New South Wales Main Western Line. It was originally built in April 1878 and closed in 1910 due to the opening of the Ten Tunnels Deviation which bypassed the original site of the station. The station was not rebuilt until 1959 when a new station was built alongside the 1910 alignment in a similar location to the 1878 station

The Midland Junction railway station was an important junction station on the Eastern Railway of Western Australia until its closure in 1966.

The City of Lithgow is a local government area in the Central West region of New South Wales, Australia. The area is located adjacent to the Great Western Highway and the Main Western railway line.

The Newnes Junction railway station is a closed railway station on the Blue Mountains Line, New South Wales, Australia. It served the former private branch line to Newnes. The station closed to passenger services in 1975, although it still physically exists and is occasionally used for coal trains visiting the nearby Clarence Colliery. The station consists of an island 'Up' platform, and a single side 'Down' platform.

The Lithgow Zig Zag is a heritage-listed former zig zag railway line built near Lithgow on the Great Western Line of New South Wales in Australia. The zig zag line operated between 1869 and 1910, to overcome an otherwise insurmountable climb and descent on the western side of the Blue Mountains. It was designed by John Whitton and built from 1863 to 1869 by Patrick Higgins as contractor. It is also known as the Great Zig Zag Railway and Reserves and Zig Zag Railway. The property is owned by Department of Planning and Infrastructure. It was added to the New South Wales State Heritage Register on 2 April 1999.

The Dargans Deviation was a section of the original line over the Blue Mountains in New South Wales, Australia. It was constructed from 1896 to 1897 in an effort to ease the grades of the original alignment from before Newnes Junction to Clarence, with a ruling grade of 1 in 60. Along with a few crossing loops, it enabled much longer trains to use the line. After the construction of the Ten Tunnels Deviation, it was abandoned.

The Ten Tunnels Deviation is a heritage-listed 9.2-kilometre (5.7 mi) section of the Main Western Line between Newnes Junction and Zig Zag stations in Lithgow, New South Wales, Australia. It was designed and built by the New South Wales Government Railways and built from 1 June 1908 and 16 October 1910. It is also known as Great Zig Zag Railway deviation tunnels and Bell to Zig Zag Ten Tunnel Railway Deviation. It was added to the New South Wales State Heritage Register on 2 April 1999.

Shakespeare Cliff Halt is a private halt station on the South Eastern Main Line. It is located to the western end of the dual bore Shakespeare Cliff tunnel on the South Eastern Main Line to Folkestone, England. It never appeared in any public timetable and has been used successively by railway staff, coal miners, the military and Channel Tunnel workers.

Flieden station is a station in the town of Flieden in the German state of Hesse, where the Flieden–Gemünden railway branches off the Kinzig Valley Railway. The station is classified by Deutsche Bahn (DB) as a category 5 station. 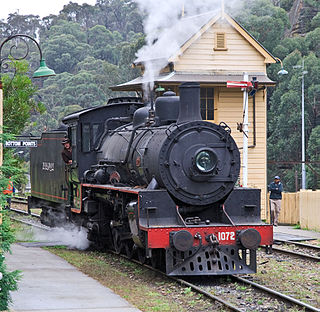 Bottom Points is a railway station on the Zig Zag Railway in the Blue Mountains area of New South Wales. 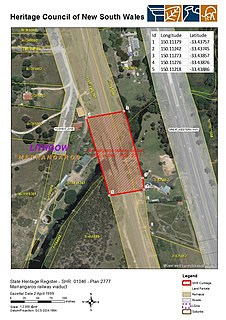 The Cooerwull railway footbridge is a heritage-listed pedestrian bridge located at Top Points Station, Zig Zag Railway, Lithgow, City of Lithgow, New South Wales, Australia. It was built in 1941. It was added to the New South Wales State Heritage Register on 2 April 1999.