The channel was used in conjunction with MHEG generated Top Up TV Active on channel 107, which is a text-based information service available 24 hours a day, informing viewers how to subscribe, costs and other information.

A similar channel, known as Top Up TV Sampler, was also broadcast by Top Up TV between December 2004 and February 2005 on channel 36, presented by Alice Beer. It advertised Top Up TV's then-current services, and was broadcast from 4:00 am to 11:00 pm daily. However, in February 2005, it was replaced by pay-per-view channel Xtraview, before itself being removed in August 2005 due to capacity contracts running out with terrestrial broadcaster Channel 4. Xtraview was replaced by encrypted Top Up TV channels previously broadcast on the slot owned by Channel 4, of which are expected to be replaced themselves with new channels launched by Five.

Film4 is a British free-to-air television channel owned by the Channel Four Television Corporation, that broadcasts films. It was launched on 1 November 1998. While its standard-definition channel is available as a FTA network, its high-definition variant is offered as a pay television service.

Top Up TV was a pay TV service in the United Kingdom which launched in March 2004, operating on the digital terrestrial television platform. The aim of the service was to "top up" Freeview customers by providing additional content and services through encrypted TV channels unavailable to other viewers.

Xtraview was a British pay-per-view television channel run by Top Up TV. It replaced Top Up TV Sampler, a promotional channel showing Top Up TV's latest offers presented by Alice Beer. Xtraview showed a selection of programs from the Top Up TV package, at a cost of one pound per day. It ceased broadcasting on 31 August 2005 at 11.00pm due to lack of space on the DTT platform after Top Up TV's short-term lease with Channel 4 on multiplex 2 expired in September 2005, and has since been replaced with More 4. The official reason stated on the channel is that it is being "modified", however no developments were made and this screen was shown from its demise to March 2006. 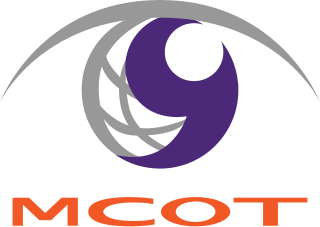 MCOT Public Company Limited (MCOT), formerly known as the Mass Communication Organization of Thailand (Thai: บริษัท อสมท จำกัด, is a Thai state-owned public broadcaster. It owns and operates a number of radio and television stations in Thailand. It is based in Bangkok. At present, MCOT runs seven national, one international, 52 provincial, one district radio station, two television channels, and 2 satellite television channels. Their motto is "Always Serving the Public". On their website MCOT uses the slogan "Digitally beyond". MCOT's acting president is Mr Piset Chiyasak.

QVC UK is a television shopping channel broadcast from the United Kingdom to the United Kingdom and Ireland. It was formed in 1993 when QVC, Inc. agreed to a deal with Sky TV to create a UK version of the US channel. "QVC – The Shopping Channel" first broadcast in the UK on 1 October 1993.

This is a timeline of the history of Sky News, a British free-to-air television news channel and organisation.