The Topaz Omega is a sailing dinghy created by Topper International designed for between 1 and 7 crew members. It is sailed at many clubs around the world [2] and is an ISAF 'Learn to Sail' class. [3]

Topper International is an international builder and marketing company of sailboats and dinghies supported by a worldwide dealer network and class associations.

The Omega is an incredibly versatile three-sail boat that is fantastic for club racing, teaching or estuary sailing and picnicking. This boat is the largest in the Topper range (the hull can comfortably hold up to six). The beamy, chined hull inspires great confidence making the Omega stable and easy to control. The huge, spacious cockpit with its gnav kicker offers roomy and comfortable sailing and is an ideal teaching platform for large groups. The boat can be sailed single-handedly due to the zip-reefing system in the mainsail adding yet another layer of versatility.

The Omega is a versatile dinghy that can be used for learning to sail, to club racing. [4] The Omega, the largest of the topper range, is a good boat for training, being stable with plenty of room for three trainees and an instructor. The boat has a Gnav kicker system which gives you more room in the cockpit. 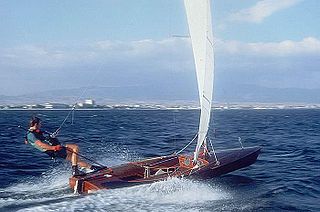 The Mirror is a popular sailing dinghy with more than 70,000 built.

The Albacore is a 4.57 m (15 ft) two-person planing dinghy, for competitive racing and lake and near-inshore day sailing. Hulls are made of either wood or fibreglass. The basic shape was developed in 1954 from an Uffa Fox design. Recent boats retain the same classic dimensions, and use modern materials and modern control systems, making it ideal for the recently graduated college racer, as well as those with less experience.

The Topper is an 11 foot 43 kg (95 lb) sailing dinghy designed by Ian Proctor. The Topper is a one-design boat sailed mostly around the British Isles. It was recognised as a World Sailing Class. The boat is constructed from polypropylene, and is popular as a racing boat or for sail training. The class association (itca) organise racing events, which range from small travellers to major championships. The RYA run squads alongside the events; in these squads are talented young sailors who are given specialist race coaching.

The International Laser Class sailboat, also called Laser Standard and the Laser One is a popular one-design class of small sailing dinghy. According to the Laser Class Rules the boat may be sailed by either one or two people, though it is rarely sailed by two. The design, by Bruce Kirby, emphasizes simplicity and performance. The dinghy is manufactured by independent companies in different parts of the world, including LaserPerformance, Performance Sailcraft Australia (Oceania) and Performance Sailcraft Japan.

The Wayfarer is a wooden or fibreglass hulled fractional Bermuda rigged sailing dinghy of great versatility; used for short 'day boat' trips, longer cruises and for racing. Over 11,000 have been produced as of 2016. 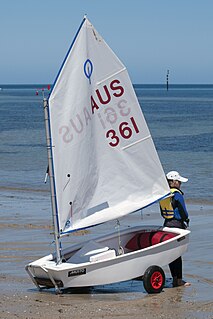 The Optimist, also known as the ‘opti’, 'oppie' or 'bathtub', is a small, single-handed sailing dinghy intended for use by children up to the age of 15. Contemporary boats are usually made of fibreglass, although wooden boats are still built. 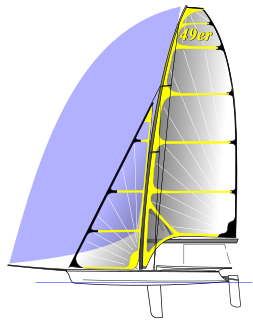 The 49er and 49er FX is a two-handed skiff-type high-performance sailing dinghy. The two crew work on different roles with the helm making many tactical decisions, as well as steering, and the crew doing most of the sail control. Both of the crew are equipped with their own trapeze and sailing is done while cantilevered over the water to the fullest extent to balance against the sails.

The International 420 Dinghy is a dinghy with centreboard. The name refers to the boat length in centimeters, being 4.2 meters. The hull is fiberglass with internal buoyancy tanks. The 420 has a bermuda rig and an optional spinnaker and trapeze. It has a large sail-area-to-weight ratio, and is designed to plane easily. It can be rigged to be sailed single-handed or double-handed. The 420 is an International class recognized by the International Sailing Federation.

The Sunfish is a personal size, beach launched sailing dinghy. It features a very flat, board like hull carrying a lateen sail mounted to an un-stayed mast.

The Laser 4000 is a well known racing dinghy crewed by two persons. Its one-design weight-equalised system enables physically differing sailors to compete on a level playing field. It is most popular in Europe, particularly the UK, France and Italy.

The Laser 3000 is a racing sailing dinghy crewed by two persons with a trapeze for the crew. Launched in 1996, the 3000 was developed from the Laser 2, using the original Frank Bethwaite-designed planing hull combined with a brand new self-draining deck by Derek Clark. Clark also re-designed the rig, using spars and sails from premium proprietary sources and replacing the symmetric spinnaker of the Laser 2 by a larger asymmetric spinnaker (gennaker). The gennaker is chute-launched and retrieved using a single halyard line, and is set on a retractable bowsprit. Helm balance and handling were improved using a shorter-footed mainsail with two full-width battens giving a larger roach. A mast with conventional spreaders replaced the now-unusual diamond arrangement of the Laser 2. 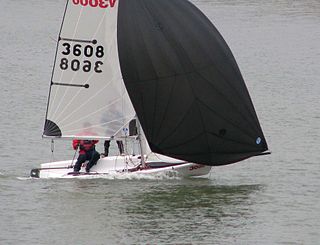 The 3000(formally the Laser 3000) is a racing sailing dinghy crewed by two persons with a trapeze for the crew. Launched in 1996 as the Laser 3000, the 3000 was developed from the Laser 2, using the original Frank Bethwaite-designed planing hull combined with a new designed self-draining deck by Derek Clark. Clark also re-designed the rig, using spars and sails from premium proprietary sources and replacing the symmetric spinnaker of the Laser 2 by a larger asymmetric spinnaker (gennaker). The gennaker is chute-launched and retrieved using a single halyard line, and is set on a retractable bowsprit. Helm balance and handling were improved using a shorter-footed mainsail with two full-width battens giving a larger roach. A mast with conventional spreaders replaced the now-unusual diamond arrangement of the Laser 2.

The RS Tera is a one-man monohull dinghy in the RS Sailing range of sailing boats. It is recognised by the International Sailing Federation (ISAF) as an international class, and is a popular boat for beginners and for children to race.

The RS Vision is a Sailing dinghy created by RS Sailing designed for 2 crew members. It can, however, be sailed by a larger crew or be single handed. It is sailed at many clubs around the world.

The Topaz Magno is a Sailing dinghy created by Topper International designed for between 1 and 4 crew members, though usually 2.

The Topaz Taz is a Sailing dinghy created by Topper International designed for between 1 or 2 children. The Taz is an ISAF ‘Learn to Sail’ class.

The Topaz Vibe is a British sailing dinghy designed by Ian Howlett and Rob White. Built by Topper International, it was first introduced in 2006. There are two models, the Vibe and the Vibe X, with the latter carrying larger sails. The Vibe is a World Sailing Learn to Sail class.

The Minisail is a 13 foot single-handed dinghy which was designed by Ian Proctor in 1959 and became popular in the 1960s. It was the predecessor to the Topper and was the first British production boat to popularise the idea of the "sailing surfboard". As the Topper gained popularity in the 1980s, the Minisail disappeared from the scene. However, on 28th August 2011, a group of enthusiasts restarted the Minisail Class Association, which now has a small but committed following mainly in north-west Europe.

George Cockshott was educated at Uppingham and King’s College Cambridge. He resided at Southport, and was Vice-Commodore of Southport Corinthian Yacht Club. As a boy he took a keen delight in building and sailing model yachts, and while at school built for himself a rowing and sailing boat. He joined the Cambridge University Sailing Club shortly after its formation in 1893. On coming down from Cambridge, he spent several seasons as ‘forward hand’ racing in the Southport ¾-rating class and the Menai Straits 1-rating class. He owned the Unona, a half decked centre board boat, and designed and sailed for two seasons a boat in a ‘restricted class’ of 12-foot dinghies with a fair measure of success. In 1901 he became owner of the 12 ton cutter Eurynome, a boat long famous as a cruiser-racer in Irish, Clyde and Welsh waters, and though Cockshott preferred cruising to racing, considerably reduced her spars and canvas, she was successfully raced under his flag for several seasons in a strong handicap class. In 1904, he again entered the ¾-rating class as part owner of Imp. He also owned the yacht Sthoreen, an able and comfortable cruising yawl of 16 tons, built from his own designs, and launched in the spring of 1906. Cockshott has also turned his attention to yacht architecture, and, in addition to his own yacht, one 20 tonner, several smaller yachts, and motor launches, and tender to the Southport lifeboat, have been built from his designs. He designed a new racing class for the West Lancashire Yacht Club from which six boats are now being built.