Topless Women Talk About Their Lives

Topless Women Talk About Their Lives is a 1997 New Zealand film about a group of twenty something friends. It was based on a TV series. [1]

The Front Lawn was a New Zealand musical/theatrical duo founded by Don McGlashan and Harry Sinclair in 1985. In 1989 and 1990, they were joined by actor Jennifer Ward-Lealand. The Front Lawn were known for their live performances, and toured extensively in New Zealand, Australia, Europe and America. They released two albums and made three short films.

Andrew studied dramatic arts at college in the 80's and went directly from there to playing ‘Brad’ in the 1986 national tour of ‘The Rocky Horror Show’ around New Zealand. Cast members of that tour included former New Zealand Prime Minister Sir Robert Muldoon and a young Russel Crowe. Andrew toured Rocky Horror again in 1988 in the national tour of Australia and performed at the World Expo in Brisbane on the River Stage to an estimated audience of over 15,000 people.

Mondo Topless is a 1966 pseudo documentary directed by Russ Meyer, featuring Babette Bardot and Lorna Maitland among others. It was Meyer's first color film following a string of black and white "roughie nudies", including Faster, Pussycat! Kill! Kill! While a straightforward sexploitation film, the film owes some debt to the French New Wave and cinéma vérité traditions, and is known to some under the titles Mondo Girls and Mondo Top.

The Naked Samoans is a New Zealand comedy group made up of Polynesian entertainers, most of whom are Samoan. The group performs social humour and satire that attracts a broad audience, especially among white New Zealanders, without sacrificing the group's Pacific Island identity. The group has gained success in both television and film projects as well as in theatre, which remains their primary base in entertainment. The members of this group are David Fane, Mario Gaoa, Shimpal Lelisi, Oscar Kightley, Robbie Magasiva and Jerome Leota.

I Really Hate My Job is a 2007 British comedy film directed by Oliver Parker and starring Neve Campbell, Shirley Henderson, Alexandra Maria Lara, Anna Maxwell Martin, Oana Pellea, and Danny Huston as himself. It is an independent film distributed by TriStar Pictures and produced by 3DD Productions.

Willa O'Neill is an award-winning actress from New Zealand. She is known to fans of Hercules: The Legendary Journeys for her recurring role as "Althea" and Xena: Warrior Princess fans know her from her repeat role as "Lila."

Blurred is a 2002 Australian film about groups of school leavers travelling to schoolies week on the Gold Coast. It was directed by Evan Clarry and written by Phil Mitchell and Kier Shorey. 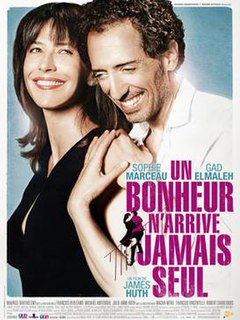 Happiness Never Comes Alone is a 2012 French romantic comedy film directed by James Huth and starring Gad Elmaleh, Sophie Marceau, and Maurice Barthélémy. Written by James Huth and Sonja Shillito, the film is about a young jazz musician who enjoys seducing young women. His carefree life of pleasure is interrupted when he meets an older woman with three children, two ex-husbands, and a thriving professional life, and the two, who have nothing in common, become involved in a romantic relationship.

Strange Planet is a 1999 Australian comedy directed by Emma-Kate Croghan and starring Claudia Karvan. It was Croghan's follow up to Love and Other Catastrophes and used many of the same cast and crew.

A Cold Summer is a 2003 Australian film. The writing of the film was highly collaborative with input from all the actors.

Sample People is a 2000 Australian film, directed by Clinton Smith. It is about the entanglements of twelve people in one weekend in Sydney.

Walk the Talk is a 2001 Australian film directed by Shirley Barrett and starring Sacha Horler and Sal Coco. It was funded by David Geffen.

In a Savage Land is a 1999 Australian film set in New Guinea just prior to and during World War Two. It won the 2000 ARIA Music Award for Best Original Soundtrack.

"Not Given Lightly" is a song by New Zealand singer-songwriter Chris Knox. It was released in 1989 and is among Knox's best known songs. While the song did not chart when originally released in 1989, it has since become well known from its use in New Zealand film and television productions, especially in a television advertisement for Vogel's bread in 2007.