The Toquaht Nation is a modern treaty government located on the west coast of Vancouver Island in British Columbia, Canada. It is a member of the Maa-nulth Treaty Society and the Nuu-chah-nulth Tribal Council.

In terms of citizenship, the Toquaht Nation is one of the smallest First Nations within the Nuu-chah-nulth Tribal Council (NTC). The Nation has about 150 citizens in total. There are roughly 20 people currently living at the main village of Macoah, which is accessible off Highway 4 on Kennedy Lake. Most remaining citizens live in Ucluelet, Port Alberni, Nanaimo and Victoria.

Historically, the Toquaht Nation, like many Nuu-chah-nulth Nations, maintained a hereditary system of governance. Under the Maa-nulth First Nations Final Agreement, however, Toquaht moved towards a "hybrid" hereditary/elected system, which maintains traditional governance approaches. This hybrid model has two hereditary leaders holding permanent seats on Council, with three other Councillors elected every four years. The government structure under the Toquaht Constitution consists of a Legislative branch, an Executive branch, and a People’s Assembly. The Toquaht Nation reserves the right to establish a judicial branch as well.

In January 2009, in a traditional ceremony Grand Chief Bert Mack passed on Chieftainship to Anne Mack, who succeeds him after a reign of over 50 years.

The Toquaht Nation has a small administrative structure which oversees social and economic development programs, treaty implementation, and governance coordination.

The Toquaht Nation and its citizens manage or own businesses including:

The implementation of the Maa-nulth First Nations Final Agreement freed the Toquaht Nation from the Indian Act and re-established self-governance and control over Toquaht traditional territories. Under the Maa-nulth treaty, Toquaht regained control of 1,489 hectares of land with an option to purchase 721 more hectares over 15 years. This was a significant increase to the 199 hectares of Indian Reserve lands that were held in trust for the Toquaht Nation under the Indian Act. 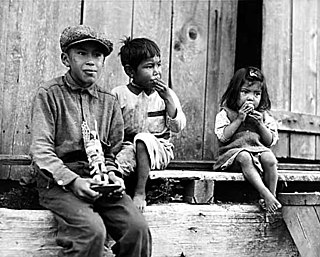 The Nuu-chah-nulth, also formerly referred to as the Nootka, Nutka, Aht, Nuuchahnulth or Tahkaht, are one of the indigenous peoples of the Pacific Northwest Coast in Canada. The term Nuu-chah-nulth is used to describe fifteen related tribes whose traditional home is on the west coast of Vancouver Island.

A Tribal Council is either: (1) a First Nations government in Canada or, an association of Native American bands in the United States; or, (2) the governing body for certain tribes within the United States or elsewhere. In both countries they are generally formed along regional, ethnic or linguistic lines.

The Kyuquot/Cheklesath First Nation is a First Nations government based at Kyuquot, located on the outer coast of Kyuquot Sound, on the west coast of Vancouver Island in British Columbia, Canada. It is a member of the Nuu-chah-nulth Tribal Council.

The Ahousaht First Nation is a First Nation government based on the west coast of Vancouver Island in British Columbia, Canada, focused on the community of Ahousaht, British Columbia. It is a member of the Nuu-chah-nulth Tribal Council. It is led by Chief, A-in-chut Shawn Atleo and the Tyee Haw'iilth - Maquinna. 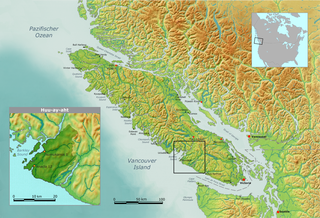 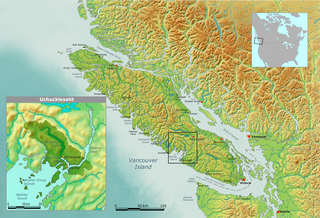 The Clayoquot Sound Central Region Board (CRB) was created as a result of the historic two-year Interim Measures Agreement (IMA) in 1994. This agreement acknowledged that "the Ha'wiih of the First Nations have the responsibility to conserve and protect their traditional territories and waters for generations which will follow". The IMA was a negotiated agreement between the Central Region Chiefs (CRC) and the Province of British Columbia to define the terms of co-management of land and resource use and operations during treaty negotiations.

The Nuu-chah-nulth Economic Development Corporation (NEDC) was incorporated in 1984 under the Canada Corporations Act as a not-for-profit organization. Although it is not tied directly to the NTC, it was formed to help the Nuu-chah-nulth people achieve economic and social independence by providing financial assistance and advisory services. NEDC manages a number of funding programs aimed at enhancing economic development in the region.

The Nuu-Chah-Nulth Employment and Training Program (NETP) is a program that seeks to help all aboriginal people with education and training. The overall mission of the NETP is to increase the quality of life, self-reliance and economic prosperity of aboriginal people and organizations within the Nuu-chah-nulth Tribal Council region by supporting and empowering career and employment aspirations.

Uu-a-thluk means "taking care of" in the Nuu-chah-nulth language spoken on the west coast of Vancouver Island and is the Nuu-chah-nulth aquatic management organization. This organization was established with financial support from the federal government in recognition of the need to manage aquatic resources wisely together with the many sectors and interests working in the area. The philosophy that drives the organization is the idea that working cooperatively with other governments, communities and individuals is required to achieve sustainable and fruitful management.