Tor Helness (born 25 July 1957) [1] is a Norwegian professional bridge player. He was a stalwart on Norway junior and open teams for thirty years before moving to Monaco. Through 2012 he has won four world championships in teams-of-four competition. [2] As of October 2016 he ranks second among Open World Grand Masters and his regular partner Geir Helgemo ranks first. [3]

From 1979 to 1981, Helness represented Norway on both its junior and open teams. In 1980 the juniors were European champions (there was yet no world championship) and the open team reached the World Team Olympiad semifinal. For 25 years the open team regularly reached European semifinals, and it won world silver medals in 1993 and 2001. [2] [4] Norway finally won the world team championship in 2007, the biennial Bermuda Bowl, with a team of six including Helness–Helgemo as anchor pair. [5]

The couple Tor and Gunn Helness won the Mixed Pairs (an event without a world championship) at the 2005 European Open Championships. [6] At the inaugural, 2008 World Mind Sports Games in Beijing, Tor Helness won the Open Individual gold medal and Geir Helgemo won the silver. Norway's open team won the bronze. [2]

From 2011 Helness and his regular Norwegian partner Geir Helgemo are full-time members of a team led and paid by the Swiss real estate tycoon Pierre Zimmermann, under contract expiring 2016. The team finished third in the 2010 world championship, not yet full-time, and it will compete in the European Bridge League open championship this spring. From 2012 all six members will be subjects of the Prince of Monaco and the team will be a prohibitive favorite to represent Monaco internationally in bridge events. [7]

The Bermuda Bowl is a biennial contract bridge world championship for national teams. It is contested every odd-numbered year under the auspices of the World Bridge Federation (WBF), alongside the Venice Cup (women) and the d'Orsi Bowl (seniors). Entries formally represent WBF zones as well as nations, so it is also known as the World Zonal Open Team Championship. It is the oldest event that confers the title of world champion in bridge, and was first contested in 1950. The Bermuda Bowl trophy is awarded to the winning team, and is named for the site of the inaugural tournament, the Atlantic archipelago of Bermuda.

Jeffrey John (Jeff) Meckstroth is an American professional contract bridge player. He is a multiple world champion, winning the Bermuda Bowl on USA teams five times. He is one of only ten players who have won the so-called triple crown of bridge: the Bermuda Bowl, the World Open Pairs and the World Team Olympiad. As of May 16, 2016, he was the fifth-ranking World Grand Master. For decades Meckstroth has been in a regular partnership with Eric Rodwell and together, nicknamed "Meckwell", they are one of the most successful bridge partnerships of all time. They are well known for playing an aggressive and very detailed system that derived from Precision Club. 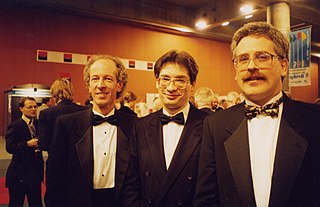 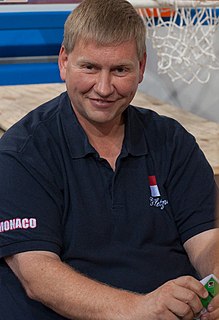 Geir Helgemo is a professional bridge player who was born in Norway but is now a citizen of Monaco. Through 2012 he had won three world championships in teams-of-four competition. As of August 2018 he ranked first among Open World Grand Masters and his regular partner Tor Helness ranked second. 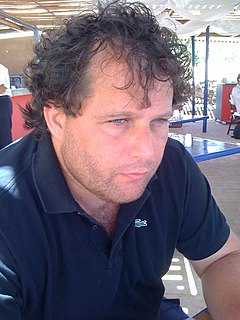 Fulvio Fantoni is an Italian international bridge player. He is a six-time world champion, a World Grand Master of the World Bridge Federation After Pedro (WBF), and the WBF first-ranked player as of December 2011. He is one of 10 players who have won the Triple Crown of Bridge. 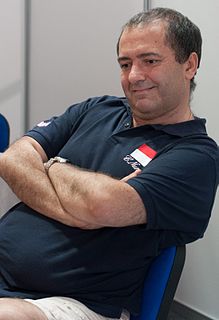 Adam Artur Żmudziński is a Polish bridge player. After 2014 competition, he ranked 22nd among Grand Masters by World Bridge Federation (WBF) masterpoints, five places behind his longtime partner Cezary Balicki. They ranked 26–27th among more than 100 all-time Grand Masters by placing points that do not decay over time.

Kit Woolsey is an American bridge and backgammon player. He was inducted into the ACBL Hall of Fame in 2005.

Terje Aa is a Norwegian bridge player, WBF World Life Master, and regular member of the Norwegian team since 1993. Teams on which he was a member have placed in the top three of the World Bridge Federation European and World Championships 11 times between 1984 and 2008.

Glenn Frode Grøtheim is a Norwegian bridge player, WBF World Grand Master, winner of the 2007 Bermuda Bowl and a regular member of the Norwegian team since 1987.

The World Transnational Open Teams Championship is a major side event conducted by the World Bridge Federation during the semifinal and final stages of its world championships for national teams at contract bridge—the Bermuda Bowl, Venice Cup, and Senior Bowl. New teams may enter the Transnational, as well as national teams eliminated before the semifinals of the main events—Open, Women, and Seniors respectively. It is not required that all team members be from one country, hence the term transnational. A series of Swiss matches qualifies eight teams for three knockout rounds which conclude during the finals of the main events.

The World Junior Teams Championship is a bridge competition for zonal teams of players up to about 25 years old.

Robert J. (Bobby) Levin is an American professional bridge player, from Aventura, Florida. He was the youngest winner of the Bermuda Bowl world championship for national teams from 1981 until 2015, when 19-year old Michal Klukowski of Poland succeeded him. Levin is also a five-time winner of the Cavendish Invitational Pairs, the world's leading contest for cash prizes, with his regular partner Steve Weinstein. As of June 2013, Levin ranks number 20 among Open World Grand Masters and his wife Jill ranks number 21 among Women World Grand Masters.

This is a list of the top ten bridge players in the world according to the World Bridge Federation 'Open Ranking' by Master Points (MPs) as maintained by the World Bridge Federation. Master Points earned more than one year ago are reduced annually by 15%. The list also includes the player's lifetime accumulation of Placing Points (PPs). Accordingly, the table data is time sensitive and represents the standings based upon their recent performance as posted by the WBF on October 11, 2012. There has been no update as of March 14, 2014. 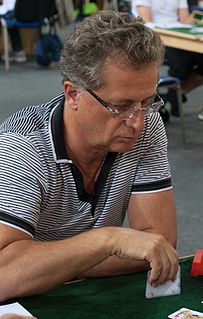 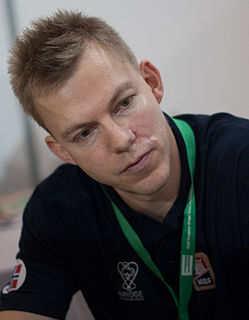 Boye Brogeland is a Norwegian professional bridge player. After a successful junior career, he won three Bermuda Bowl medals with the Norwegian team, including the gold in Shanghai 2007, and several North American Bridge Championships. He came into public focus in 2015 when he led a campaign against cheating in bridge, exposing wrongdoing of several top pairs, for which he received public recognition.