Torched is a 2004 horror short film directed by Ryan Nicholson and written by Vince D'Amato.

While heading out to work, university hospital nurse Deanna is tased and raped in her apartment elevator by a hooded man wearing a surgical mask and medical gloves. The next day, the traumatized Deanna subdues a burglar who breaks into her apartment using the rapist's abandoned stun gun. Deanna, convinced the intruder is the same man who raped her, ties the burglar up, strips him down to nothing but his underwear and balaclava, and takes some of his blood. At work, Deanna steals urine samples, makes plans to go out with a friend and co-worker named Leanna on Thursday, and asks her boss, Doctor Tyson, to compare the burglar's blood to a swab of semen she had collected after being raped. Deanna tells Doctor Tyson that a friend was raped, and that the blood belongs to her ex-boyfriend, who she suspects was her assailant. Back at home, Deanna tortures the burglar by covering him in the urine samples, burning him with a blow torch, and jabbing him with syringes.

When Thursday arrives, Deanna goes out to a nightclub with Leanne, and hours later returns to her building severely intoxicated. While stumbling up to her apartment, Deanna bumps into a neighbor and acquaintance named Trevor, who she seduces and has sex with. A relationship develops between the two, as Deanna becomes further unhinged, and begins suffering from nightmares. She also continues to torture the burglar, dressing in fetish-wear attire for the occasions, and attaining an almost sexual gratification from the man's suffering. One day, Deanna gives the burglar a handjob, and afterward destroys his genitals with needles and the blow torch.

A week after castrating the burglar, Deanna hires a gigolo drug addict to sodomize him. While the addict has his way with the burglar, Deanna leaves and goes to Trevor's apartment. There, Deanna discovers circumstantial evidence indicating Trevor was her rapist, walks in on Trevor and Leanne having sex, and attacks them with a circular saw that was among Trevor's carpentry tools. Deanna beheads Leanne with the saw, and bashes Trevor's face in with it. Returning to her apartment, Deanna murders the gigolo by stabbing him in the neck with a knife after he reveals the burglar had died at some point during the rape. Deanna then goes to the hospital in search of Doctor Tyson, spotting him seated in his parked car, dressed like her rapist and surrounded by sadistic pornography and stun guns identical to the one she was attacked with. When Doctor Tyson tries to pull her into the car, Deanna jams a cigarette lighter into one of his eyes, and knocks him out with one of the stun guns. Having finally found her rapist, Deanna abducts Doctor Tyson, and the film ends as she prepares to torture him.

Torched was first released in edited form as a segment in co-creator Creepy Six Films's women's revenge-themed anthology Hell Hath No Fury on March 6, 2007. [2] This version of the film was later re-released by Creepy Six, with commentary by Vince D'Amato, Ryan Nicholson, Peter Speers, as part of a DVD double feature with Sex and Death: 1977 on February 8, 2008. [3]

An uncut version of Torched was released on DVD by Plotdigger Films in 2010. This edition was limited to 666 copies, and included a commentary and interview with Ryan Nicholson, and a fifteen-minute making-of featurette titled Behind the Burn: The Making of Torched. [4]

Torched was praised by Film Bizarro, which wrote "Even though Torched may lack the realism that's in a movie like Irréversible and is over-the-top with its violence; it is still plenty shocking and brutal enough that I believe it qualifies as one of the more nasty rape-revenge films to be made. It isn't just a shallow exploitation film, there is some genuine character development in the movie, and while the rape scene itself didn't really have the punch that other movies have, the torture and balls-out violence in the end will leave the viewers both disturbed and satisfied. [5] A perfect score of seven was awarded by Independent Flicks, which stated "Torched is brutal, sick and twisted! It's a disturbing and creepy film and I recommend it highly to hardcore horror fans!" [6]

The Worldwide Celluloid Massacre had a negative response to the film, calling it "Amateurish extreme sickness". [7] Almost every aspect of Torched was criticized by Soiled Sinema, which felt that it offered nothing of interest besides admittedly impressive gore, and unintentional hilarity. [8]

Ron Raphael Braunstein, better known by his stage-name Necro, is an American rapper from Brooklyn.

Lawrence Bernard "Larry" Singleton was an American criminal known for perpetrating an infamous rape and mutilation of adolescent hitchhiker Mary Vincent in California in 1978. He raped Vincent and cut off her arms, then left her to die in a culvert off the Interstate 5 in Del Puerto Canyon, California. Vincent managed to crawl up to safety and later acted as a key witness against the rapist. Released from prison on good behavior after serving 8 years of his 14-year sentence, he later murdered Roxanne Hayes, a mother of three. On February 19, 1997, police found Singleton covered in blood after stabbing her in his new home. 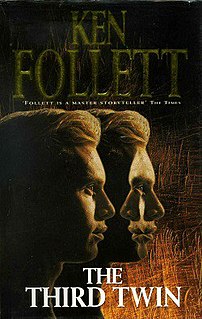 The Third Twin is a techno-thriller by the British writer Ken Follett and in 1996. A New York Times bestseller, the book deals with genetic engineering and the nature and nurture debate through the subject of identical twins raised apart.

The Pre-Fix for Death is the third studio album by American horrorcore musician Necro, released on September 21, 2004 by Psycho+Logical-Records. Unlike his previous albums, The Pre-Fix for Death sees Necro fusing death metal into several of the album's tracks. It is also the first album to feature live instrumentation by Necro himself. 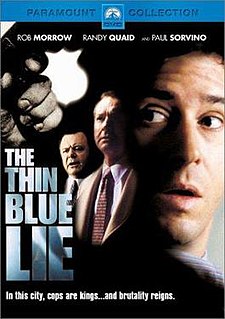 The Thin Blue Lie is a 2000 television film directed by Roger Young and starring Rob Morrow, Randy Quaid, and Paul Sorvino. It was released on August 13, 2000. The title is a reference to the phrase "thin blue line" used to describe the hypothetical role of law enforcement as the line between order and chaos.

John Schneeberger is a North Rhodesian-born former physician who drugged and raped one of his female patients and his stepdaughter while a physician in Canada. For years, he evaded arrest by implanting a fake blood sample inside a plastic tube in his arm to confound DNA tests.

Dispara! is a 1993 Spanish drama film directed by Carlos Saura, starring Francesca Neri and Antonio Banderas. The story is a revenge tragedy.

Gutterballs is a 2008 Canadian slasher comedy film written and directed by Ryan Nicholson.

Death Wish franchise is an American action-crime-drama film series based on the 1972 novel by Brian Garfield. The films follow the character Paul Kersey, portrayed by Charles Bronson in the original series, and Bruce Willis in the 2018 remake. While the first film received mixed reviews, the subsequent sequels, as well as the remake, were panned by critics and the series made $87 million against a combined production budget of $61 million.

Artemisia is a 1997 French-German-Italian biographical film about Artemisia Gentileschi, the female Italian Baroque painter. The film was directed by Agnès Merlet, and stars Valentina Cervi and Michel Serrault.

Toyah Battersby is a fictional character from the British soap opera Coronation Street, played by Georgia Taylor. Toyah and her family were introduced to the serial by executive producer Brian Park in a bid to increase falling ratings. Actress and singer Toyah Willcox gave the producers permission to name the youngest member of the Battersby family after herself, since the character was said to be born during the height of her career. Taylor originally auditioned for the part of Zoe Tattersall, but was cast as Toyah instead. The role marked her acting debut. She made her first screen appearance during the episode broadcast on 4 July 1997.

Hanger is a 2009 Canadian horror film directed by Ryan Nicholson and written by Nicholson with Patrick Coble. The film is banned in Australia and Germany.

Julia is a 2014 American neo-noir horror film and the feature film directorial debut of Matthew A. Brown. The film stars Ashley C. Williams as a woman who seeks revenge for her brutal rape. It had its world release on 19 July 2014 at the Puchon International Fantastic Film Festival.

Mardaani 2 is a 2019 Indian Hindi-language action thriller film and a sequel to the 2014 film Mardaani. It is directed by Gopi Puthran who wrote the previous film, marking his directorial debut, and backed through Yash Raj Films. Rani Mukerji reprises her role of police officer Shivani Shivaji Roy from the previous film and the film shows how she goes up against a 21-year-old rapist and murderer played by newcomer Vishal Jethwa.