Torhild, also written Thorhild, ThorildTorild, is a Norwegian feminine given name. Notable persons with that name include: 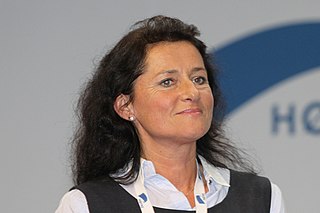 Torhild Aarbergsbotten is a Norwegian politician for the Conservative Party.

Torhild Johnsen is a Norwegian politician for the Christian Democratic Party.

Thorild Olsson was a Swedish runner who competed in the 1912 Summer Olympics. He helped the Swedish 3000 m relay team in finishing second, but did not receive a medal as only the three best runners from a team were counted, while he was fourth. He failed to reach the final of the individual 5000 m event.

Tor is a Nordic masculine given name derived from the name of the Norse god Thor. It may refer to

Rolf is a male given name and a surname. It originates in the Germanic name Hrolf, itself a contraction of Hrodwulf (Rudolf), a conjunction of the stem words hrod ("renown") + wulf ("wolf"). The Old Norse cognate is Hrólfr. An alternate but less common variation of Rolf in Norway is Rolv.

Torhild Skogsholm is a Norwegian politician. She was Minister of Transport and Communications from 2001 to 2005. She is now the director of the Oslo tram company Oslo Sporvognsdrift.

Lasse is a common masculine given name in Nordic countries. It is also often a nickname for people named Lars or Lauri.

Kjell is a Scandinavian male given name. In Denmark, the cognate is Kjeld or Keld. The name comes from the Old Norse word kętill, which means "kettle" and probably also "helmet" or perhaps "cauldron". The Old Norse form of the name was Ketill, the Old Swedish form was Kjætil and the Old Danish form was Ketil. An equally likely meaning is a source, a hope that the boy will get ample resources to draw upon later in life.

Henrik is a male given name of Germanic origin, primarily used in Scandinavia, Estonia, Hungary and Slovenia. In Poland, the name is spelt Henryk but pronounced similarly. Equivalents in other languages are Henry (English), Heikki (Finnish), Henryk (Polish), Hendrik (Dutch), Heinrich (German), Enrico (Italian), Henri (French), Enrique (Spanish) and Henrique (Portuguese). It means 'Ruler of the home' or 'Lord of the house'.

Johnsen is a patronymic surname meaning "son of John". Notable people with the surname include:

Fritiof, Fritjof, Fridtjof or Friðþjófur is a Scandinavian masculine given name derived from Old Norse.

Inger is a Scandinavian feminine given name, originally short for a name in Ing-, either Ingrid or Ingegerd.

Events from the year 1792 in Sweden

Events from the year 1781 in Sweden

Torhild Bransdal is a Norwegian politician. She was elected representative to the Storting for the period 2017–2021 for the Christian Democratic Party.