The Tori (Estonian : tori hobune) is a horse originating in continental Estonia.

The Tori comes mainly in the colors black, bay, palomino, chestnut and liver chestnut. Today's Tori is a harness horse that has a clean and solid build. It has a large to medium-sized head, a shortened poll, a neck that is medium in length and fleshy, withers that are average in height, a back that is long and flat, a loin that is broad as well as a croup that is broad, and the horse is well muscled. The Tori has a very broad and deep chest, and limbs that are clean and properly set. Tori stallions at the studs are usually 162 cm high at the withers. This breed has a high fertility ratio, with 86 foals per 100 mares.

From 1890 to 1950, this breed was developed in Estonia at the stud in Tori, Pärnumaa. It was developed by crossing native Estonian mares with European crossbred stallions. This breed was mainly founded by a stallion named Hetman, whose sire was Stewart, a crossbreed of a Norfolk Trotter and an Anglo-Norman mare. The Tori breed was formed by breeding Hetman and his sons. Thus, a valuable breeding nucleus rapidly formed, that slowed as signs of inbreeding depression were found in the 1930s. This deteriorated performance and robustness. To eliminate this inbreeding depression, Toris were crossed with Breton Post-horse stallions, and as a result, the massive type of Tori became widespread while the quality of the gaits declined. The need for a combination of utility and sporting qualities in horse led to crossings with Hanoverian, Holstein and Trakehner stallions. Recent horse breeders have been trying mainly to get a very light sport horse-type of horse, resulting in a rapid loss of purebred Tori.

The Groningen Horse is a Dutch horse breed developed for light draft and agricultural work. It is closely related to heavy warmblood breeds like the East Friesian and Alt-Oldenburger. The breed was nearly lost in the mid-20th century because a significant number of mares were used for crossbreeding to create the Dutch Warmblood, leaving few purebreds. 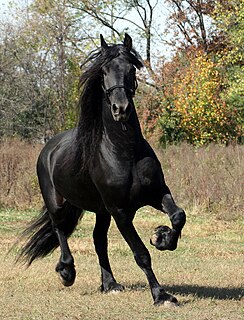 The Friesian is a horse breed originating in Friesland, in the Netherlands. Although the conformation of the breed resembles that of a light draught horse, Friesians are graceful and nimble for their size. It is believed that during the Middle Ages, ancestors of Friesian horses were in great demand as war horses throughout continental Europe. Through the Early Middle Ages and High Middle Ages, their size enabled them to carry a knight in armour. In the Late Middle Ages, heavier, draught type animals were needed. Though the breed nearly became extinct on more than one occasion, the modern day Friesian horse is growing in numbers and popularity, used both in harness and under saddle. Most recently, the breed is being introduced to the field of dressage.

The Kabarda or Kabardin horse is a breed from the Caucasus, currently part of the Kabardino-Balkaria region of Russia. Historically the breed has been known for at least 400 years, but its origins are probably as old as the Hittite civilization. These horses are noted for their endurance and ease to adapt in difficult environments.

The Ukrainian Riding Horse or Ukrainian Saddle Horse is a modern Ukrainian breed of warmblood sport horse. Breeding began in the years after the Second World War at the stud farm of Dnipropetrovsk in central Ukraine – at that time in the USSR – and later expanded to three other state stud farms. It derives from cross-breeding of Hanoverian, Thoroughbred and Trakehner stallions with local mares or with Hungarian Furioso, Gidran Arab or Nonius mares. It incorporates the last bloodlines of the extinct Orlov-Rostopchin or Russian Saddle Horse. It was bred to compete in show jumping, three-day eventing and dressage, but is also suitable as a general riding horse. 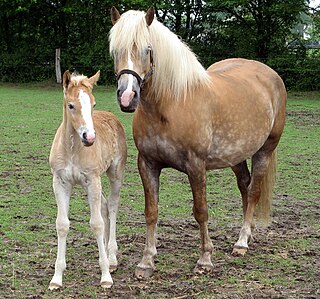 The Haflinger, also known as the Avelignese, is a breed of horse developed in Austria and northern Italy during the late 19th century. Haflinger horses are relatively small, are always chestnut with flaxen mane and tail, have distinctive gaits described as energetic but smooth, and are well-muscled yet elegant. The breed traces its ancestry to the Middle Ages; several theories for its origin exist. Haflingers, developed for use in mountainous terrain, are known for their hardiness. Their current conformation and appearance are the result of infusions of bloodlines from Arabian and various European breeds into the original native Tyrolean ponies. The foundation sire, 249 Folie, was born in 1874; by 1904, the first breeders' cooperative was formed. All Haflingers can trace their lineage back to Folie through one of seven bloodlines. World Wars I and II, as well as the Great Depression, had a detrimental effect on the breed, and lower-quality animals were used at times to save the breed from extinction. During World War II, breeders focused on horses that were shorter and more draft-like, favored by the military for use as packhorses. The emphasis after the war shifted toward animals of increased refinement and height. 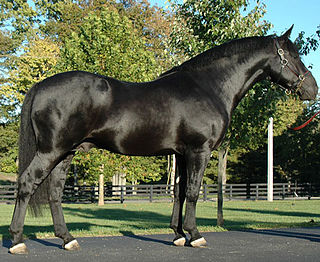 The Irish Draught horse is the national horse breed of Ireland which developed primarily for farm use. Today, they are especially popular for crossing with Thoroughbreds and warmbloods, producing the popular Irish Sport Horses which excel at the highest levels of eventing and show jumping.

The Murgese horse originated in the Murge, Apulia area of Italy during the Spanish rule, and was developed from Barb and Arabian horses. They are a hardy breed that is used mainly for cross-country riding, although they have also been used for light draft work. 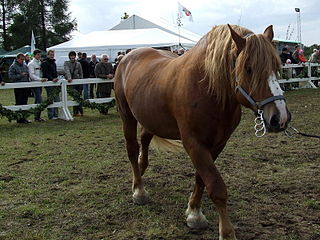 The Lithuanian Heavy Draught is a draught horse breed created in Lithuania during the 19th and 20th centuries. They are used mainly for heavy draught and farm work, as well as meat production and the improvement of other breeds. The breed is currently near extinction..

The Orlov Trotter is a horse breed with a hereditary fast trot, noted for its outstanding speed and stamina. It is the most famous Russian horse. The breed was developed in Russia in the late 18th century by Count Alexei Orlov at his Khrenovskoy stud farm near the town of Bobrov. The Orlovs emerged as the result of crossing various European mares with Arabian stallions.

The American Cream Draft is the only draft horse breed developed in the United States that is still in existence. A rare horse breed today, it is recognized by its cream color, known as "gold champagne", produced by the action of the champagne gene upon a chestnut base color, and by its amber eyes, also characteristic of the gene; the only other color found in the breed is chestnut. Like several other breeds of draft horses, the American Cream is at risk for the autosomal recessive genetic disease junctional epidermolysis bullosa. 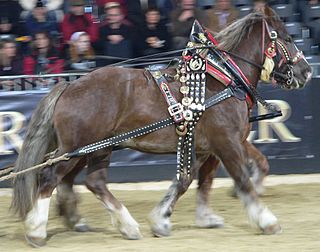 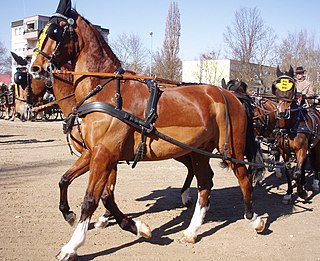 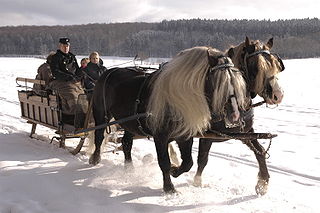 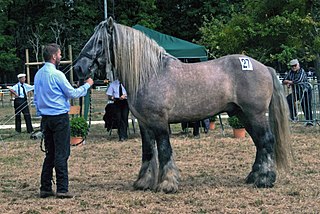 The Poitevin or Poitou is a French breed of draft horse. It is named for its area of origin, the former province of Poitou in west-central France, now a part of the region of Nouvelle-Aquitaine. It was formed in the seventeenth century when horses of Flemish or Dutch origin, brought to the area by engineers working to drain the Marais Poitevin, interbred with local horses. Although it has the size and conformation of a draft horse, the Poitevin has never been bred for draft abilities, and has been little used for draft work. Its principal traditional use was the production of mules. Poitevin mares were put to jacks of the large Baudet du Poitou breed of donkey; the resulting Poitevin mules were in demand for agricultural and other work in many parts of the world, including Russia and the United States. In the early twentieth century there were some 50,000 brood mares producing between 18,000 and 20,000 mules per year.

An Austrian Warmblood is a warmblood type of horse registered with the Arbeitsgemeinschaft für Warmblutzucht in Österreich. Although the studbook is made up of jumping and dressage horses from many other countries, the mare base consists of native horses with a long history. The AWÖ keeps an open studbook, in which mares and stallions must pass rigorous inspections before becoming breeding stock. 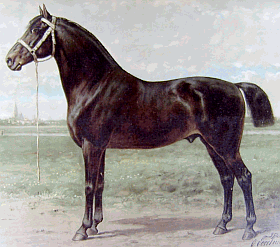 The Alt-Oldenburger and Ostfriesen are representatives of a group of horse breeds primarily from continental Europe called heavy warmbloods. The breed has two names because the same horse was bred in two regions in the most north-western part of Germany: East Frisia and the former grand duchy of Oldenburg. The name "Alt-Oldenburger" - alt meaning "old" - simply distinguishes this horse from its descendant, the modern Oldenburg, which is bred for sport. 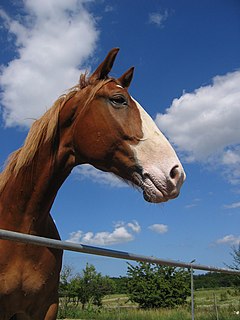 The Frederiksborger is Denmark's oldest horse breed. They were tremendously popular throughout the Renaissance and Baroque periods and were considered luxury items. Today, the breed is rare, but has a loyal following. Stallions and mares undergo studbook inspections before being allowed to breed. They are most often chestnut with white markings.

The Estonian Draft or Eston-Arden is a breed of draft horse developed in Estonia. They were developed from a cross of Estonian Native horses and Swedish Ardennes and officially recognized by the Estonian government in 1953. Population numbers have decreased since the early 1990s and today inbreeding is of significant concern and the breed is considered to be endangered by the Estonian government. Although originally used for heavy draft work, they are now used mainly for small-scale gardening.

The Estonian Native, Estonian: Eesti hobune, or Klepper, is an Estonian breed of small horse. It is strong and is resistant to disease. It is one of three recognised horse breeds in Estonia, the others being the Tori and the Estonian Draught, both of which derive from it. It has also influenced other Northern European breeds such as the Latvian Warmblood, and the Vyatka and the extinct Obva in Russia. It is an endangered breed; the population fell from about 16000 in the 1950s to approximately 500 in 2004.

Arved Toots was an Estonian agronomist and breeder of Tori horses.