As set out by the Police Services Act, there are seven members on the board: three are appointed by the provincial government, one is the Mayor of Toronto (or a designate), two are members of Toronto City Council, and one is a citizen selected by Toronto City Council. The Police Services Act also stipulates that a judge, justice of the peace, police officer, or a person who practices criminal law as a defence counsel may not be a member of a police board.

June Rowlands was a Canadian politician who was the 60th mayor of Toronto, Ontario, and the first woman to hold that office. She had previously been a longtime city councillor, an unsuccessful federal candidate, and a chair of the Metropolitan Toronto Police Commission. 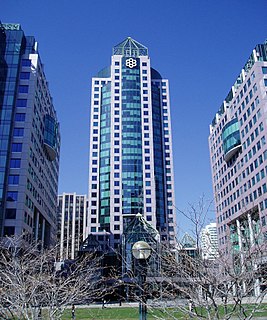 The Municipality of Metropolitan Toronto was an upper tier level of municipal government in Ontario, Canada, from 1954 to 1998. It was made up of the old city of Toronto and numerous townships, towns and villages that surrounded Toronto, which were starting to urbanize rapidly after World War II. It was commonly referred to as "Metro Toronto" or "Metro". 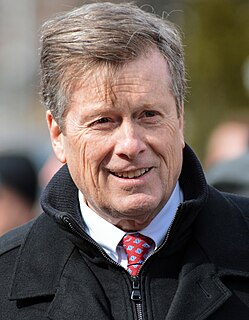 The mayor of Toronto serves as the political head of the city of Toronto, the chief executive officer of its municipal government, and the head of its council. The mayor is elected every four years alongside Toronto City Council. The role of the mayor includes representing the city, overseeing the administration of city divisions and municipal services, appointing chairs of standing committees, and serving as the head of City Council.

Roxanne Qualls is a former Democratic mayor of Cincinnati, Ohio, having served from December 1993 to November 1999. She also served a two-year term on the Cincinnati City Council prior to her service as mayor, having been elected in 1991. On August 8, 2007, the Charter Committee announced her appointment to fill the unexpired term of council member Jim Tarbell. Qualls was elected to a two-year term on Cincinnati City Council in November 2007, and again in 2009 and 2011. She served as Vice Mayor, the chair of the Budget and Finance Committee, chair of the Livable Communities Committee and chair of the Subcommittee on Major Transportation and Infrastructure Projects.

Allan F. Leach is a former transportation executive and politician in Ontario, Canada. In the 1970s, 1980s, and early 1990s he was the head of GO Transit and later the Toronto Transit Commission. He was a Progressive Conservative member of the Legislative Assembly of Ontario from 1995 to 1999, and was a prominent cabinet minister in the government of Mike Harris.

Howard Moscoe is a former city councillor in Toronto, Ontario, Canada, representing Ward 15 in the western part of Eglinton-Lawrence. Among the most prominent and longest-serving councillors in the city, he is also known for an outspokenness which has landed him in controversy at times. Moscoe is a member of the New Democratic Party. On August 31, 2010, after 31 years as an elected municipal politician, Moscoe announced his retirement from city council.

The Toronto Police Service (TPS) is a municipal police force in Toronto, Ontario, Canada, and the primary agency responsible for providing law enforcement and policing services in Toronto. Established in 1834, it was the first local police service created in North America and is one of the oldest police services in the English-speaking world.

The Toronto Catholic District School Board is an English-language public-separate school board for Toronto, Ontario, Canada, headquartered in North York. It is one of the two English boards of education in the City of Toronto, serving the former municipalities of Scarborough, North York, York, East York, Old Toronto and Etobicoke. With 91,000 students, the TCDSB is one of the largest school boards in Canada, and is the largest publicly funded Catholic school board in the world. Until 1998, it was known as the Metropolitan Separate School Board (MSSB) as an anglophone and francophone separate school district.

The Progressive Conservative Party of Ontario fielded a full slate of candidates in the 1995 Ontario provincial election, and won a majority government with 82 out of 130 seats. Many of the party's candidates have their own biography pages; information about others may be found here.

The Corporation of the City of Toronto, or simply the City of Toronto, is the public corporation that serves as the government of Toronto, Ontario, Canada. Its operations are governed by the elected Toronto City Council, under the rules set out in the City of Toronto Act. The mayor of Toronto is John Tory. Day-to-day operations of the government are managed by the city manager, a public servant, under the direction of the mayor and council. The mayor is a member of council and is also responsible for organizing council and running council meetings. The government employs over 35,000 public servants directly, as well as affiliated agencies such as the Toronto Police Service and the Toronto Transit Commission. Its operating budget was CA$13 billion in 2018, including over $1 billion for police services.

Guro Fjellanger was a Norwegian politician for the Liberal Party. She served as Minister of the Environment in the first cabinet Bondevik from 1997 to 2000. She was a private consultant and a board member of several government agencies and organisations, and a member of two government-appointed commissions.

Betty Disero is a Canadian politician, currently the Lord Mayor of Niagara-on-the-Lake, Ontario. She is a former city councillor in Toronto, Ontario, Canada. She was elected to the Toronto City Council in 1985, and served until her resignation in 2003. She moved to Niagara-on-the-Lake in 2009 and was first elected to town council in 2014, becoming Lord Mayor in 2018.

Norman "Norm" Gardner is a politician and administrator in Toronto, Ontario, Canada. He is a former North York and Toronto City Councillor, serving most recently as chair of the Toronto Police Services Board (1998–2003). He is currently chair of the board of the Mackenzie Institute.

Susan Eng, LL.B. is a Toronto lawyer and former chair of the Metro Toronto Police Services Board from 1991 to 1995.

Maureen Prinsloo was a municipal politician in Scarborough, Ontario who served as Chair of the Toronto Police Services Board from 1995-98.

Alok Mukherjee is a Canadian academic, human rights advocate, and public servant. He served as chair of the Toronto Police Services Board (TPSB) from 2005 until his July 2015 retirement. He is currently appointed "distinguished visiting professor" at Ryerson University. On March 24, 2018 Mukherjee, co-authored with Tim Harper, published Excessive Force, a book about the present and future of policing in Canada. On September 8th 2019 he was selected as the NDP candidate for the riding Toronto - St. Paul's in the 2019 Canadian federal election.