The Description de l'Égypte was a series of publications, appearing first in 1809 and continuing until the final volume appeared in 1829, which aimed to comprehensively catalog all known aspects of ancient and modern Egypt as well as its natural history. It is the collaborative work of about 160 civilian scholars and scientists, known popularly as the savants, who accompanied Bonaparte's expedition to Egypt in 1798 to 1801 as part of the French Revolutionary Wars, as well as about 2000 artists and technicians, including 400 engravers, who would later compile it into a full work.

Faqus is a city in the Egyptian governorate of Ash Sharqiyah Governorate. Local attractions include ancient Egyptian monuments in Tell el-Dab'a, Qantir, and Omm Egrim.

Amr Elnady is an Egyptian former professional road cyclist. He most notably won the Tour d'Egypte in 1999 and 2001 and the Tour of Saudi Arabia in 1999. He competed in the Men's Individual time trial at the 2000 Summer Olympics in Sydney where he finished 36th.

The sculptured Dendera zodiac is a widely known Egyptian bas-relief from the ceiling of the pronaos of a chapel dedicated to Osiris in the Hathor temple at Dendera, containing images of Taurus and Libra. This chapel was begun in the late Ptolemaic period; its pronaos was added by the emperor Tiberius. This led Jean-François Champollion to date the relief to the Greco-Roman period, but most of his contemporaries believed it to be of the New Kingdom. The relief, which John H. Rogers characterised as "the only complete map that we have of an ancient sky", has been conjectured to represent the basis on which later astronomy systems were based. It is now on display at the Musée du Louvre, Paris. 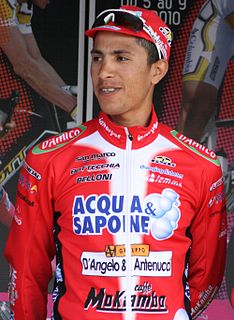 Remigijus Lupeikis is a Lithuanian former track and road racing cyclist. Initially competing for the Soviet Union prior to its breakup, he had a long career riding for Lithuania, which included competing in both road and track events at the 1996 Summer Olympics, and in the road race at the 2000 Summer Olympics.

Waylon Woolcock is a South African professional mountain biker, riding for Team RE:CM Woolcock started cycling as a road rider at the age of 15 and turned professional at the age of 19. In 2007, he won his first major cycling tour, Tour d'Egypte. In 2008 he finished second in the South African National Road Race Championship. In 2011 to 2013, Woolcock took to mountain biking and in those years he won the JoBerg2c mountain bike stage race once and 2nd twice including nine stage wins in total. Woolcock's latest achievements are the MTN Crater Cruise Ultra Marathon and Cape Pioneer Trek stage race.

Vadim Vladimirovich Kravchenko is a Kazakh former cyclist. He competed in the 1996 and 2000 Summer Olympics in the individual pursuit.

Sergey Lavrenenko is a Kazakh former cyclist. A bronze medalist in the world points race championship in 1995, he also represented Kazakhstan in this competition at the 1996 and 2000 Summer Olympics. Also active on the road, he won the Tour of Turkey in 2000.

Svetoslav Tchanliev Kirilov is a Bulgarian former road cyclist. He most notably won the 2005 Tour of Turkey. He has one daughter, named Stella Svetoslav Chanlieva, born in 2001.