Trio was launched at New Brunswick in 1801 and sailed to England. She became a merchant ship trading between Dublin and Montreal. From 1805 new owners sought to employ her as a slave ship, but the French Navy captured her in January 1806 early in her first slave trading voyage.

Captain James Hassler sailed from Liverpool on 21 September 1805, bound for West Africa. Lloyd's List reported on 8 April 1806 that a French squadron consisting of an 84-gun ship-of-the-line and three frigates had captured Trio, Lord Nelson, and the sloop-of-war HMS Favourite off the coast of Africa. [4]

L'Hermite's squadron captured Trio in January off Sierra Leone. The French made a cartel of her and she arrived at Falmouth on 7 April 1806 with the crew of Favourite, which the French had captured on 6 January. [5] She then sailed on to Plymouth. The entry for Trio in Lloyd's Register has the notation "captured" above her name. [2]

Francis P. Spilsbury was the surgeon aboard Favorite and he kept a log of her voyage to Africa.

The French captured Trio on 22 January at Cape Mount. The French swept into the bay where they found Trio and three American vessels. Trio fired a gun and then struck. The French sold the female slaves Trio had gathered to the Americans and divided the male slaves among the French vessels. [6] The French made a cartel of Trio, and on 24 January, after looting almost all the possessions of Favorite's crew, put her crew on board Trio. [6] The French also put on board the crews of Trio, Robert, of Liverpool, Hero, of Glasgow, Flora, of London, and Belle, of Greenock. L'Hermite provided sufficient provisions for 150 men for five days. On the 25th some of the men from the merchantmen became mutinous. Captain John Davie, of Favourite, read the Articles of War and gave the ringleaders 36 lashes each; this ended the mutiny. Trio had 160 men aboard and reached Freetown, Sierra Leone, on 2 February. [7] Trio reached Crookhaven on 29 March where she took on provisions. However, Trio's mate and surgeon deserted. Trio reached Falmouth on 8 April. [8]

Under the rules governing cartels, Trio would probably have sailed on to France, carrying French prisoners in exchange for the British prisoners she had brought. Although the Registers continue to list Trio until 1810, the data is stale, unchanging from 1806. 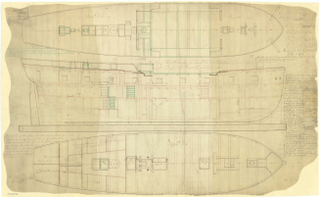 Francis and Eliza was a brig built in 1782 upon the River Thames, England. An American privateer captured her in 1815 while she was transporting convicts from Ireland to Port Jackson, New South Wales, and then released her.

John Bull was a sailing ship built in 1799 at Liverpool for the slave trade. She made one voyage carrying slaves from West Africa to Jamaica. Thereafter she became a West Indiaman, trading with Jamaica. Early in this period she was a letter of marque, and captured a French merchant vessel. A little later John Bull detained an American vessel. Much later she transported female convicts to New South Wales from Cork. After she delivered her convicts she made an unsuccessful voyage as a whaler in the South Pacific. She was last listed in 1833.

Rolla was a French brig launched in 1801 or 1803, that came into British hands in 1804. She became a privateer and then a slaver, but before she took any slaves the French Navy captured her. The British Royal Navy recaptured her and took her into service as HMS Rolla. She served in Sir Home Riggs Popham's attack on Buenos Aires. She returned to Britain in December 1807 and was laid up. The Admiralty sold her in 1810 and she became a merchant vessel. She is last listed in 1826, and may have been lost on the coast of Brazil in 1825.

Otway was a French or Spanish vessel built in 1799 that became a Liverpool-based slaver in 1800. She made four voyages delivering slaves from West Africa to the West Indies before the French Navy captured her in 1806. She became the Guadeloupe-based privateer Alerte and captured a number of British merchantmen before the Royal Navy captured her i October 1807.

Plover was launched at Liverpool in 1788. Her whereabouts between 1798 and 1802 are currently obscure. She became a Liverpool-based slaver in 1802 and made three voyages delivering slaves from West Africa to the West indies before the French Navy captured her in 1806 as she was starting her fourth slaving voyage. The French Navy may have commissioned her as a corvette, but if so her service was brief.

Crescent was launched at Rotherhithe in 1790. She initially traded with the Levant, particularly Smyrna. After the outbreak of war with France she may have tried her hand as a privateer. In 1796–1798 she made a voyage to the East Indies, almost surely on behalf of the British East India Company (EIC). A French privateer captured her but the British Royal Navy quickly recaptured her. In 1802-1804 she made one voyage as a slave ship carrying slaves from West Africa to Jamaica. In 1805 she became a whaler. She was lost in 1807 off Patagonia while homeward bound from her first whaling voyage.

Tiger was launched at Liverpool in 1800 as a West Indiaman. She made one voyage in 1806-1807 as a slave ship. She then returned to the West Indies trade. She also captured three American merchant vessels in 1813. She wrecked on 30 September 1819 with loss of life.

Lord Nelson made five voyages carrying slaves from West Africa to the West Indies. A French naval squadron captured her off Sierra Leone on her sixth voyage, before she had embarked any slaves.

Elizabeth was launched at Bermuda in 1786 or 1790. She first appeared in Lloyd's Register (LR) in 1802. She then made four voyages as a slave ship, during the second of which a French privateer captured her. Next, she spent a little over a year as a hired armed tender under contract to the British Royal Navy. She returned to mercantile service trading with Madeira or Africa, until another French privateer captured her in early 1810.

Windsor Castle was launched at Yarmouth in 1804. She spent her entire 11-year career as a Falmouth packet, primarily on the Falmouth–Halifax–New York–Halifax–Falmouth route and the Falmouth–Leeward Islands–Falmouth route. She also sailed on some other voyages. She was involved in two notable single-ship actions. In the first, in 1807, she captured her attacker, a French privateer schooner in a sanguinary encounter. In the second, in 1815, an American privateer captured her. A prize crew took her into Norfolk, Virginia, where she was sold at auction.

Horatio was launched in 1800 at Liverpool. She made four voyages as a slave ship, during two of which she was captured and recaptured. Shortly before the British slave trade ended she left the slave trade and sailed between Britain and South America and as a West Indiaman. She was wrecked in 1817.

Falmouth was launched in 1806 at Liverpool as a slave ship. After the British slave trade ended in 1807, she became a West Indiaman until a privateer captured her in 1812.

Alexander was launched in France or Spain in 1797, probably under another name, and taken in prize circa 1799, when she was lengthened and raised. She was registered at Liverpool in 1801 and proceeded to make six voyages as a slave ship. She then sailed to Brazil and the West Indies and was last listed in 1809.

Tartar was launched in France in 1802, or Spain in 1805, almost certainly under another name. In 1806 she sailed under the flag of the United Kingdom on a voyage as a slave ship from Liverpool. On her return she started trading between Liverpool and Brazil and Africa. A French frigate captured her in 1813, but then released her. She was wrecked early in 1815.

Resource was launched at Bermuda in 1792, possibly under another name, and sailed from Liverpool from 1798 on. She made four voyages as a slave ship. She was captured in 1805 at the very beginning of her fifth voyage.

Recovery was launched in 1781, possibly under another name. She first appeared in British sources in 1781. She made two voyages as a Bristol-based slave ship, with the first of these giving rise to a landmark court case. She then became a West Indiaman until the French Navy captured her in 1797.

Vigilant was built in Britain, but the date and place of her launching are obscure. Vigilant first appeared in Lloyd's Register (LR) in 1802, having undergone a repair in that year, which suggests that she may have been launched some years earlier under another name. She made one complete voyage as a whaler to the British Southern Whale Fishery, and was captured in the Pacific on her second whaling voyage.

Harmony was launched in 1798 in Lancaster as a West Indiaman. Between 1805 and 1807 she sailed to the Pacific on a privateering voyage. Early in the voyage she was engaged in a single ship action in which her target repelled the attack, killing Harmony's master and inflicting severe casualties on her crew. Although Harmony returned to trading with the West Indies, in 1817 she made one voyage to India under a licence from the British East India Company. On her return she traded between Hull and Petersburg, and Quebec. New owners in 1821 decided to use her as a whaler in the northern whale fishery. She was lost there on her first whaling voyage.