A surveyor's tripod is a device used to support any one of a number of surveying instruments, such as theodolites, total stations, levels or transits.

The modern sturdy, but portable, tripod stand with three leg pairs hinged to a triangular metal head was invented and first manufactured for sale by Sir Francis Ronalds in the late 1820s in Croydon. He sold 140 of the stands in the decade 1830-40 and his design was soon imitated by others. [1]

Older surveying tripods had slightly different features compared to modern ones. For example, on some older tripods, the instrument had its own footplate and did not need to move laterally relative to the tripod head. For this reason, the head of the tripod was not a flat footplate but was simply a large diameter fitting. Threads on the outside of the head engaged threads on the instrument's footplate. No other mounting screw was used.

Fixed length legs were also seen on older instruments. Instrument height was adjusted by changing the angle of the legs. Widely spaced tripod feet resulted in a lower instrument while closely spaced legs raised the instrument. This was considerably less convenient than having variable length legs.

Materials for older tripods were predominantly wood and brass, with some steel for high wear items like the feet or foot points.

The tripod is placed in the location where it is needed. The surveyor will press down on the legs' platforms to securely anchor the legs in soil or to force the feet to a low position on uneven, pock-marked pavement. Leg lengths are adjusted to bring the tripod head to a convenient height and make it roughly level.

Positioning the tripod and instrument precisely over an indicated mark on the ground or benchmark requires intricate techniques.

Many modern tripods are constructed of aluminum, though wood is still used for legs. The feet are either aluminum tipped with a steel point or steel. The mounting screw is often brass or brass and plastic. The mounting screw is hollow and has two lateral holes to attach a plumb bob to center the instrument e.g. over a corner or other mark on the ground. After the instrument is centered within a few cm over the mark, the plumb bob is removed and a viewer (using a prism) in the instrument is used to exactly center it.

The top is typically threaded with a 5/8" x 11 tpi screw thread. The mounting screw is held to the underside of the tripod head by a movable arm. This permits the screw to be moved anywhere within the head's opening. The legs are attached to the head with adjustable screws that are usually kept tight enough to allow the legs to be moved with a bit of resistance. The legs are two part, with the lower part capable of telescoping to adjust the length of the leg to suit the terrain. Aluminum or steel slip joints with a tightening screw are at the bottom of the upper leg to hold the bottom part in place and fix the length. A shoulder strap is often affixed to the tripod to allow for ease of carrying the equipment over areas to be surveyed. 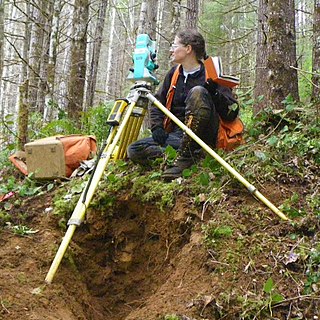 Surveying or land surveying is the technique, profession, art, and science of determining the terrestrial two-dimensional or three-dimensional positions of points and the distances and angles between them. A land surveying professional is called a land surveyor. These points are usually on the surface of the Earth, and they are often used to establish maps and boundaries for ownership, locations, such as the designed positions of structural components for construction or the surface location of subsurface features, or other purposes required by government or civil law, such as property sales. 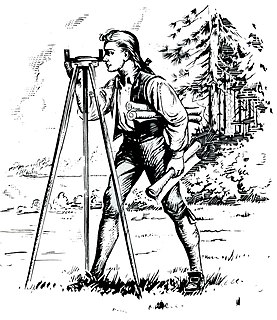 A tripod is a portable three-legged frame or stand, used as a platform for supporting the weight and maintaining the stability of some other object. The three-legged design provides good stability against gravitational loads as well as horizontal shear forces, and better leverage for resisting tipping over due to lateral forces can be achieved by spreading the legs away from the vertical centre. 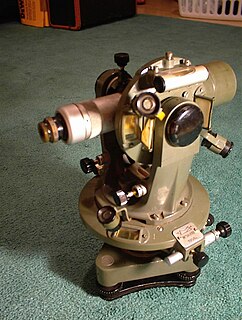 A theodolite is a precision optical instrument for measuring angles between designated visible points in the horizontal and vertical planes. The traditional use has been for land surveying, but it is also used extensively for building and infrastructure construction, and some specialized applications such as meteorology and rocket launching. 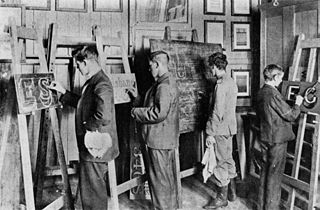 An easel is an upright support used for displaying and/or fixing something resting upon it, at an angle of about 20° to the vertical. In particular, easels are traditionally used by painters to support a painting while they work on it, normally standing up, and are also sometimes used to display finished paintings. Artists' easels are still typically made of wood, in functional designs that have changed little for centuries, or even millennia, though new materials and designs are available. Easels are typically made from wood, aluminum or steel.

A compass, more accurately known as a pair of compasses, is a technical drawing instrument that can be used for inscribing circles or arcs. As dividers, it can also be used as a tool to step out distances, in particular, on maps. Compasses can be used for mathematics, drafting, navigation and other purposes. 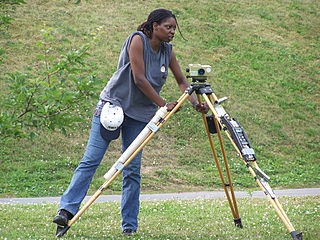 Levelling or leveling is a branch of surveying, the object of which is to establish or verify or measure the height of specified points relative to a datum. It is widely used in geodesy and cartography to measure geodetic height, and in construction to measure height differences of construction artifacts. It is also known as spirit levelling and differential levelling. 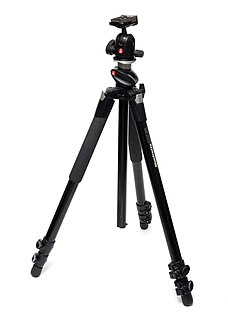 In photography, a tripod is a portable device used to support, stabilize and elevate a camera, a flash unit, or other videographic or observational/measuring equipment. All photographic tripods have three legs and a mounting head to couple with a camera. The mounting head usually includes a thumbscrew that mates to a female-threaded receptacle on the camera, as well as a mechanism to be able to rotate and tilt the camera when it is mounted on the tripod. Tripod legs are usually made to telescope, in order to save space when not in use. Tripods are usually made from aluminum, carbon fiber, steel, wood or plastic.

A tribrach is an attachment plate used to attach a surveying instrument, for example a theodolite, total station, GNSS antenna or target to a tripod. A tribrach allows the survey instrument to be repeatedly placed in the same position over a surveying marker point with sub-millimetre precision, by loosening and re-tightening a lock to adjust the instrument base in a horizontal plane. 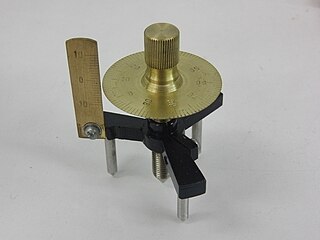 A spherometer is an instrument used for the precise measurement of the radius of curvature of a sphere or a curved surface. Originally, these instruments were primarily used by opticians to measure the curvature of the surface of a lens. 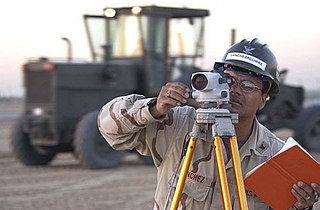 A level is an optical instrument used to establish or verify points in the same horizontal plane in a process known as levelling, and is used in conjunction with a levelling staff to establish the relative heights levels of objects or marks. It is widely used in surveying and construction to measure height differences and to transfer, measure, and set heights of known objects or marks.

A spoke nipple holds a bicycle wheel's rim to each spoke.

A microphone stand is a free-standing mount for a microphone. It allows the microphone to be positioned in the studio, on stage or on location without requiring a person to hold it.

Drum hardware refers to the parts of a drum or drum kit that are used to tension, position, and otherwise support the instruments themselves. 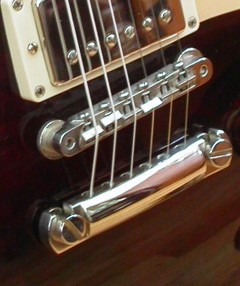 A stoptail bridge used on a solid body electric guitar or archtop guitar is a specialized kind of fixed hard-tail bridge. Hard-tail bridged guitars use different bridges from those guitars fitted with vibrato systems. 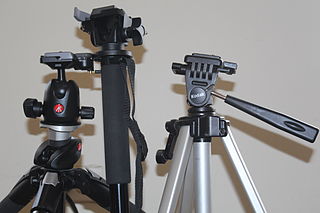 A tripod head is the part of a tripod system that attaches the supported device to the tripod legs, and allows the orientation of the device to be manipulated or locked down. Modular or stand-alone tripod heads can be used on a wide range of tripods, allowing the user to choose which type of head best suits their needs. Integrated heads are built directly onto the tripod legs, reducing the cost of the tripod system.

Temporary adjustments are a set of operations which are performed on a theodolite to make it ready for taking observations. These include its initial setting up on a tripod or other stand, centering, levelling up and focusing of eyepiece.

This is a glossary of levelling terms. Levelling is a surveying method used to find relative height, one use of which is to ensure ground is level during construction, for example, when excavating to prepare for laying a foundation for a house.