Trisha Silvers (born 19 April 1981 in Melbourne, Victoria) became known in Australia for surviving the tsunami of 26 December 2004, in which her new husband Troy Broadbridge was killed.

She is active in the Reach Foundation, an Australian organisation that promotes youth self-esteem and is the founder of the Reach Broadbridge Fund which she now manages part-time. [1] In 2005, Silvers wrote Beyond the Wave, which chronicles her life prior to, during and after the tsunami. [1]

She was the 2006 recipient of the Young Australian of the Year Award, for her work in Thailand and with Australian youth. [2]

In 2006, she appeared on the Nine Network's Torvill and Dean's Dancing on Ice and had a brief relationship with Ryan Phelan. [3]

In 2007, she was the official ambassador for Melbourne's Moomba festival. [4]

In May 2016, Trisha Silvers now known as Trisha Squires moved to Hobart, Tasmania with her husband and in June the same year they opened a cafe at Princes St Sandy Bay, called Nutrient Bar which they sold in September 2017. [7] They have 2 daughters Harper born 2015 and Holly born 2016. [8]

In November 2020, Trisha Squires was appointed head of AFL Queensland. [10]

Moomba is held annually in Melbourne, Australia. Run by the City of Melbourne, it is Australia's largest free community festival. The Melburnian tradition is celebrated over four days, incorporating the Labour Day long weekend, from Friday to the second Monday in March. Moomba is culturally important to Melbourne, having been celebrated since 1955, and regularly attracts up to a million people, with a record attendance of 3.8 million set in 2018.

The following lists events that happened during 2004 in Australia.

Troy Broadbridge was an Australian rules footballer with the Melbourne Football Club in the Australian Football League (AFL).

The following lists events that happened during 2006 in Australia.

The following lists events that happened during 1944 in Australia.

Ross Graham Oakley is an Australian businessman and former Australian rules footballer with St Kilda in the Victorian Football League (VFL). He is CEO of the Victorian Rugby Union and was appointed CEO of the new the Melbourne Rebels rugby union franchise in September 2010. 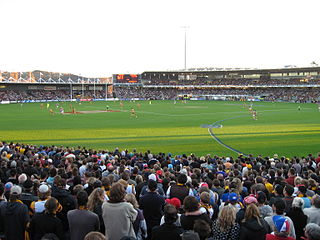 Australian rules football in Tasmania known as "football" officially and locally, has a history dating back to the 1860s.

Colin Garland is a former professional Australian rules footballer who played for the Melbourne Football Club in the Australian Football League (AFL).

The Tasmanian AFL bid refers to several Australian rules football teams that have proposed to eventually join the Australian Football League (AFL) and the AFL Women's (AFLW). Proposals have been made on several occasions since the expansion of the Victorian Football League into an Australia-wide competition started in 1987.

Katie Brennan is an Australian rules footballer with and captain of the Richmond Football Club in the AFL Women's (AFLW). She previously played for and captained the Western Bulldogs from 2017 to 2019. Brennan was signed as a marquee player by the Bulldogs ahead of the inaugural AFL Women's season in 2017, and was their leading goalkicker in 2019. 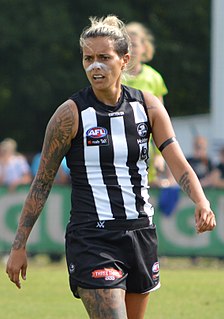 Moana Hope is a former professional Australian rules footballer who played in the AFL Women's competition from 2017 to 2019, including 13 matches over two seasons at Collingwood and a further seven matches over one season at North Melbourne. Each followed an extended career at state-league level before the creation of a national league. 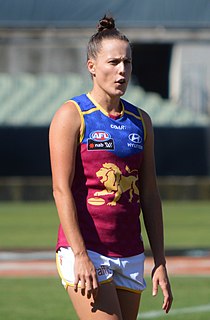 Emma Zielke is a retired Australian rules footballer who played for the Brisbane Lions in the AFL Women's competition. She was the club's inaugural AFLW team captain, leading the club in 2017–2018 and 2020–2021.

Angela Foley is an Australian rules footballer playing for the Adelaide Football Club in the AFL Women's (AFLW). A defender, 1.73 metres (5.7 ft) tall, Foley plays primarily on the half-back line with the ability to push into the midfield. After spending her early life in country Victoria, in which she won a premiership and best and fairest with Bendigo Thunder, she moved to Darwin in 2013. Her career in the Northern Territory saw her win three consecutive premierships, two consecutive league best and fairests, a grand final best on ground medal, and interstate representation.

Courtney Anne Webb is a cricketer and Australian rules footballer from Launceston, Tasmania. A right-handed batter and right-arm medium-pace bowler, Webb currently plays for South Australia in the Women's National Cricket League (WNCL) and for the Melbourne Renegades in the Women's Big Bash League (WBBL).

Ellie Gavalas is an Australian rules footballer playing for the North Melbourne Football Club in the AFL Women's (AFLW). Gavalas was drafted by North Melbourne with their first selection and tenth overall in the 2019 AFL Women's draft. She made her debut against Melbourne at Casey Fields in the opening round of the 2020 season. It was revealed she signed on with the club for two more seasons on 17 June 2021, tying her to the club until the end of 2023.