Rogers was born in Melbourne. His early acting roles were on Australian television and he completed short stints in soap operas Bellbird , Number 96 (in 1974) and The Box (in 1975). He was a regular in the police drama series The Link Men (1970) which lasted for 13 episodes, and had guest roles in programs including Barrier Reef , Division 4 and the 1976 miniseries Power Without Glory . He also appeared in a few British films in the early 1970s, notably Four Dimensions of Greta (1972), The Flesh and Blood Show (1972) and Sex Farm (1973).

He originally appeared on General Hospital from December 1980 until February 1992. The popularity and longevity of the character Robert Scorpio in General Hospital came as a result of his involvement with the monumentally popular "supercouple" Luke and Laura, whose 1981 wedding brought in 30 million viewers and remains the highest-rated hour in American soap opera history. [1] [2]

While Rogers' Scorpio had been "killed with no body found" when he left the series in 1992, Rogers returned briefly in 1995 as Scorpio's spirit to comfort the character's daughter Robin Scorpio (Kimberly McCullough), who is dealing with the loss of her boyfriend to an AIDS-related illness and is herself HIV-positive. [3] He returned again in January 2006 for six weeks, this time with Scorpio being very much alive. Rogers reappeared in April 2006 and left again that November.

From 5 August 2008 through 21 October 2008, Rogers reprised the role of Robert Scorpio on the second season of SOAPnet's General Hospital: Night Shift , a prime time spin-off of General Hospital which stars Scorpio's daughter Robin. [4] [5] He was featured in 12 of the season's 14 episodes, and Soap Opera Digest named the appearance their "Best Return" of 2008. [6] Rogers later reappeared on General Hospital for four episodes starting 22 December 2008 as Scorpio attends Robin's wedding. [7] [8]

Rogers returned to General Hospital as Robert Scorpio on 29 February 2012 after Anna Devane (Finola Hughes) called him back to Port Charles to tell him that their daughter Robin Scorpio-Drake had been killed in a lab accident. After seven episodes, he left again on 8 March 2012. Rogers expressed disappointment. He later returned to the series on 15 November 2012 but later departed on 18 December 2012 as his character was drugged into a coma. Rogers reprised the role on 4 October 2013 as part of his on-screen daughter's return. However, on 14 November 2013 it was announced that he would be departing the series to return to The Young and the Restless as Colin Atkinson. He made his last appearance on 30 January 2014.

Rogers returned to the series as Robert Scorpio on 17 December 2015 but he was also portraying Colin on Y&R at the same time. He later left the series on 2 February 2016, although he briefly returned from 26 August to 9 September in the same year.

Rogers returned to General Hospital in April 2018 for a story arc in which he aids Anna Devane who is trying to locate her long lost son Henrik Faison. Henrik is the unknown child that she bore in secret with the late Cesar Faison. [9] After leaving the show on 1 June 2018, he later returned yet again from 27 July to 12 September in the same year for another story arc where Anna and Finn go missing. In 2019, he returned to the show again on 25 January and has remained on the show since then on a recurring basis.

The Young and the Restless

Rogers returned to daytime television on 8 December 2010 when he joined the cast of The Young and the Restless as Colin Atkinson. [10] He was placed on contract with the show in February 2011. However, Rogers' character was written out of the series in October 2011. He returned to the role briefly in 2012. [11]

Rogers starred in the CINE award-winning short Opportunity Knocks, portraying Death himself. Co-produced by Aaron Wells and Suzanne Niedland, there are plans to develop the short into a feature-length film. [ clarification needed ]

In 1994 Rogers guest-starred in season one, episode "The War Prayer", of the science fiction TV series Babylon 5 . He has done voice-over work representing restaurant chain Outback Steakhouse, [12] Foster's Lager, Reebok, Epson and others.

He voiced Jake the kangaroo mouse in The Rescuers Down Under , and gave his voice to the 2015 video game, Mad Max . [13]

From 1997 to 1998, Rogers played bar owner Harry in Fast Track, a series about stock car racing which was filmed in Canada. [14]

Since 2010, Rogers has starred on the soap opera web series The Bay as Lex Martin. [15]

In 2019 he played Doc in the Amazon series, Studio City. In 2020 that role garnered him an Emmy for Outstanding Performance by a Supporting Actor in a Digital Drama Series at the 47th Annual Daytime Emmy Awards. [16]

The Young and the Restless is an American television soap opera created by William J. Bell and Lee Phillip Bell for CBS. The show is set in a fictionalized version of Genoa City, Wisconsin. First broadcast on March 26, 1973, The Young and the Restless was originally broadcast as half-hour episodes, five times a week. The show expanded to one-hour episodes on February 4, 1980. In 2006, the series began airing previous episodes weeknights on SOAPnet until 2013, when it moved to TVGN. As of July 1, 2013, Pop still airs previous episodes on weeknights. The series is also syndicated internationally. 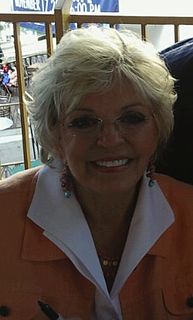 Susan Seaforth Hayes is an American dramatic actress. She is best known for her portrayal of Julie Williams on the NBC drama Days of Our Lives, and her intermittent portrayal of Joanna Manning on the CBS daytime drama The Young and the Restless. She began playing the role of Julie Olsen Williams on Days of Our Lives in 1968, and is the only actor to appear on the show for all seven decades in which it has been on the air. Seaforth Hayes still regularly appears on Days as Julie. Finola Hughes is an English actress, television host, entrepreneur, author, and dancer, best known for role as Anna Devane on the ABC soap operas General Hospital and All My Children, and her portrayal of Laura in the 1983 film Staying Alive, the sequel to Saturday Night Fever. 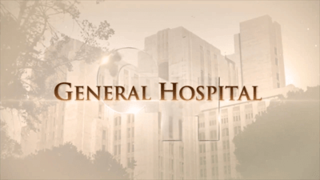 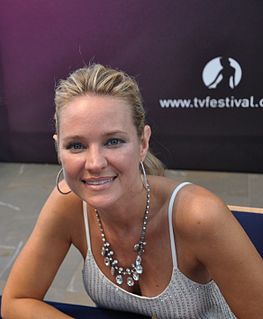 Sharon Case is an American actress and former model. At the age of 17, Case began working as a model, relocating briefly to Japan, before pursuing an acting career. She is best known for her roles on daytime television soap operas, scoring parts in the serials General Hospital and As the World Turns during the early stages of her career. In 1994, she stepped into the role of Sharon Newman on the CBS daytime soap opera The Young and the Restless, which she still plays. Case, who is considered a leading actress in the series, won the 1999 Daytime Emmy Award for Outstanding Supporting Actress in a Drama Series for her performance.

Steve Burton is an American actor, best known for his portrayal of Jason Morgan on General Hospital from 1991 to 2012 and 2017 to 2021, and Dylan McAvoy on The Young and the Restless from 2013 to 2017. He also voiced the character Cloud Strife in a wide range of Square Enix products, including Final Fantasy VII: Advent Children and the Kingdom Hearts series. In 2017, Burton returned to General Hospital in the role of Jason Morgan, under the alias of "Patient 6." In 2019, he also briefly stepped into the role of Jason's twin brother, Drew Cain in various flashbacks that Shiloh Archer had.

Kimberly Anne McCullough is an American actress and television director. She is best known for her role as Robin Scorpio on the soap opera General Hospital, a role which she originated at the age of 7, playing the character on and off from 1985 to 2001 with a stint in 2004. McCullough later returned to the show in 2005 as a doctor and departed in 2012. She has made sporadic guest appearances since July 2012. However, in August 2013, McCullough signed a contract to return to the series full-time.

Andrea Lynn Evans is an American actress and producer. She is most recognized for her portrayal of Tina Lord on the ABC soap opera One Life to Live, a role she played from 1978–81 and 1985–90, returning in 2008 and 2011. Evans also appeared on the soap operas The Young and the Restless, The Bold and the Beautiful and Passions.

Michelle Stafford is an American actress, screenwriter and producer. She currently plays Phyllis Summers on the CBS daytime soap opera The Young and the Restless, for which she has won two Daytime Emmy Awards. In 2013, Stafford created and starred in her own comedy web series, The Stafford Project. She also played Nina Reeves on the ABC daytime soap opera General Hospital.

Gloria Monty was an American television producer working primarily in the field of daytime drama.

Jason Craig Thompson is a Canadian born- English actor. He joined the cast of the American daytime drama General Hospital in December 2005 as neurosurgeon Dr. Patrick Drake. In 2007, Thompson became an original cast member of the General Hospital prime-time spin-off General Hospital: Night Shift while maintaining his day job on GH. On April 1, 2015, Thompson also portrayed original GH character Steve Hardy in a flashback for the show's 52nd anniversary. He has portrayed Billy Abbott on the CBS soap opera The Young and the Restless since 2016. 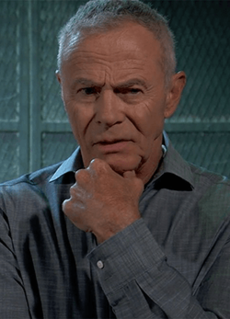 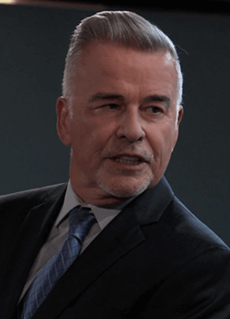 Duke Lavery is a fictional character from General Hospital, an American soap opera on the ABC network, primarily portrayed by Ian Buchanan. The role was created by executive producer Gloria Monty and co-head writer Norma Monty. Duke is introduced as the mysterious owner of a local night club who falls in love with police chief Anna Devane. Unbeknownst to the rest of Port Charles, Duke is laundering money for the mob but when his criminal ties cost him Anna, he teams with her ex-husband Robert Scorpio to bring down the mob. Duke and Anna's romance becomes quite popular among fans achieving supercouple status and rivaling Anna's romance with Robert. In 1987, Duke's feud with the Jerome crime family leads to Anna miscarrying their unborn child. Duke and Anna's story comes to a tragic end in 1989 when Duke is presumed dead. The producers would recast the role with Greg Beecroft as Jonathan Paget who was revealed to be Duke with plastic surgery only for the character to be killed off in 1990 – dying in Anna's arms due fan disapproval.

Robin Scorpio is a fictional character from the ABC Daytime soap opera General Hospital and its primetime SOAPnet spin-off General Hospital: Night Shift, originated and portrayed by Kimberly McCullough on and off for over 30 years since 1985. The character came to mainstream attention during a 1990s story arc where her boyfriend Stone Cates dies from AIDS and Robin is diagnosed as HIV-positive. Robin is also famous in the soap community for having been one of the few long-term soap characters to age in real time, not SORASed like most other child actors. 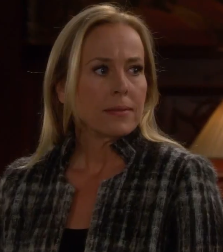 Genevieve Atkinson is a fictional character from the American CBS soap opera The Young and the Restless. Created by former head writer Maria Arena Bell as the mother of Cane Ashby, the role was portrayed by Genie Francis, who is widely known for her three-decade long portrayal of Laura Spencer on the ABC soap opera General Hospital. Francis was excited to join The Young and the Restless, expressing disappointment in her former daytime role and saying that her fan base would "follow whatever she does." She made her first appearance during the episode airing on May 27, 2011.