A web series is a series of scripted or non-scripted online videos, generally in episodic form, released on the Internet and part of the web television medium, which first emerged in the late 1990s and became more prominent in the early 2000s. A single instance of a web series program can be called an episode or "webisode", however the latter term is not often used. In general, web series can be watched on a range of platforms and devices, including desktop, laptop, tablets and smartphones. They can also be watched on television.

As of 2016, there are a number of awards that have been established to award excellence in web series production, including the Streamys, Webbys, IAWTV, and Indie Series Awards; there are also several web series festivals, most notably in Los Angeles and Vancouver. Most major award ceremonies have also created web series and digital media award categories, including the Emmy Awards and the Canadian Screen Awards.

The Spot , or thespot.com, was the first episodic online story, and the first website to integrate photos, videos and what later became known as blogs into the story line. Created by Scott Zakarin in 1995, The Spot was likened to "Melrose Place-on-the-Web" and featured a rotating cast of attractive actors playing trendy and hip twenty somethings who rented rooms in a fabled southern California beach house called “The Spot”, in Santa Monica, California. [2] The site earned the title of Infoseek's “Cool Site of the Year,” an award which later became the Webby. [3] [4] In that same year, Bullseye Art was one of the first web publishers to create animated webisodes. The first few webisodic content to come out of Bullseye Art included Porkchops, Internet the Animated Series and Rat Chicken. In 1998 Bullseye Art had a hit with Miss Muffy and the Muf Mob, which led to a development deal with MTV. Bullseye Art also created Space Dog which gained popularity on Atom Films. The original Bullseye Art content can be seen currently on the Magic Butter web network. 1998 was also the first year of the Stella Shorts, perhaps the first comedic live action web series, first seen on Heavy.com and Comedynet.com.

In 2003 Microsoft launched MSN Video, which featured the original web series Weird TV 2000 (from the creators of the syndicated television series, Weird TV ). Weird TV 2000 featured dozens of shorts, comedy sketches and mini-documentaries produced exclusively for MSN Video. From 2003 to 2006, several independent web series began to achieve popularity, most notably Red vs. Blue (created by Rooster Teeth). The series was distributed independently using online portals YouTube and Revver, as well as the Rooster Teeth website, and acquired over 100 million views during its run. Sam Has 7 Friends , which ran in the summer and fall of 2006, was nominated for a Daytime Emmy Award, and was temporarily removed from the Internet when it was acquired by Michael Eisner. [8]

In 2008, Bravo launched its first weekly web series called The Malan Show. It was about a New York City fashion designer named Malan Breton who was trying to become a successful independent designer. [9] [10] [11] In 2009, the first web series festival was established, called the Los Angeles Web Series Festival. [12]

The rise in the popularity of the Internet and improvements the accessibility and affordability of high speed broadband and streaming video technology meant that producing and distributing a web series became a feasible alternative to "traditional" series production, which was formerly mostly done for broadcast and cable TV. In comparison with traditional TV series production, web series are less expensive to produce. This has allowed a wider range of creators to develop web series. As well, since web series are made available online, instead of being aired at a single preset time to specific regions, they enable producers to reach a potentially global audience who can access the shows 24 hours a day and seven days a week, at the time of their choosing. Moreover, in the 2010s, the rising affordability of tablets and smartphones and the rising ownership rates of these devices in industrialized nations means that web series are available to a wider range of potential viewers, including commuters, travellers and other people who are on the go.

The emerging potential for success in web video has caught the eye of some of the top entertainment executives in America, including former Disney executive and current head of the Tornante Company, Michael Eisner. Eisner's Vuguru subdivision of Tornante partnered with Canadian media conglomerate Rogers Media on October 26, 2009, securing plans to produce over 30 new web shows a year. Rogers Media will help fund and distribute Vuguru's upcoming productions, solidifying a connection between traditional media and new media such as web series. [13] Web series can be distributed directly from the producers' websites, through streaming services or via online video sharing websites . [14]

A number of web series incorporate interactive Web 2.0 features on their producer's websites, the show website, or other online fora. These Web 2.0 features enable viewers and fans to post comments online about episodes and link or "tag" favorite shows, episodes or video clips. These activities help to build viewer and fan engagement. Some producers use social media and social networking websites for the promotion of their web series and seek new viewers. As well, some producers monitor social media and networking comments as a way to obtain fan feedback on their shows.

The Webby Awards, established in 1995, and the Indie Series Awards, established in 2009, recognize top web series in the comedy, drama, and reality TV categories. In 2009, the International Academy of Web Television was founded with the mission to organize and support the community of web television creators, actors, producers and executives. [15] It administered the selection of winners for the Streamy Awards, (which awards web television and web series content,) in 2009 and 2010. Due to poor reception and execution from the 2010 Streamy Awards, the IAWTV decided to halt its production of the award ceremony. [16] The IAWTV followed this decision by forming their own award presentation, the IAWTV Awards.

Video clips are short clips of video or movie, usually part of a longer recording. The term is also more loosely used to mean any short video less than the length of a traditional television program.

Eric Eisner is the founder and CEO of Double E Pictures, and partner at The Tornante Company. He is the son of Disney magnate Michael Eisner and a producer. 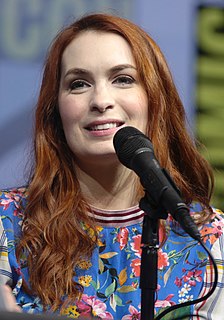 Kathryn Felicia Day is an American actress, writer, and web series creator. She is the creator, star, writer, and producer of the original web series The Guild (2007–2013), a show loosely based on her life as a gamer. She also wrote and starred in the Dragon Age web series Dragon Age: Redemption (2011). Day was a member of the board of directors of the International Academy of Web Television beginning December 2009 until the end of July 2012.

Web television is original episodic online video content produced for broadcast on the Internet via the World Wide Web. The phrase "web television" is also sometimes used to refer to Internet television in general, which includes Internet-transmission of programs produced for both online and traditional terrestrial, cable, or satellite broadcast.

Vuguru is an American independent multi-platform studio founded by Michael Eisner's The Tornante Company in March 2006. The company has produced content including the web series Prom Queen, The Booth at the End, Little Women Big Cars, The All-for-Nots, and Back on Topps. The company has signed content deals with AOL, HDNet, Yahoo!, Hulu, YouTube, Stan Lee's POW! Entertainment, and FremantleMedia. Its shows are distributed in over forty countries, on the Internet, mobile phones, and linear television platforms.

Dinosaur Diorama, also known as DioramaTV, is a production company that focuses primarily on the creation of serialized online video. Their major releases include the first scripted sitcom-length web series, The Burg, the Michael Eisner-produced The All-for-nots, Greg & Donny, and All's Faire. The company consists of Thom Woodley, Matt Yeager and Johnny North, and was founded by Woodley and Kathleen Grace.

The YouTube Streamy Awards, also known as the Streamy Awards or Streamys, are presented annually by Dick Clark Productions and Tubefilter to recognize and honor excellence in online video, including directing, acting, producing, and writing. The formal ceremony at which the awards are presented takes place in Los Angeles, California. They were the first envelope-opening live-streamed award show. 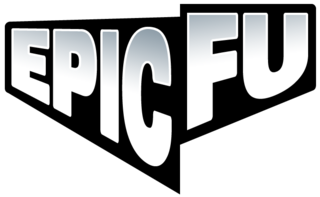 Epic Fu is a web series created by new media producers Steve Woolf and Zadi Diaz. The show premiered on June 1, 2006 with Diaz as the host.

The International Academy of Web Television (IAWTV) was founded in 2008 and is devoted to the advancement of the arts and sciences of web television production.

Tubefilter, Inc. is a privately held company based in Los Angeles, California that operates media businesses focusing on the online entertainment industry. Tubefilter is best known for Tubefilter News, a blog targeted at the fans, creators, producers, "influencers" and distributors of web television content.

The 2nd Annual Streamy Awards, presented by the International Academy of Web Television, were held on Sunday, April 11, 2010, at the Orpheum Theatre in Los Angeles, California. Paul Scheer served as the host of the presentation. Over 1,500 audience members were in attendance. The show was broadcast live by multiple distributors including TV.com and Ustream.tv.

Fine Brothers Entertainment is an American media company, founded by brothers Benny Fine and Rafi Fine, creators and media entrepreneurs. FBE produce the React video series, their several timed-spoiler series, narrative web series, and created a "transmedia" sitcom on YouTube, MyMusic. FBE has been creating content since 2004, and has many large digital channels on YouTube, Facebook, Snapchat and Instagram's IGTV, has sold multiple television shows, and released their first feature film in 2017. 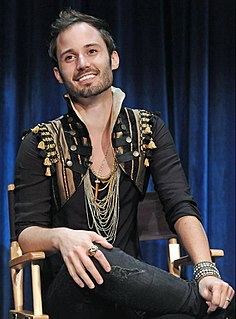 Bradley C. "Brad" Bell is an American television producer and screenwriter, actor, musician, and comic book author. He is best known as co-creator and showrunner of the acclaimed web series Husbands, in which he also stars. He has also released three electronic EPs, and penned the comic book series Husbands: The Comic, based on his web series.

Zadi Diaz is the Executive Producer of YouTube Nation. She is a producer and director, known for founding the web series Epic Fu and co-hosting the podcast New Mediacracy. She has won a number of Webby and Streamy Awards.

Scott Zakarin is an American film producer. He is the creator of the Web series platform when he introduced the first internet episodic website The Spot.

The IAWTV Awards is an annual event hosted by the International Academy of Web Television, currently based in Los Angeles, that honors web series creators and talent in over a dozen categories, voted on by the IAWTV membership.