Microblogging(Tumblelogs) is an online broadcast medium that exists as a specific form of blogging. A micro-blog differs from a traditional blog in that its content is typically smaller in both actual and aggregated file size. Micro-blogs "allow users to exchange small elements of content such as short sentences, individual images, or video links", [1] which may be the major reason for their popularity. [2] These small messages are sometimes called microposts. [1] [3]

As with traditional blogging, micro-bloggers post about topics ranging from the simple, such as "what I'm doing right now," to the thematic, such as "sports cars." Commercial micro-blogs also exist to promote websites, services and products, and to promote collaboration within an organization.

Some micro-blogging services offer features such as privacy settings, which allow users to control who can read their micro-blogs, or alternative ways of publishing entries besides the web-based interface. These may include text messaging, instant messaging, E-mail, digital audio or digital video.

The first micro-blogs were known as tumblelogs. The term was coined by why the lucky stiff in a blog post on April 12, 2005, while describing Leah Neukirchen's Anarchaia. [4]

However, by 2006 and 2007, the term microblog was used more widely for services provided by established sites like Tumblr and Twitter.

As of May 2007, there were 111 micro-blogging sites in various countries.[ citation needed ] Among the most notable services are Twitter, Tumblr, FriendFeed, Plurk, Jaiku and identi.ca. Different versions of services and software with micro-blogging features have been developed. Plurk has a timeline view that integrates video and picture sharing. Flipter uses micro-blogging as a platform for people to post topics and gather audience's opinions. PingGadget is a location-based micro-blogging service. Pownce, developed by Digg founder Kevin Rose among others, integrated micro-blogging with file sharing and event invitations. [6] Pownce was merged into SixApart in December 2008. [7]

Internet users in China are facing a different situation. Foreign micro-blogging services like Twitter, Facebook, Plurk, and Google+ are censored in China. The users use Chinese weibo services such as Sina Weibo and Tencent Weibo. Tailored to Chinese people, these weibos are like hybrids of Twitter and Facebook. They implement basic features of Twitter and allow users to comment to others' posts, as well as post with graphical emoticons, attach an image, music and video files.[ citation needed ] A survey by the Data Center of China Internet from 2010 showed that Chinese micro-blog users most often pursued content created by friends, experts in a specific field or related to celebrities.

Several studies, most notably by the Harvard Business School and by Sysomos, have tried to analyze user behavior on micro-blogging services. [8] [9] Several of these studies show that for services such as Twitter a small group of active users contributes to most of the activity. [10] Sysomos' Inside Twitter [9] survey, based on more than 11 million users, shows that 10% of Twitter users account for 86% of all activity.

Twitter, Facebook, and other micro-blogging services have become platforms for marketing and public relations, [11] with a sharp growth in the number of social-media marketers. The Sysomos study shows that this specific group of marketers on Twitter is much more active than the general user population, with 15% of marketers following over 2,000 people and only 0.29% of the Twitter public following more than 2,000 people. [9]

Micro-blogging has also become an important source of real-time news updates during socio-political revolutions and crisis situations, such as the 2008 Mumbai terror attacks or the 2009 Iran protests. [12] [13] The short nature of updates allow users to post news items quickly, reaching an audience in seconds. Clay Shirky argues that these services have the potential to result in an information cascade, prompting fence-sitters to turn activist. [14]

Micro-blogging has noticeably revolutionized the way information is consumed.[ citation needed ] It has empowered citizens themselves to act as sensors or sources of information that could lead to consequences and influence, or even cause, media coverage. People share what they observe in their surroundings, information about events, and their opinions about topics from a wide range of fields. Moreover, these services store various metadata from these posts, such as location and time. Aggregated analysis of this data includes different dimensions like space, time, theme, sentiment, network structure etc., and gives researchers an opportunity to understand social perceptions of people in the context of certain events of interest. [15] [16] Micro-blogging also promotes authorship. On the micro-blogging platform Tumblr, the reblogging feature links the post back to the original creator.

The findings of a study by Emily Pronin of Princeton University and Harvard University's Daniel Wegner may explain the rapid growth of micro-blogging. The study suggests a link between short bursts of activity and feelings of elation, power and creativity. [17]

While the general appeal and influence of micro-blogging seem[ original research? ] to be growing continuously, mobile micro-blogging is moving at a slower pace. Among the most popular activities carried out by mobile internet users on their devices in 2012, mobile blogging or tweeting was last on the list, with only 27% of users engaging in it. [18] [ failed verification ]

Micro-blogging is not without issues, such as privacy, security, and integration. [19]

Privacy is arguably a major issue because users may broadcast sensitive personal information to anyone who views their public feed. Micro-blog platform providers can also cause privacy issues through altering or presetting users' privacy options in a way users feel compromises their personal information. An example would be Google’s Buzz platform which incited controversy in 2010 by automatically publicizing users’ email contacts as ‘followers’. [20] Google later amended these settings.

On centralized services, where all of the Micro-blog's information flows through one point (e.g. servers operated by Twitter), privacy has been a concern in that user information has sometimes been exposed to governments and courts without the prior consent of the user who generated such supposedly private information, usually through subpoenas or court orders. Examples can be found in Wikileaks related Twitter subpoenas, [21] [22] [23] [24] as well as various other cases. [25] [26] [27] [28]

Security concerns have been voiced within the business world, since there is potential for sensitive work information to be publicized on micro-blogging sites such as Twitter. [29] [30] This includes information which may be subject to a superinjunction. [31]

Integration could be the hardest issue to overcome, since it can be argued that corporate culture must change to accommodate micro-blogging.[ citation needed ]

Live blogging is a derivative of micro-blogging that generates a continuous feed on a specific web page.

Instant messaging and IRC display status, but generally only one of a few choices, such as: available, off-line, away, busy. Away messages (messages displayed when the user is away) form a kind of micro-blogging.

In the Finger protocol, the .project and .plan files are sometimes used for status updates similar to micro-blogging. [32]

Past micro-blogging services, no longer active.

Jaiku was a social networking, micro-blogging and lifestreaming service comparable to Twitter, founded a month before the latter. Jaiku was founded in February 2006 by Jyri Engeström and Petteri Koponen from Finland and launched in July of that year. It was purchased by Google on October 9, 2007.

Pownce was a free social networking and micro-blogging site started by Internet entrepreneurs Kevin Rose, Leah Culver, and Daniel Burka. Pownce was centered on sharing messages, files, events, and links with friends. The site launched on June 27, 2007, and was opened to the public on January 22, 2008. On December 1, 2008, Pownce announced that it had been acquired by blogging company Six Apart, and that the service would soon shut down. It was subsequently shut down on December 15, 2008.

Google Friend Connect was a free social networking site from 2008 to 2012. Similar in practice to Facebook Platform and MySpaceID, it took a decentralised approach, allowing users to build a profile to share and update information via third-party sites. These sites acted as a host for profile sharing and social exchanges.

identi.ca is a free and open-source social networking and micro-blogging service based on the pump.io software, using the Activity Streams protocol. Identi.ca stopped accepting new registrations in 2013, but continues to operate alongside several other pump.io-based hosts provided by E14N which continue to accept new registrations.

Ping.fm was an advertising-supported social networking and micro-blogging web service that enabled users to post to multiple social networks simultaneously. 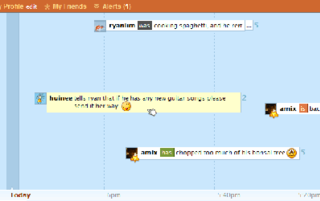 Plurk is a free social networking and micro-blogging service that allows users to send updates through short messages or links, which can be up to 360 text characters in length. 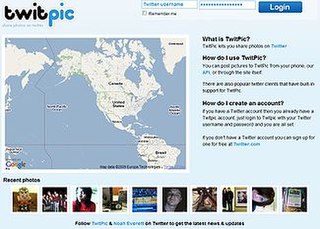 TwitPic was a website and app that allowed users to post pictures to the Twitter microblogging service, which at the time of TwitPic's creation could not be posted to twitter directly. TwitPic was often used by citizen journalists to upload and distribute pictures in near real-time as an event was taking place.

TweetDeck is a social media dashboard application for management of Twitter accounts. Originally an independent app, TweetDeck was subsequently acquired by Twitter Inc. and integrated into Twitter's interface.

MSN China was a joint venture of the global software corporation Microsoft, part of its MSN service, located in the People's Republic of China. Unlike most other international versions of the MSN portal, which have used the same layout as the United States since 2014, MSN China utilized a unique design and had a separate editorial division.

Sina Weibo (新浪微博) is a Chinese microblogging (weibo) website. Launched by Sina Corporation on August 14, 2009, it is one of the biggest social media platforms in China, with over 445 million monthly active users as of Q3 2018. The platform has been a huge financial success, with surging stocks, lucrative advertising sales and high revenue and total earnings per quarter. At the start of 2018, it surpassed the US$30 billion market valuation mark for the first time.

Tencent Weibo is a Chinese microblogging (weibo) website launched by Tencent in April 2010, and is still currently under beta testing. Users may broadcast a message including 140 Chinese characters at most through the web, SMS or smartphone.

Reblogging is the mechanism in blogging which allows users to repost the content of another user's post with an indication that the source of the post is another user.

Weibo is a type of mini-blogging service used in China, including social chat sites and platform sharing.

Social login is a form of single sign-on using existing information from a social networking service such as Facebook, Twitter or Google+, to sign into a third party website instead of creating a new login account specifically for that website. It is designed to simplify logins for end users as well as provide more and more reliable demographic information to web developers.

Mastodon is a free and open-source self-hosted social networking service. It allows anyone to host their own server node in the network, and its various separately operated user bases are federated across many different servers. These servers are connected as a federated social network, allowing users from different servers to interact with each other seamlessly. Mastodon is a part of the wider Fediverse, allowing its users to also interact with users on different open platforms that support the same protocol, such as PeerTube and Friendica.

micro.blog is a microblogging and social networking service created by Manton Reece. On its surface, Micro.blog looks a lot like Twitter or Instagram, but provides for posting status updates, articles, photos, short podcasts, and video.