Tristan Tondino was born in Montreal, Quebec, Canada, in 1961. [2] He is the son of painter Gentile Tondino is married to Joséane Brunelle, and is the cousin of Richard Monette. Tondino has also worked as a charge scenic artist, art director and screenwriter. [3]

Gentile (Gerry) Tondino was a Canadian educator and artist, who lived in Montreal, Quebec. He was a member of the Royal Canadian Academy of Arts. Gentile Tondino is the father of theater designer Guido Tondino, multimedia artist Tristan Tondino, and architect Lisa Tondino.

Richard Jean Monette OC, DHum, LLD, was a Canadian actor and director, best known for his 14-season tenure as the longest-serving artistic director of the Stratford Festival of Canada from 1994 to 2007.

A charge artist leads and oversees the painting of stage, film or television scenery. In the United States such individuals are typically members of the United Scenic Artists union.

Tondino, has used the term irrealism to describe his work as a visual artist. [4]

Irrealism is a term that has been used by various writers in the fields of philosophy, literature, and art to denote specific modes of unreality and/or the problems in concretely defining reality. While in philosophy the term specifically refers to a position put forward by the American philosopher Nelson Goodman, in literature and art it refers to a variety of writers and movements. If the term has nonetheless retained a certain consistency in its use across these fields and would-be movements, it perhaps reflects the word’s position in general English usage: though the standard dictionary definition of irreal gives it the same meaning as unreal, irreal is very rarely used in comparison with unreal. Thus, it has generally been used to describe something which, while unreal, is so in a very specific or unusual fashion, usually one emphasizing not just the "not real," but some form of estrangement from our generally accepted sense of reality.

One of Tondino's canvasses, consisting entirely of text, questions why entire societies ignore certain realities: "On any given day, according to the Food and Agriculture Organization of the United Nations, approximately 35,600 children die of starvation. This tragedy does not make the six o’clock news. Approximately 13 million children die of starvation every year, never making it to OUR reality." (...) "When we are told to deal with reality, we are essentially being told to accept an ideology." [4]

On February 2, 2002, Tondino created a painting representing a Canadian 5-dollar bill (featuring the kingfisher) with the serial number ANR2312049 that he titled Where Is It?. The painting included the statement "I spent this 5 Dollar Bill on Feb 02 2002." Tondino then began to hang posters offering a $1000 reward to the person who found the bill. [3] [6] [ better source needed ] The story was picked up by The Montreal Gazette's Bill Brownstein, The Suburban's Bernie Mendelman, The Hour, CBC radio and Raymond Saint-Pierre of Radio Canada. [6] [3]

A second painting was created representing another 5-dollar bill (featuring children at play), entitled Where Is It II. This was donated to The Trevor C. Williams Kids Foundation[ citation needed ] [6] and was sold at Empire Auction to an unknown buyer. [6]

In 2008, Tondino was invited by designer Yves Jean Lacasse to prepare painted clothing for Manneken-Pis on the occasion of the 400 anniversary of Quebec [7]

Tondino has had numerous solo exhibitions and taken part in many group shows, including ones at Nelligan: Le Vaisseau d’or Maison de la culture Mercier, Montreal, Quebec, Canada (2014 [8] , and Dada [9]

Tondino co-authored and co-directed two short films which premiered at the Montreal World Film Festival in 2012 and 2013. One of the films titled Crainte et tremblement is about World War 1. [10] Crainte et tremblement was available on Radio Canada's website ici.tou.tv from 2012 until 2015. The second film is called Cell From Hell.[ citation needed ]

Tondino was the art director for Someone is Watching. He has worked on many film and theatre productions, including Le Confessional, Jesus de Montreal, The Whole Nine Yards, and Where the Money Is.[ citation needed ]

The Société de télédiffusion du Québec, branded as Télé-Québec, is a Canadian French language public educational television network in the province of Quebec. It is a provincial Crown corporation owned by the Government of Quebec. The network's main studios and general offices are located in Montreal, at the corner of Saint Catherine and Fullum Streets in Downtown Montreal.

Schwartz's, also known as the Montreal Hebrew Delicatessen, is a delicatessen restaurant and take-out, located at 3895 Saint-Laurent Boulevard in Montreal, Quebec. It was established in December 31, 1928 by Reuben Schwartz, a Jewish immigrant from Romania. It is kosher style rather than kosher. Its long popularity has led to it being considered a cultural institution of Montreal.

Maison Radio-Canada is a skyscraper in Montreal, Quebec, Canada, constructed in 1973 as broadcast headquarters and master control for all French-language radio and television services of the Canadian Broadcasting Corporation. It is also the main studio for Montreal's local English-language CBC services and the headquarters of Radio Canada International, the CBC's digital international broadcasting service. 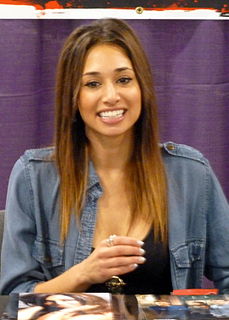 Meaghan Rath is a Canadian film and television actress. She is known for her television roles on Being Human, 15/Love, The Assistants, and Hawaii Five-0.

Michèle Cournoyer is a Canadian animator who on 1 March 2017 received a Governor General’s Award in Visual and Media Arts for her body of work.

Michael John Ward is a French-Canadian comedian. He performs comedy in both French and English.

Richard Burnett is a Canadian writer, editor, journalist and columnist. His column and blog, "Three Dollar Bill", deals with gay life and culture across Canada and around the world. Burnett was also editor-at-large of Montreal's alternative newsweekly Hour for 15 years until the newspaper published its last issue on April 7, 2011. Burnett wrote his POP TART blog for the Montreal Gazette from 2011 to 2016, as well as his weekly Seven Days, Seven Nights arts column from 2014 to 2016. Burnett is a frequent contributor to the Montreal Gazette and other media outlets, is a pop culture pundit on Montreal's top-rated CJAD 800 AM Radio and is an arts and culture blogger for Tourisme Montréal. Burnett has also been a regular writer and columnist for both Xtra! and Fugues since 1998.

Kevin Tierney, was a Canadian film producer from Montreal who co-wrote and produced the most popular Canadian film of all time at the domestic box office, Bon Cop, Bad Cop, for which he earned a 'Golden Reel' the Genie Award for Best Motion Picture in 2007. He is a former vice-chair of the Academy of Canadian Cinema & Television and former chair of the board of Cinémathèque québécoise.

Denys Desjardins, is a film director, screenwriter, cinematographer, editor and film historian for more than twenty years. After completing studies in literature, film and communications, he directed several acclaimed films.

Fairmount Bagel is a Montreal-style bagel bakery in Montreal, Quebec, Canada in the Mile End neighbourhood of the Plateau-Mont-Royal borough. The first location opened on September 7, 1919 on Saint-Laurent Boulevard by Isadore Shlafman. The current location, on 74 Fairmount Avenue West was opened in 1949. Fairmount Bagel still remains a family-run business.

Elisabetta Fantone is a Canadian actress, who played in the movie big eyes, painter, model and author. Elisabetta is best known for her acting and painting career. Elisabetta got much attention with her appearance on Quebec's 2006 docu-reality television series Loft Story. She has also appeared in many short films and feature films and wrote a French autobiography entitled Journal Intime d'une lofteuse. Her first single Feel was featured on MC Mario’s Mixdown 2007 compilation. She was also the spokesmodel for various clothing campaigns. Elisabetta's art work has gained much recognition and can be found in galleries across Canada and the U.S.

3 Seasons is a 2009 Canadian psychological drama, directed and written by Jim Donovan. The film was produced on a minimalist budget with support of the Canada Council for the Arts and Comedians. The story follows the lives of two couples experiencing an unexpected life change, as well as a middle-aged father seeking revenge for his life's misfortune. Leader Post summaries this film as " a gritty, multi-layered drama about the intersecting lives of two Montreal couples and a grieving middle-aged father visiting from Alberta. With pregnancy and parenthood as the unifying themes, the movie covers a period of nine months, evoking both the three seasons of the title and the length of a normal pregnancy". The three stories transect and reflect each other, displaying the same themes within similar but different situations. With a small audience range of 700 spectators in theatres, the film succeeded winning many rewards and achievements.

The St-Ambroise Montreal Fringe Festival is a festival that hosts fringe theatre, repertory, dance, music, and drag-queen performances in Montreal, Quebec, Canada. The festival is held annually and lasts for 20 days in June. The festival was previously run by Jeremy Hechtman and Patrick Goddard, but Hechtman stepped down in 2010 after being in the position for 15 years. The festival has been run since 2011 by choreographer Amy Blackmore. McAuslan Brewing sponsors the St-Ambroise Montreal Fringe Festival and several other festivals in Montreal, including Pop Montreal, the Montreal World Film Festival, and the Fantasia Festival. The 2007 festival featured a mass fake marriage for theatre-goers at the beginning of the festival and then a corresponding mass fake divorce at the end symbolised by the eating of timbits.

Scott Faulconbridge is a Canadian comedian, writer, and actor. He is known in North America and abroad for his stand-up routines. He is a regular on CBC radio's The Debaters with Steve Patterson and has worked extensively in stand-up, television, and film. He has been on Just For Laughs, appeared on NBC's Last Comic Standing, and was nominated for a Canadian Comedy Award in 2009.

Julie Tremble is a French-Canadian artist living in Montreal, Quebec. She has held coordinating positions in a variety of cultural organisations in Quebec and Ontario. Since 2015, she has headed Vidéographe, the Montreal-based artist-run centre focused on moving images.

Alexis Brunelle-Duceppe is a Canadian politician, who was elected to the House of Commons of Canada in the 2019 election. He represents the electoral district of Lac-Saint-Jean as a member of the Bloc Québécois.