Tritiya Paksha (1931) is a Bengali short film directed by Amar Chowdhury. The film was made under Madan Theatres Ltd. banner. [1] [2]

Salil Chowdhury; 19 November 1925 - 5 September 1995) was an Indian songwriter, music director, lyricist, writer, and poet who predominantly composed for Bengali, Hindi, and Malayalam films. He composed music for films in 13 languages. This includes over 75 Hindi films, 41 Bengali films, around 27 Malayalam films, and a few Marathi, Tamil, Telugu, Kannada, Gujarati, Oriya and Assamese films. His musical ability was widely recognised and acknowledged in the Indian film industry. He was an accomplished composer and arranger who was proficient in several musical instruments, including flute, the piano, and the esraj. He was also widely acclaimed and admired for his inspirational and original poetry in Bengali.

Dena Paona is a 1931 Bengali film directed by Premankur Atorthy, starring Amar Mullick, Durgadas Bannerjee, Jahar Ganguly, Nibhanani Devi, and Bhanu Bandopadhyay. Based on a novel by Sarat Chandra Chattopadhyay and produced by New Theatres, it is credited as the one of first Bengali talkies, and along with Alam Ara, was one of the first sound films produced in India. The film explored the ills of the dowry system and touched on the problems of female oppression in 19th century Bengal. 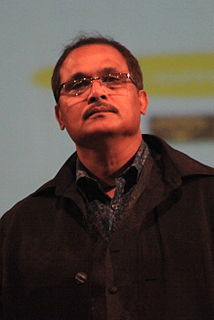 Tapan Chowdhury is a Bangladeshi musician. He is a former member of the musical group Souls and is known for his modern (Adhunik) songs. He won Best Male Singer in 1st Meril-Prothom Alo Awards in 1988.

Amar Choudhury was an Indian film actor, director, editor and writer. He wrote and directed Jamai Shashthi in 1931 produced by Madan Theatre Limited, credited as the first Bengali talkie. He acted in this film too as in all of the films written and directed by him. It was released on 11 April 1931 at Crown Cinema Hall in Calcutta in the same year as Alam Ara, the first Indian talkie was released. 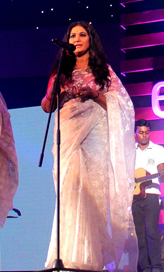 Matri Sneha is a 1923 Bengali film directed by Jyotish Bannerjee. The film was made under the banner of Madan Theatres Pvt. Ltd.

Satya Pathe is a 1935 Bengali film directed by Amar Choudhury.

Kuhelika is a 1952 Bengali film. The film was directed by Ramesh Bose and was made under the banner of Sunshine Productions. Dakshinamohan Thakur scored music of the film.

Amjad Hossain was a Bangladeshi film director, actor, scriptwriter and lyricist. He won the Bangladesh National Film Award for Best Director twice, for the films Golapi Ekhon Traine (1978) and Bhat De (1984). He also won Bangla Academy Literary Award in 2004 and Ekushey Padak in 1992.

Mahmudun Nabi was a Bangladeshi playback singer. He was awarded Bangladesh National Film Award for Best Male Playback Singer for his performance in the film The Rain (1976).

Chittagong-12 is a constituency represented in the Jatiya Sangsad of Bangladesh since 2014 by Shamsul Haque Chowdhury of the Awami League.

Touhid Hossain Chowdhury is a Bangladeshi film editor. He won Bangladesh National Film Award for Best Editing for the film Desha: The Leader (2014)

Chowdhury Mazhar Ali is a Bangladeshi film actor. He is mostly known for his villain role in the Bengali film. In 1998, He started his film career with the film Matrivumi.