Trnovo may refer to the following places:

Topics referred to by the same term
This disambiguation page lists articles about distinct geographical locations with the same name.
If an internal link led you here, you may wish to change the link to point directly to the intended article.

Kijevo is a Serbo-Croatian toponym that may refer to:

Jablanica is a common South Slavic toponym, derived from jablan, "Lombardy poplar", literally meaning "place of lombardy poplar". It may refer to:

Palanka can refer to:

Istočno Sarajevo is de jure capital city of Republika Srpska entity of Bosnia and Herzegovina. It consists of a few suburban areas of pre-war Sarajevo which are now included in the Republika Srpska entity, and newly built areas. With an area of 1450 km2, Istočno Sarajevo is one of the largest administrative areas in the Balkans. As of 2013, it has a population of 61,516 inhabitants. Istočno Sarajevo is the largest city in Republika Srpska in terms of area, while it is in fifth place in terms of population. It is the only city of the entity that includes several municipalities: Istočna Ilidža, Istočno Novo Sarajevo, Pale, Istočni Stari Grad, Sokolac and Trnovo. It is separated from Sarajevo and Canton Sarajevo by the Inter-Entity Boundary Line (IEBL). The City Administration of East Sarajevo is located in the municipality of Istočno Novo Sarajevo, in Stefana Nemanje Street.

Brod may refer to:

Lokve is a village in western Slovenia in the Municipality of Nova Gorica. It is located on the Trnovo Forest Plateau, above the Vipava Valley in the Gorizia region of the Slovene Littoral. It is a popular tourist center, serving as a summer resort for people from the towns of Nova Gorica and Gorizia (Italy). Škol Hill rises north of Lokve.

Trnovo is a village in western Slovenia in the Municipality of Nova Gorica. It is located on the high Trnovo Forest Plateau in the traditional Slovene Littoral region.

Gračanica may refer to:

Brdo may refer to:

Novi Grad may refer to:

Arbanasi may refer to:

Kriva Bara or Kriva bara may refer to:

Telephone numbers in Yugoslavia consisted of a 3-digit area code followed by 6 digits. In Serbia, they mainly began with 1, 2 or 3, in Croatia 4 or 5, in Slovenia 6, Bosnia & Herzegovina 7, in Montenegro 8 and in Macedonia 9. 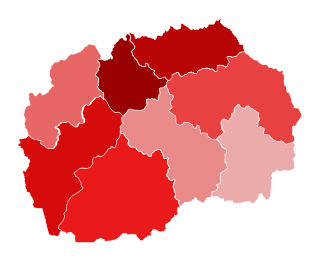 The COVID-19 pandemic in North Macedonia is part of the ongoing worldwide pandemic of coronavirus disease 2019 caused by severe acute respiratory syndrome coronavirus 2. The virus was confirmed to have reached North Macedonia in February 2020. The initial contagion in the country was mainly connected with the COVID-19 pandemic in Italy as there are circa 70,000 residents of Italy from North Macedonia and resulted in many people returning to North Macedonia, bringing the virus with them. As of 9 July, over 7,000 cases have been confirmed in the country, due to its second wave caused by family reunions during Eid al-Fitr among the Muslim minority and the overall re-opening of the country to organize the parliamentary elections.