Trout Brook is a river in Delaware County, New York. It flows into the East Branch Delaware River by Shinhopple. [1] 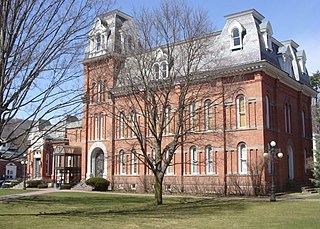 Delaware County is a county located in the US state of New York. As of 2010 the population was 47,980. The county seat is Delhi. The county is named after the Delaware River, which was named in honor of Thomas West, 3rd Baron De La Warr, appointed governor of Virginia in 1609. 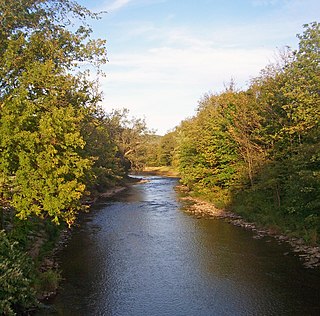 The East Branch Delaware River is one of two branches that form the Delaware River. It is approximately 75 mi (144 km) long, and flows through the U.S. states of New York and Pennsylvania. It winds through a mountainous area on the southwestern edge of Catskill Park in the Catskill Mountains for most of its course, before joining the West Branch along the northeast border of Pennsylvania with New York. For a long stretch it serves as the Blue Line, the park's boundary. Much of it is paralleled by state highway NY 30. 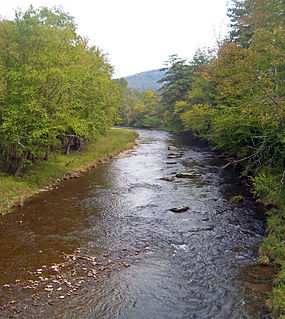 The Beaver Kill, sometimes written as the Beaverkill or Beaverkill River, is a tributary of the East Branch Delaware River, a main tributary of the Delaware River, approximately 44 miles (71 km) long, in the U.S. State of New York. The kill drains a 300-square-mile (780 km2) area of the Catskill Mountains and has long been celebrated as one of the most famous trout streams in the United States. Its preservation helped establish many of the basic conservation principles of rivers in the United States. 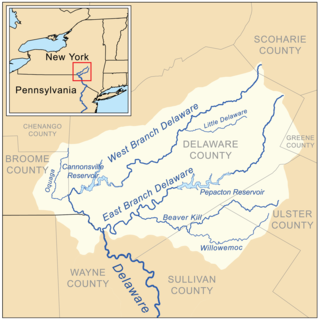 The West Branch Delaware River is one of two branches that form the Delaware River. It is approximately 90 mi (144 km) long, and flows through the U.S. states of New York and Pennsylvania. It winds through a mountainous area of New York in the western Catskill Mountains for most of its course, before joining the East Branch along the northeast border of Pennsylvania with New York. Midway or so it is empounded by the Cannonsville Dam to form the Cannonsville Reservoir, both part of the New York City water supply system for delivering drinking water to the City. 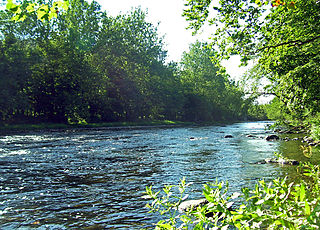 The Neversink River is a 55-mile-long (89 km) tributary of the Delaware River in southeastern New York in the United States. The name of the river comes from the corruption of an Algonquian language phrase meaning "mad river."

Wickecheoke Creek is a 15.0-mile-long (24.1 km) tributary of the Delaware River in Hunterdon County, New Jersey in the United States. 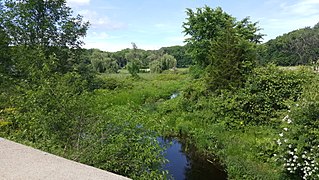 The Pequest River is a 35.7-mile-long (57.5 km) tributary of the Delaware River in the Skylands Region in northwestern New Jersey in the United States.

The Jones River is a 7.5-mile-long (12.1 km) river running through Kingston, Massachusetts. The river drains about 30 square miles (78 km2), has its source in Silver Lake and drains into Kingston Bay. Land surrounding the river is 52% forested, of which 22% has been developed for residential use. There is a USGS stream gauge along 16 square miles (41 km2) of the river and it has measured the flow at 0.7 cubic feet per second (0.020 m3/s) per square mile of drainage area. 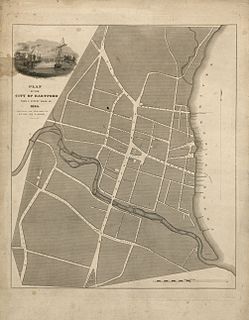 The Park River, sometimes called the Hog River, flows through and under the city of Hartford, Connecticut. Between 1940 and the 1980s, the 2.3-mile (3.7 km) river was buried by the Army Corps of Engineers to prevent the spring floods regularly caused by increased surface runoff from urban development.

The Williams River is a 27.0-mile (43.5 km) river in the U.S. state of Vermont. It is a tributary of the Connecticut River. Its watershed covers 117 square miles; land use is about 80% forested and 4% agricultural, and the upper river supports wild brook trout and brown trout.

Hopkins Pond is a small pond located at the south foot of Ragged Mountain, in the town of Andover, New Hampshire, United States. It lies at an elevation of 644 feet (196 m). The pond is part of Proctor Academy's 2,500-acre (10 km2) campus in Andover and is jointly managed by Proctor and the New Hampshire Fish and Game Department. The pond area is open to the public for non-motorized boat travel, fishing and hiking.

Mahantango Creek is a 2.1-mile-long (3.4 km) tributary of the Susquehanna River in Snyder and Juniata counties, Pennsylvania, in the United States. Its name comes from a Delaware Indian word meaning "where we had plenty to eat". The creek flows along the border between Snyder County and Juniata County.

The Salisbury Plain River is a 4.7-mile-long (7.6 km) river in Plymouth County, Massachusetts that flows from the city of Brockton into the towns of West Bridgewater and East Bridgewater where it joins the Matfield River, a major tributary of the Taunton River.

Trout Brook may refer to:

Steele Brook is a river in Delaware County, New York. It flows into the West Branch Delaware River by Delhi. Steele Brook flows through Delhi Reservoir.

East Brook is a river in Delaware County, New York. It flows into the West Branch Delaware River by Walton, New York.

Trout Brook is a river in Delaware County, New York. It flows into Beaver Kill by Peakville.