Troy High School, also known as Troy Community Complex, was a public high school in Troy, Alabama. It was built in 1917. It was designed by architect Frank Lockwood. The school was replaced by Charles Henderson High School. The building was demolished in 2010. [1] A public library has been built on the site. [3] It was listed on the U.S. National Register of Historic Places in 1984. [2] 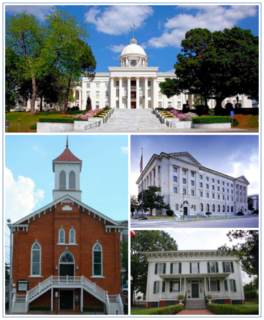 Montgomery is the capital city of the U.S. state of Alabama and the county seat of Montgomery County. Named for Richard Montgomery, it stands beside the Alabama River, on the coastal Plain of the Gulf of Mexico. In the 2010 Census, Montgomery's population was 205,764. According to the US estimated census of 2019, it is the third most populous city in Alabama, after Birmingham and Huntsville, and is the 118th most populous in the United States. The Montgomery Metropolitan Statistical Area's population in 2010 was estimated at 374,536; it is the fourth largest in the state and 136th among United States metropolitan areas. 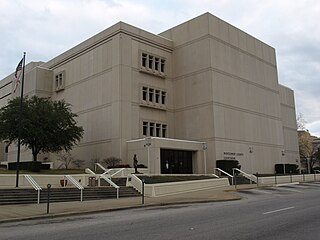 Montgomery County is located in the State of Alabama. As of the 2010 census, its population was 229,363, making it the fourth-most populous county in Alabama. Its county seat is Montgomery, the state capital. 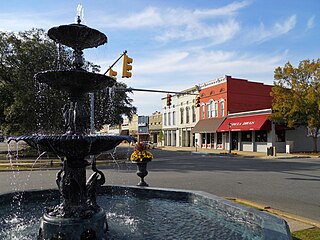 Eufaula is the largest city in Barbour County, Alabama, United States. As of the 2010 census the city's population was 13,137.

Prichard is a city in Mobile County, Alabama, United States.

Livingston is a city in Sumter County, Alabama, United States. By an act of the state legislature, it was incorporated on January 10, 1835. At the 2010 census the population was 3,485, up from 3,297 in 2000. The city is the county seat of Sumter County, and the home of the University of West Alabama. It was named in honor of Edward Livingston, of the Livingston family of New York.

Talladega is the county seat of Talladega County, Alabama, United States. It was incorporated in 1835. At the 2010 census the population was 15,676. Talladega is approximately 50 miles (80 km) east of Birmingham.

West Point is a city in Troup and Harris counties in the U.S. state of Georgia. It is located approximately halfway between Montgomery, Alabama and Atlanta along Interstate 85. As of the 2010 census, it had a population of 3,474, and in 2015 the estimated population was 3,728. Most of the city is in Troup County, which is part of the LaGrange Micropolitan Statistical Area, and hence part of the Atlanta-Athens-Clarke County-Sandy Springs, GA Combined Statistical Area. A sliver in the south is in Harris County, which is part of the Columbus Metropolitan Statistical Area. 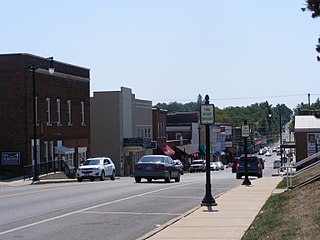 Troy is a city in Lincoln County, Missouri, United States. As of the 2010 census the population was 10,540. It is the county seat of Lincoln County. 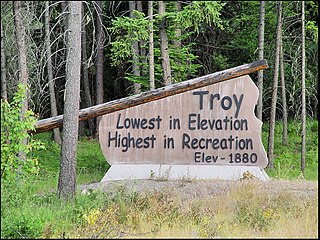 Troy is a city in Lincoln County, Montana, United States. The population was 938 at the 2010 census. It lies at the lowest elevation of any settlement in Montana. The town is on U.S. Route 2, near Montana Highway 56, in the Kootenay River gorge by the Kootenai National Forest. 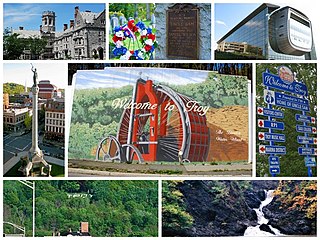 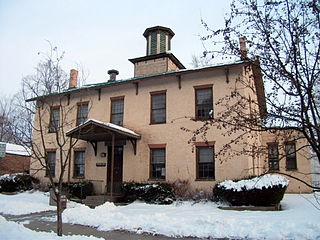 The Troy Public library is the main public library building in the city of Troy, New York, and is located across the street from Russell Sage College in downtown Troy. Currently, the library has one other location, the Lansingburgh branch, which had been temporarily closed in 2009 due to budget concerns. The Sycaway branch was also temporarily closed in January 2009 but has been closed permanently since 2011. The first library began in 1799. The current building was completed in 1897 and is listed on the National Register of Historic Places, both in its own right and as a contributing property to the Central Troy Historic District. 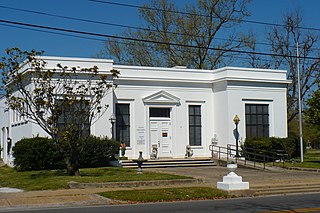 The National African American Archives and Museum, formerly known as the Davis Avenue Branch of Mobile Public Library, is an archive and history museum located in Mobile, Alabama. It serves as a repository for documents, records, photographs, books, African carvings, furniture, and special collections that relate to the African-American experience in the United States. Some of the collection was developed when the building was part of the Mobile Public Library as the Davis Avenue Branch.

George Bigelow Rogers (1870–1945) was an American architect, best known for the wide variety of buildings that he designed in Mobile, Alabama, including mansions in historic European styles and other private residences, churches and public buildings, and the first 11-story skyscraper in Mobile and the Southeast United States. Many of his structures have been listed on the National Register of Historic Places.

Frank Lockwood (1865-1935) was one of Montgomery, Alabama's leading architects.

Troy Public High School, also known as Troy Area Senior High School and Troy High School, is a historic high school building located at Troy, Bradford County, Pennsylvania. It is a 2 1/2-story, roughly "E"-shaped Colonial Revival-style building, measuring 435 feet wide and 165 feet deep. It has red brick exterior walls and the front facade features a central pilastered block of nine bays, with 10 Doric order pilasters. The building is topped by an octagonal cupola. The original building was built in 1923–1924, and enlarged incrementally with wings on each end in 1936 and 1939, and in 1954, with an enlarged gymnasium / library and new auditorium.

The Shepherd Building was a building in Montgomery, Alabama, U.S.. It was built in 1922, and designed by architect Frederick Ausfeld. It was donated to Troy University in 2002. It was listed on the National Register of Historic Places from May 22, 1986 to its demolition in November 2010.