The Troy Softball Complex, built in 2002 on the campus of Troy University, is the home stadium for the Division I (NCAA) Troy Trojans softball team. In 2014, the entire complex underwent a $3 million renovation project. The official seating capacity is 800, with 120 of the seats being chairback seating. The Dodd Center was built in 2014 during the renovation, which houses coaches offices, player lounge, and locker rooms, and indoor batting cages. In the opening game of 2014, Troy hosted Auburn at the newly renovated field, finishing in a 5-5 tie with the Tigers.

The Troy Softball Complex underwent a $3-million renovation project prior to the 2014 season. The project included leveling the softball field to improve site lines, an updated press box that included new offices, a media area with press area, and an expanded concessions area. New officials locker rooms were also added to the facility. The project also featured the addition of the 8,000 square-foot Dodds Center, a state-of-the-art training and housing facility for players and coaches.

Additionally, the playing surface was replaced and ProGrass artificial turf was installed in the outfield and an underground water drainage system was installed. The original basic scoreboard was replaced with a Daktronics Full-Box LED scoreboard with the Troy Athletics logo. The seating areas received an upgrade as well, replacing the original metal erector stand bleachers with a permanent grandstand that features 120 chair-back seats and 680 bench-back seats. Because of this, the original seating capacity expanded from 500 seats to 800 seats. A party deck was also constructed over the visitor's dugout. [1]

The Dodds Center is a state-of-the-art hitting facility that was constructed in the off-season of 2014 as part of the softball complex renovations. The 8,000 square foot facility houses full-size player locker rooms, a player lounge, an athletic training room, coaches' offices, equipment storage rooms, and indoor hitting and pitching areas. It was named in honor of Mike and Cindy Dodds for their devotion to Troy University athletics. [2] 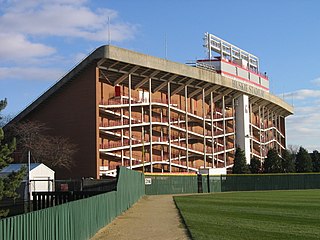 Brigham Field at Huskie Stadium is a college football stadium in the central United States, located on the campus of Northern Illinois University in DeKalb, Illinois. Opened 57 years ago in 1965, it is the home field of the NIU Huskies of the Mid-American Conference (MAC). 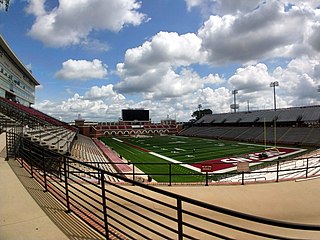 Veterans Memorial Stadium at Larry Blakeney Field is a stadium in Troy, Alabama. It is primarily used for American football, and is the home field of the Troy University Trojans. The seating capacity is 30,470. The stadium was originally built in 1950, and has regularly been expanded, renovated and improved since then. The stadium was named in honor of the college students and local residents who gave their lives during World War II. The field received its name from retired head coach Larry Blakeney, the coach with the most wins in Troy history. 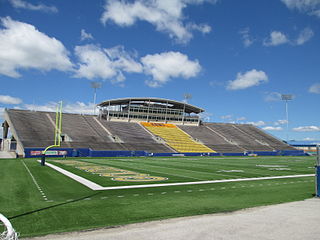 Dix Stadium is a multi-purpose stadium in Kent, Ohio, United States. It is primarily used for American football, and is the home field of the Kent State Golden Flashes football team. In addition, since 2016 the stadium is also home to the Kent State women's soccer team and since 2019 to the women's lacrosse team. Previously, it was home to the Kent State field hockey team from 1997 to 2004 and served as a secondary home for the KSU men's soccer team in the 1970s. It opened on September 13, 1969 and was named in 1973 after Robert C. Dix, former publisher of the Record-Courier and a member of Kent State's Board of Trustees for more than three decades. It was built as an expansion and relocation of Memorial Stadium, with all of Memorial Stadium's main seating areas used at the current stadium in a new configuration. 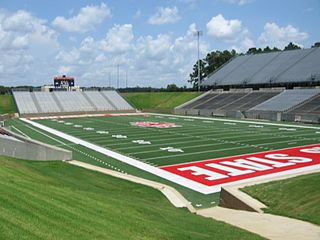 Centennial Bank Stadium is located on the campus of Arkansas State University and is home to their college football team, the Red Wolves. The stadium was named after the old nickname of the school, the Indians, until the 2007 season when it was renamed ASU Stadium. The venue was again renamed in September 2012 after Liberty Bank donated approximately $5 million to the university, and was renamed in 2013 after Liberty Bank was bought by Centennial Bank. The stadium currently has a capacity of 30,406.

Bill Armstrong Stadium is a 6,500-capacity soccer-specific stadium and velodrome located in Bloomington, Indiana. The stadium is home to the Indiana Hoosiers men's and women's soccer teams. It also hosted the NCAA Men's Soccer Championship in 1988, and is home to the annual Little 500 cycling race, which was featured in the 1979 Oscar-winning movie Breaking Away. 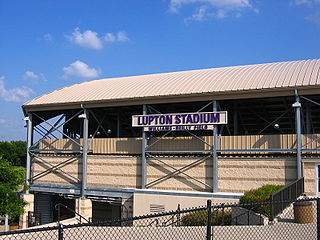 Charlie and Marie Lupton Baseball Stadium and Williams-Reilly Field is a baseball stadium located on the campus of Texas Christian University (TCU) in Fort Worth, Texas. It has been the home field of the TCU Horned Frogs baseball team since its opening on February 2, 2003.

John McDonnell Field is the outdoor track facility at the University of Arkansas in Fayetteville, Arkansas, and is home to the Arkansas Razorbacks. The field is named after former head coach John McDonnell, who ended his thirty-six-year collegiate head coaching career as the most successful coach in NCAA track history, attaining a total of 42 NCAA Championships in three different sports with the Razorbacks. Renovated in 2006, it is one of only ten International Association of Athletics Federations Class 1 certified tracks in the United States.

Vincent–Beck Stadium is a ballpark located in Beaumont, Texas on Jim Gilligan Way on the campus of Lamar University. The stadium was built in 1969 and has a current capacity of 3,500 spectators. It is the home stadium of the Lamar Cardinals baseball team. It was also home to the Beaumont Golden Gators, a minor league Double-A Texas League affiliate of the San Diego Padres (1983–1986) as well as the Beaumont Bullfrogs of the Central Baseball League (1994). The facility is named after former Major League Baseball coach Al Vincent and Bryan Beck, a former member of the Lamar University board of regents.

Riddle–Pace Field is a baseball venue in Troy, Alabama, United States, home to the Troy Trojans baseball team. The grandstand seating capacity is 2,000. The venue features an outfield viewing area for tailgaters, a patio area for fans above the home dugout, and a large black wall with a video board and score board system. The wall has become known as the "Monster".

Olga Mural Field at Schoonover Stadium is a baseball venue located on the campus of Kent State University in Kent, Ohio, United States. It is home to the Kent State Golden Flashes baseball team, a member of the National Collegiate Athletic Association (NCAA) in Division I and the Mid-American Conference East Division. The field opened in 1966 and was previously known as Gene Michael Field from 1990 to 2003. The field was renamed in late 2003 and renovated in 2005 with additional upgrades made from 2006 through 2008 and again in 2013 to 2014. It has a seating capacity of 1,148 people with a Shaw Sports Turf synthetic playing surface. 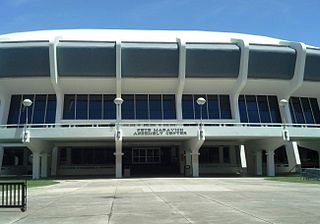 The Tiger Athletic Foundation (TAF) is a private, non-profit corporation dedicated to supporting Louisiana State University (LSU) and its athletics program. It is the primary source of private funding for LSU athletics and contributions to TAF benefit every athlete and every team at LSU. TAF has become a critical element in the success of LSU Athletics by providing private funding for scholarships, academic rewards, new athletic facilities and facility upgrades. In addition to contributions to the athletic scholarship fund, TAF will continue to provide funding for academic programs and facilities that benefit all LSU students.

The Troy Trojans softball team represents Troy University in NCAA Division I college softball. The team participates in the Sun Belt Conference. The Trojans play their home games at Troy Softball Complex located on the university's campus. The program is one of the Top 50 winningest softball programs in the Division I, and has an overall record of 988–660–4(.599) as of the end of the 2021 season.

Manning Field at John L. Guidry Stadium is a 10,500-seat multi-purpose stadium in Thibodaux, Louisiana. It is home to the Nicholls Colonels football team of the Southland Conference in the Football Championship Subdivision (FCS). The stadium is named in honor of former state representative John L. Guidry who was instrumental in the establishment of Francis T. Nicholls Junior College. The playing surface is named Manning Field after the Manning family because the family holds the annual Manning Passing Academy football camp at the facility. The current playing surface is GeoGreen Replicated Grass. The stadium was officially dedicated on September 16, 1972. 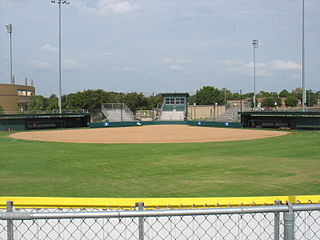 Allan Saxe Field is the home of the UTA Mavericks softball team located in Arlington, Texas. As a result of a complete reconstruction in 2014–15, the stadium currently has a capacity of 622. Prior to the renovation, the softball facility had a seating capacity of 250. Adjacent to Clay Gould Ballpark, the stadium is located at the intersection of W. Park Row Drive and Fielder Road. 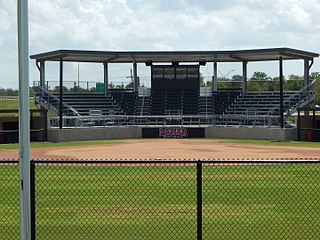 The Lamar Softball Complex, built in 2014–15 on the campus of Lamar University, is the home stadium for the Division I (NCAA) Lamar Lady Cardinals softball team. The stadium is located next to the Lamar Soccer Complex. The initial home game was played in the partially completed stadium with temporary spectator seating on March 6, 2015 against the Houston Baptist Huskies softball team. The current grandstands were built following the 2014–15 season's conclusion. 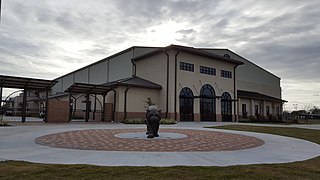 The LSU Tennis Complex is a tennis facility located on the campus of Louisiana State University in Baton Rouge, LA. The facility, built in 2015, serves as the home of the LSU Tigers and LSU Lady Tigers tennis teams. It has a seating capacity of 1,400.