Troy Stetina (born November 16, 1963) is an American guitarist and music educator with more than forty rock and metal instructional methods to his credit, and total sales currently over 1 million units. He was the director of Rock Guitar Studies at the Wisconsin Conservatory of Music and writer for GuitarOne magazine, and now teaches independently. [1]

Stetina grew up in Indiana, the youngest in a family of Olympic cyclists, including his brothers Wayne, Dale and Joel, [2] and won several national medals as a teenager. Stetina's mother, an accomplished opera singer, supported his interest in music, and at age 12 she bought him a $60 beginner guitar and little practice amp. [1]

Following formative stints in Private Wave and Wraith, Stetina started giving private guitar lessons part-time at a local music store and found he had a knack for teaching. When a chance meeting with Hal Leonard author/editor Will Schmid occurred at the store, an opportunity to write a heavy-metal instructional method materialized. His first effort was never published due to copyright issues. His second attempt resulted in the highly successful[ according to whom? ]Heavy Metal Rhythm Guitar (Volumes 1 & 2) in 1986, and Heavy Metal Lead Guitar in 1987.[ citation needed ]

The same year the first book was released, Stetina joined the Wisconsin Conservatory of Music, in Milwaukee. Although he eventually became Director of the Rock Guitar department, he left in the early 1990s to finally pursue a career as a recording artist.[ citation needed ]

Speed Mechanics for Lead Guitar ( ISBN   0-7935-0962-9) is a guitar tutorial book by Stetina first published in 1990. It is designed to teach lead guitar techniques, how to practice and encourage evolving creativity. It is split into three sections Mechanics, Rhythm and Creativity. It Includes a rock version of "Flight of the Bumblebee" by Nikolai Rimsky-Korsakov, "Caprice No. 10" by Niccolò Paganini and "Prelude in D" by JS Bach.

Mortification is an Australian Christian extreme metal band which was formed in 1987 as a heavy metal group, Lightforce, by mainstay Steve Rowe on bass guitar and vocals. By 1990, in the Melbourne suburb of Moorabbin, they were renamed as Mortification with the line-up of Rowe, Michael Carlisle on guitar, and Jayson Sherlock on drums. Mortification has released fourteen studio albums, three compilation albums, three extended plays, six live discs, one demo album, one box set, and several videos on major record labels such as Nuclear Blast. As one of the earliest internationally successful Christian death metal bands from Australia, they served as an inspiration for later similar groups.

Groove metal is a subgenre of heavy metal music that began in the early 1990s. The genre achieved success in the 1990s and continued having some more success in the 2000s. Inspired by thrash metal and traditional heavy metal, groove metal features raspy singing and screaming, down-tuned guitars, heavy guitar riffs, and syncopated rhythms. Unlike thrash metal, groove metal is usually slower and also uses elements of traditional heavy metal. Pantera are often considered the pioneers of groove metal, and groove metal expanded in the 1990s with bands like White Zombie, Machine Head, and Sepultura. The genre continued in the 2000s with bands like Lamb of God, DevilDriver, and Five Finger Death Punch. 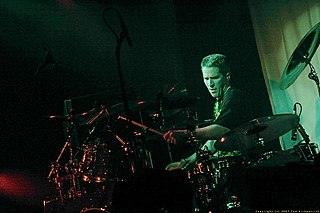 Tourniquet is an American Christian metal band that formed in Los Angeles, California in 1990. The band was founded by Ted Kirkpatrick, Guy Ritter, and Gary Lenaire. The band primarily performs a mixture of thrash, progressive, and neoclassical metal, and is influenced by additional, non-rock forms of music such as classical and world music. It has earned six GMA Dove Award nominations and won multiple recognitions from the readers of HM Magazine, including "Favorite Band of the 1990s" and "Favorite Album of the 1990s" for Pathogenic Ocular Dissonance (1992). It has released ten studio albums, two live albums, four compilation albums, one EP, and several video releases. Tourniquet has sold more than 300,000 albums. In addition to its use of classical music, the band is known for frequently using medical terminology in its album and song titles and lyrics. 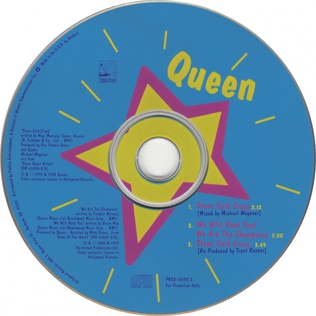 "Stone Cold Crazy" is a song written and performed by British rock band Queen for their 1974 album Sheer Heart Attack. The song is the eighth track on the album. Although the song was not released as a single at the time, it was performed live at almost every Queen concert from 1974 to 1978. "Stone Cold Crazy" is included on the band's 1992 compilation album, Classic Queen. 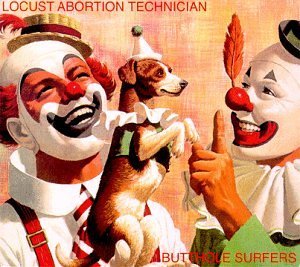 Locust Abortion Technician is the third full-length studio album by American rock band Butthole Surfers, released in March 1987. The album was originally released on both vinyl and CD on Touch and Go, and was remastered on CD on the band's label, Latino Buggerveil, in 1999.

"Roots Bloody Roots" is a song by Brazilian heavy metal band Sepultura, released in February 1996 as the lead single from the band's sixth album Roots. The song is the band's best known and remains a concert staple to this day, usually being performed on encores. A music video was filmed for the single which features the band performing in a catacomb as well as on the streets with a tribe of percussionists. This video can be found on the VHS We Are What We Are, which was later released on DVD as part of Chaos DVD.

Wrecking Everything is a 2002 live album by thrash metal band Overkill which is the counterpart to Wrecking Everything – An Evening in Asbury Park VHS/DVD. Recorded at The Paramount, Asbury Park, New Jersey on March 23, 2002. As of 2006, the album had sold over 5,300 copies and according to Bobby "Blitz" Ellsworth, the VHS/DVD has sold around 15,000–20,000 copies in the U.S.

Ted Kirkpatrick is an American musician and songwriter, best known for his work with the American Christian thrash metal band Tourniquet. Primarily a drummer, Kirkpatrick is the principal songwriter for the band, and has played other instruments as necessary.

A gallop is a beat or rhythm typically used in traditional heavy metal songs. It is created by playing an eighth note followed by two sixteenth notes, usually on rhythm guitar, drums, or bass. 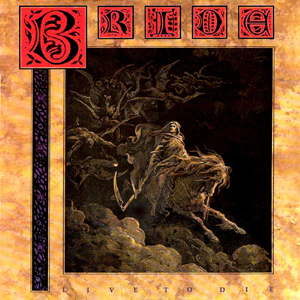 Live to Die is the second album by the American heavy metal band Bride. It is the band's second album to be released on the label Pure Metal Records in 1988. Live to Die is considered by critics to be the band's finest release in its metal era. Songs such as "Hell No" and "Heroes" have become Christian metal anthems and were popular songs in the band's concerts.

"Dissident Aggressor" is a song by the English heavy metal band Judas Priest that was first released on Sin After Sin in 1977. In 2010, thirty-three years after its release, the song won the 2010 Grammy Award for Best Metal Performance after being rereleased as a live track on A Touch of Evil: Live. 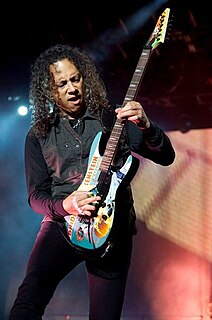 Bangladeshi heavy metal or Bangla heavy metal was originated from the evolution of British and American heavy metal bands of 1980s. Bands like Iron Maiden, Metallica and Megadeth have had the greatest influences on Bangladeshi heavy metal musicians. Other 1970s bands to influence are bands like Deep Purple, Black Sabbath and Motörhead. The first bands to play heavy metal in Bangladesh were bands like Warfaze and Rockstrata. The most prominent era for heavy metal movement was between early 1990s to early 2000s. Warfaze, Rockstrata, Aces and In Dhaka are often considered as the "big four founders of heavy metal". Other 2000s metal bands are bands like Artcell, Aurthohin, Cryptic Fate, Powersurge, Mechanix, Metal Maze, Vibe and Stentorian. Alternative bands like Nemesis, Arbovirus and Black also played some alternative metal songs over the years. Warfaze, Artcell and Aurthohin together are the most popular rock/metal trio of Bangladesh.