Gertrude (Trudi) Marie Guda (born 4 December 1940 in Paramaribo) is a Surinamese poet and anthropologist. She headed the Department of Cultural Affairs of Suriname from 1969 to 1971. [1] She studied in the Netherlands and was inspired by Miguel Barnet's writing a biography of Esteban Montejo. [2] 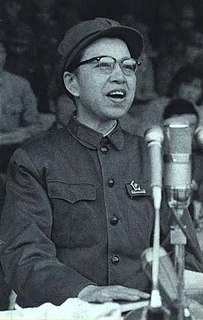 The Gang of Four was a political faction composed of four Chinese Communist Party officials. They came to prominence during the Cultural Revolution (1966–76) and were later charged with a series of treasonous crimes. The gang's leading figure was Jiang Qing. The other members were Zhang Chunqiao, Yao Wenyuan, and Wang Hongwen. 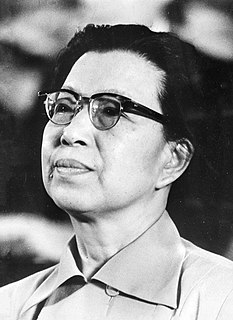 Jiang Qing, also known as Madame Mao, was a Chinese Communist Revolutionary, actress, and major political figure during the Cultural Revolution (1966–76). She was the fourth wife of Mao Zedong, the Chairman of the Communist Party and Paramount leader of China. She used the stage name Lan Ping (藍蘋) during her acting career, and was known by many other names. She married Mao in Yan'an in November 1938 and served as the inaugural "First Lady" of the People's Republic of China. Jiang Qing was best known for playing a major role in the Cultural Revolution and for forming the radical political alliance known as the "Gang of Four". 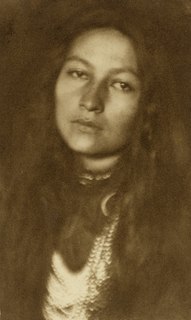 Zitkála-Šá, also known by her missionary-given and later married name Gertrude Simmons Bonnin, was a Yankton Dakota writer, editor, translator, musician, educator, and political activist. She wrote several works chronicling her struggles with cultural identity and the pull between the majority culture she was educated within and her Dakota culture into which she was born and raised. Her later books were among the first works to bring traditional Native American stories to a widespread white English-speaking readership, and she has been noted as one of the most influential Native American activists of the 20th century.

Cultural feminism, the view that there is a "female nature" or "female essence", attempts to revalue and redefine attributes ascribed to femaleness. It is also used to describe theories that commend innate differences between women and men. Cultural feminism diverged from radical feminism, when some radical feminists rejected the previous feminist and patriarchal notion that feminine traits are undesirable and returned to an essentialist view of gender differences in which they regard female traits as superior.

Monika Griefahn is a German politician and activist who was one of the co-founders of Greenpeace. She is a member of the Social Democratic Party (SPD).

Esma Redžepova-Teodosievska was a Macedonian Romani vocalist, songwriter and humanitarian. Because of her prolific repertoire, which included hundreds of songs, and because of her contribution to Roma culture and its promotion, she was nicknamed Queen of the Gypsies. 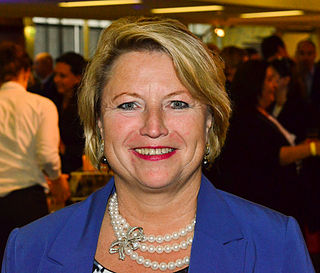 Cornelia Pieper is a German politician of the liberal Free Democratic Party (FDP). She currently serves as German consul general in Gdańsk, Poland.

Kyoko Okazaki is a Japanese manga artist. Okazaki often focuses on urban Japanese life in Tokyo from the 1980s and 1990s. Okazaki's characters are bold and freewheeling, holding unconventional sets of values. Her writings are often studded with modern jargon. Okazaki is one of the early forebears of the gyaru manga style. 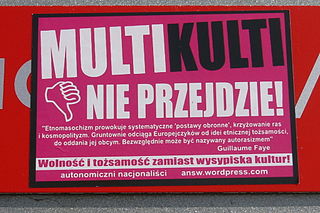 Cultural racism, sometimes called neo-racism, new racism, postmodern racism, or differentialist racism, is a concept that has been applied to prejudices and discrimination based on cultural differences between ethnic or racial groups. This includes the idea that some cultures are superior to others, and that various cultures are fundamentally incompatible and should not co-exist in the same society or state. In this it differs from biological or scientific racism, meaning prejudices and discrimination rooted in perceived biological differences between ethnic or racial groups. 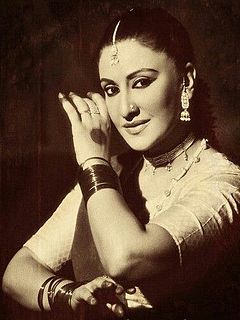 Nighat Chaodhry is born on 24 February, in Lahore, Pakistan and moved to London when she was one year old. She is a trained Sufi & Mystique Kathak classical dancer. She started her journey from London and has been active as a professional Kathak dancer for over three decades. She studied ballet and contemporary dance. She met Nahid Siddiqui at age of fourteen, regarded as one of the greatest Kathak dancers and trained under her guidance. Inspired to learn the classical forms of her own culture, she abandoned ballet and join to understand and absorb the nuances of the style. This required her to be closer to its origins and she moved back to Pakistan.

Cultural Marxism is a far-right antisemitic conspiracy theory which claims Western Marxism as the basis of continuing academic and intellectual efforts to subvert Western culture. The conspiracists claim that an elite of Marxist theorists and Frankfurt School intellectuals are subverting Western society with a culture war that undermines the Christian values of traditionalist conservatism and promotes the cultural liberal values of the 1960s counterculture and multiculturalism, progressive politics and political correctness, misrepresented as identity politics created by critical theory.

Monika Grütters is a German politician of the Christian Democratic Union (CDU) who has been serving as Federal Government Commissioner for Culture and the Media in the government of Chancellor Angela Merkel since 2013. She has been a member of the German Bundestag since 2005 and was chairwoman of the Committee on Culture and Media Affairs from 2009 to 2013. Since December 2016, Grütters has also been the chairwoman of the CDU Berlin and an elected member of the CDU Federal Executive Board.

Claudett de Jesus Ribeiro OMC is a Brazilian geographer and public administrator. In 2011, she was awarded the Ordem do Mérito Cultural.

Simone Barrientos is a German politician. Born in Eisleben, Saxony-Anhalt, she represents The Left. Simone Barrientos has served as a member of the Bundestag from the state of Bavaria since 2017.

Martina Renner is a German politician. She represents The Left. Martina Renner has served as a member of the Bundestag from the state of Thuringia since 2013. 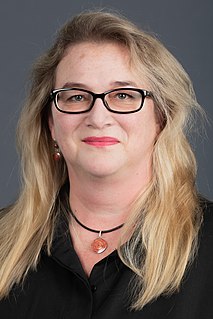 Katrin Budde is a German politician of the Social Democratic Party (SPD) who has been serving as a member of the Bundestag from the state of Saxony-Anhalt since 2017.