True Market Value is a term commonly used for a Real Estate e-auctions or online auction, as it creates transparency for the buyers and ensure that the seller maximises the price of the property to the true market value. The transparency creates a fair deal for all parties and is auditable if any twists around the deal should arise.

The concept is still not widely spread in the real-estate business, as it has only really been used from 2010 and onwards. From 2010 to 2014 there are some Lead User companies who have used this for their corporate real estate divestments. One example is A.P. Moller Maersk Group, who successfully have done this in North America, Latin America, and Europe. [1] [2]

Buyers of real-estate are often presented with a situation where multiple buyers are interested in the same property. This creates uncertainties that can be split into:

By utilising a forward e-auction for the conclusion of the sales process and deal only real and approved buyers participate, so no faking another bid or bluff is needed, which removes one of the uncertainties for the buyer. During the online auction the buyer can see the lead bid and will be able to adjust it as the auction progresses, therefore the winning price will be clear for all and the buyer will not have to guess what offers is the right to win. The time spend is usually not more than a couple of hours which means that if the auction is not won, the time spend is much lower compared to the conventional negotiations. The fact that it is an online auction the bidding can be done in front of any computer which minimises travel time to and from the real estate agent.

Most common approach is to use a 3rd party consultant to ensure that the real estate agent can prove that the process have been conducted fair and that ethics of the online auction is maintained.

A real estate broker, real estate agent or realtor is a person who represents sellers or buyers of real estate or real property. While a broker may work independently, an agent usually works under a licensed broker to represent clients. Brokers and agents are licensed by the state to negotiate sales agreements and manage the documentation required for closing real estate transactions. In North America, some brokers and agents are members of the National Association of Realtors (NAR), the largest trade association for the industry. NAR members are obligated by a code of ethics that go above and beyond state legal requirements to work in the best interest of the client. Buyers and sellers are generally advised to consult a licensed real estate professional for a written definition of an individual state's laws of agency, and many states require written disclosures to be signed by all parties outlining the duties and obligations.

An estate agent is a person or business that arranges the selling, renting, or management of properties and other buildings. An agent that specialises in renting is often called a letting or management agent. Estate agents are mainly engaged in the marketing of property available for sale, and a solicitor or licensed conveyancer is used to prepare the legal documents. In Scotland, however, many solicitors also act as estate agents, a practice that is rare in England and Wales. 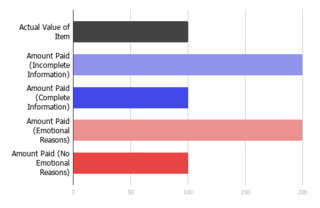 The winner's curse is a phenomenon that may occur in common value auctions, where all bidders have the same value for an item but receive different private signals about this value and wherein the winner is the bidder with the most optimistic evaluation of the asset and therefore will tend to overestimate and overpay. Accordingly, the winner will be "cursed" in one of two ways: either the winning bid will exceed the value of the auctioned asset making the winner worse off in absolute terms, or the value of the asset will be less than the bidder anticipated, so the bidder may garner a net gain but will be worse off than anticipated. However, an actual overpayment will generally occur only if the winner fails to account for the winner's curse when bidding.

Market value or OMV is the price at which an asset would trade in a competitive auction setting. Market value is often used interchangeably with open market value, fair value or fair market value, although these terms have distinct definitions in different standards, and may or may not differ in some circumstances.

An online auction is an auction which is held over the internet. Online auctions come in many different formats, but most popularly they are ascending English auctions, descending Dutch auctions, first-price sealed-bid, Vickrey auctions, or sometimes even a combination of multiple auctions, taking elements of one and forging them with another.

An English auction is an open-outcry ascending dynamic auction. It proceeds as follows.

For Sale By Owner, or FSBO, is the process of selling real estate without the representation of a real estate broker or real estate agent. Homeowners may employ the services of marketing or online listing companies or market their own property but do not pay a commission and represent themselves with the help of a lawyer or Solicitor throughout the sale.

Auction sniping is the practice, in a timed online auction, of placing a bid likely to exceed the current highest bid as late as possible—usually seconds before the end of the auction—giving other bidders no time to outbid the sniper. This can be done manually, by software on the bidder's computer, or by an online sniping service.

Creative real estate investing is any non-traditional method of buying and selling real estate. Confidence tricks and pyramid schemes in the 20th and 21st century such as Nouveau Riche have embraced the term, leading contemporary usage of the term to be synonymous with unscrupulous practices.

Bidding is an offer to set a price tag by an individual or business for a product or service or a demand that something be done. Bidding is used to determine the cost or value of something.

A smart market is a periodic auction which is cleared by the operations research technique of mathematical optimization, such as linear programming. The smart market is operated by a market manager. Trades are not bilateral, between pairs of people, but rather to or from a pool. A smart market can assist market operation when trades would otherwise have significant transaction costs or externalities.

In game theory, decision-makers deduce strategies for how to behave within the constraints of a game. Market design is the flip side of that coin: given a set of agents, market design seeks to identify the game rules a market designer might implement that would produce the desired behaviors in the players. In some markets, prices may be used to induce the desired outcomes—these markets are the study of auction theory. In other markets, prices may not be used—these markets are the study of matching theory. 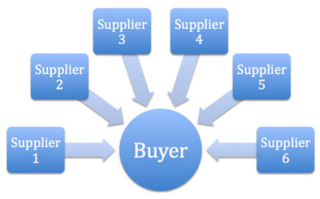 A reverse auction is a type of auction in which the traditional roles of buyer and seller are reversed. Thus, there is one buyer and many potential sellers. In an ordinary auction, buyers compete to obtain goods or services by offering increasingly higher prices. In contrast, in a reverse auction, the sellers compete to obtain business from the buyer and prices will typically decrease as the sellers underbid each other.