True believer(s) or The True Believer may refer to: 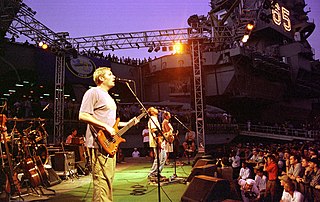 Hootie & the Blowfish is an American rock band that was formed in Columbia, South Carolina in 1986. The band's lineup for most of its existence has been the quartet of Darius Rucker, Mark Bryan, Dean Felber, and Jim Sonefeld. The band went on hiatus in 2008 until they announced plans for a full reunion tour in 2019 and released their first new studio album in fourteen years, Imperfect Circle.

Darius Carlos Rucker is an American singer and songwriter. He first gained fame as the lead vocalist and rhythm guitarist of rock band Hootie & the Blowfish, which he founded in 1986 at the University of South Carolina along with Mark Bryan, Jim "Soni" Sonefeld, and Dean Felber. The band released five studio albums with him as a member and charted six top 40 hits on the Billboard Hot 100. Rucker co-wrote most of the songs with the other members.

Faith is a religious belief.

Haunted or The Haunted may refer to:

Strangers are people who are unknown to another person or group.

Black swan is the common name for Cygnus atratus, an Australasian waterfowl.

Twilight is the time of day before sunrise or after sunset.

Visitor, in English and Welsh law, is an academic or ecclesiastical title.

The Wedding may refer to:

American singer Darius Rucker gained fame as the lead singer of the American roots rock band Hootie & the Blowfish before emerging as a major country music singer in 2008. As a solo artist, his discography comprises seven studio albums, including five for Capitol Nashville. His singles since 2008 have all been released to the country music format, where he has eight number-one singles: "Don't Think I Don't Think About It", "It Won't Be Like This for Long", "Alright", "Come Back Song", "This", "Wagon Wheel", "If I Told You", and “For the First Time”.

The Thrilling Adventure Hour was a staged production and podcast in the style of old time radio that was held monthly at Largo, a Los Angeles nightclub located in the former Coronet Theatre. The show ran from March 2005 to April 2015. Each episode featured three non-serialized segments as well as songs and commercials from fictional sponsors. The show was written by Ben Acker and Ben Blacker; and directed by Aaron Ginsburg. The show's original songs were written by Acker & Blacker with the composer and band leader Andy Paley.

"True Believers" is a song co-written recorded by American country music artist Darius Rucker. It was released in August 2012 as his first single and title track from his album True Believers. Rucker wrote the song with Josh Kear.

True Believers is the fourth studio album by American country music artist Darius Rucker, and his third in the country genre. It was released on May 21, 2013, through Capitol Records Nashville.