Trumbull Park Homes is a Chicago Housing Authority (CHA) public housing project located in the South Deering neighborhood on the Far-South Side of Chicago, Illinois, United States. Built in 1938, it consists of 55 buildings and 434 apartments. [2] Its chief architect was John A. Holabird.

On July 30, 1953, the CHA moved Betty Howard, a light-skinned black woman, and her family into the project. Starting on August 5 and lasting for weeks, white residents of the projects attacked the Howard home with rocks, fireworks, with police doing little to stop them. In October 1953, the CHA decided to move 10 more black families in, sparking a new wave of violence. It was not until 1963 that blacks could go to the neighborhood park without police protection. [3] [4]

Rogers Park is the first of Chicago's 77 community areas. Located 9 miles (14 km) from the Loop, it is on the city's far north side on the shore of Lake Michigan. The neighborhood is commonly known for its cultural diversity, lush green public spaces, early 20th century architecture, live theater, unique bars/restaurants, beaches, and progressive mindset. It is bounded by the city of Evanston along Juneway Terrace and Howard Street to the north, Ridge Boulevard to the west, Devon Avenue and the Edgewater neighborhood to the south, and Lake Michigan to the east. The neighborhood just to the west, West Ridge, was part of Rogers Park until the 1890s and is still commonly referred to as West Rogers Park. 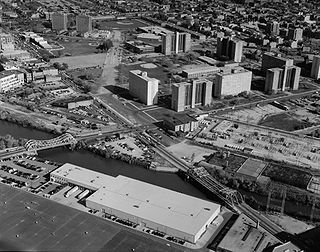 Cabrini–Green Homes, which encompassed the Frances Cabrini Rowhouses, Frances Cabrini Extensions, and William Green Homes, was a Chicago Housing Authority (CHA) public housing project located on the Near North Side of Chicago, Illinois. The Francis Cabrini Rowhouses and Extensions were located south of Division Street bordered by Larrabee Street to the west, Orleans Street to the east, and Chicago Avenue to the south, while the William Green Homes sat immediately to the northwest. 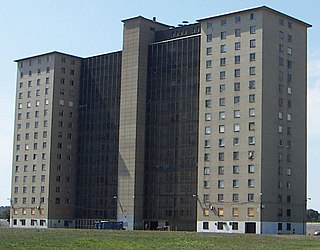 Robert Taylor Homes was a public housing project in the Bronzeville neighborhood on the South Side of Chicago, Illinois, located along State Street between Pershing Road and 54th Street, alongside the Dan Ryan Expressway. The project was named for Robert Rochon Taylor, an African-American activist and the first African American chairman of the Chicago Housing Authority (CHA). It was a part of the State Street Corridor which included other CHA housing projects: Stateway Gardens, Dearborn Homes, Harold Ickes Homes, and Hilliard Homes. 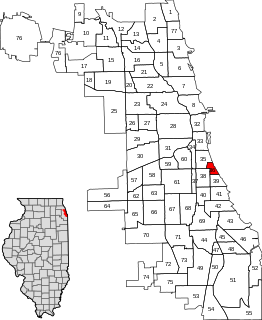 Oakland, located on the South Side of Chicago, Illinois, USA, is one of 77 officially designated Chicago community areas. Bordered by 35th and 43rd Streets, Cottage Grove Avenue and Lake Shore Drive, The Oakland area was constructed between 1872 and 1905. Some of Chicago's great old homes may be seen on Drexel Boulevard. The late 19th-century Monument Baptist Church on Oakwood Blvd. is modeled after Boston's Trinity Church. Oakwood /41st Street Beach in Burnham Park is at 4100 S. Lake Shore Drive. With an area of only 0.6 sq mi Oakland is the smallest community area by area in Chicago.

Roseland is one of the 77 official community areas of Chicago, Illinois, located on the far south side of the city. It includes the neighborhoods of Fernwood, Princeton Park, Lilydale, the southern portion of West Chesterfield, Rosemoor, Sheldon Heights and West Roseland. 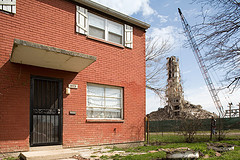 ABLA Homes was a Chicago Housing Authority (CHA) public housing development that comprised four separate public housing projects on the Near-West Side of Chicago, Illinois. The name "ABLA" was an acronym for four different housing developments that together constituted one large site: the Jane Addams Homes, Robert Brooks Homes, Loomis Courts, and the Grace Abbott Homes, totaling 3,596 units. It spanned from Cabrini Street on the north end to 15th Street on the south end, and from Blue Island Avenue on the east end to Ashland Avenue on the west end. Most of the ABLA Homes has been demolished for the development of Roosevelt Square, a new mixed-income community, with the renovated Brooks Homes being the only part left. For most of its existence, the ABLAs held more than 17,000 residents, giving it the second largest population in the CHA. It was second only to the Robert Taylor Homes and Cabrini–Green in land area and had a higher occupancy than Cabrini–Green.

South Deering, located on Chicago's far South Side, is the largest of the 77 official community areas of that city. Primarily an industrial area, a small residential neighborhood exists in the northeast corner and Lake Calumet takes up a large portion of the area. 80% of the community area is zoned as industrial, natural wetlands, or parks. The remaining 20% is zoned for residential and small-scale commercial uses. It is part of the 10th Ward, once under the control of former Richard J. Daley ally Alderman Edward Vrdolyak.

Little Italy, sometimes combined with University Village into one neighborhood, is on the Near West Side of Chicago, Illinois. The current boundaries of Little Italy are Ashland Avenue on the west and Interstate 90/94 on the east, the Eisenhower Expressway on the north and Roosevelt to the south. It lies between the east side of the University of Illinois at Chicago campus in the Illinois Medical District and the west side of the University of Illinois at Chicago campus. The community was once predominantly Italian immigrants but now is made up of diverse ethnic and socio-economic backgrounds as a result of immigration, urban renewal, gentrification and the growth of the resident student and faculty population of the University of Illinois at Chicago (UIC). Its Italian-American heritage is primarily evident in the Italian-American restaurants that once lined Taylor Street. The neighborhood is home to the National Italian American Sports Hall of Fame as well as the historic Roman Catholic churches Our Lady of Pompeii, Notre Dame de Chicago, and Holy Family. 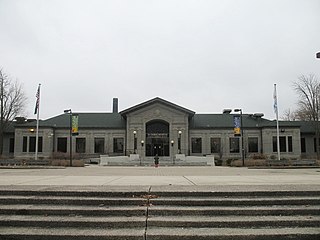 The history of African Americans in Chicago dates back to Jean Baptiste Point du Sable’s trading activities in the 1780s. Du Sable, the city's founder, was Haitian of African and French descent. Fugitive slaves and freedmen established the city's first black community in the 1840s. By the late 19th century, the first black person had been elected to office.

Stateway Gardens was a Chicago Housing Authority (CHA) public housing project located in the Bronzeville neighborhood on the South Side of Chicago, Illinois.

The Chicago Freedom Movement, also known as the Chicago open housing movement, was led by Martin Luther King Jr., James Bevel and Al Raby. It was supported by the Chicago based Coordinating Council of Community Organizations (CCCO) and the Southern Christian Leadership Conference (SCLC). The movement included a large rally, marches, and demands to the City of Chicago. These specific demands covered a wide range of areas besides open housing, and included quality education, transportation and job access, income and employment, health, wealth generation, crime and the criminal justice system, community development, tenants rights, and quality of life. Operation Breadbasket in part led by Jesse Jackson sought to harness African-American consumer power. The Chicago Freedom Movement was the most ambitious civil rights campaign in the North of the United States, lasted from mid-1965 to August 1966, and is largely credited with inspiring the 1968 Fair Housing Act. 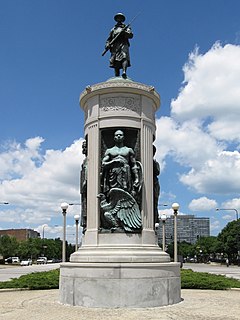 The South Side is an area of Chicago. It is the largest of the three Sides of the city that radiate from downtown—the others being the North Side and the West Side.

Elizabeth Wood was the first Executive Director of the Chicago Housing Authority from 1937 until 1954.

José Cha Cha Jiménez is the founder of the Young Lords, a national human rights movement. It was founded in the Lincoln Park neighborhood of Chicago on September 23, 1968. Jiménez was born in Caguas, Puerto Rico, to Eugenia Rodríguez Flores of San Lorenzo and Antonio Jiménez Rodríguez from San Salvador barrio in Caguas.

The Airport Homes race riots were a series of riots in 1946 in the West Lawn and West Elsdon neighborhoods of Chicago, Illinois. It was the worst episode of racial inspired violence that the city faced in some thirty years.

The Fernwood Park race riot was a violent racial conflict instigated by white residents against African American residents who inhabited the Chicago Housing Authority (CHA) veterans' housing project in the Fernwood Park neighborhood in Chicago. Area residents viewed this as one of several attempts by the CHA to initiate racial integration into white communities. The riot took place between 98th and 111th streets and lasted for three days, from the day veterans and their families moved into the project, August 13th, 1947 to August 16th, 1947. The Chicago Police Department did little to stop the rioting, as was the case a year before at the Airport Homes race riots. It was one of the worst race riots in Chicago history.

The Ida B. Wells Homes, which also comprised the Clarence Darrow Homes and Madden Park Homes, was a Chicago Housing Authority (CHA) public housing project located in the heart of the Bronzeville neighborhood on the South Side of Chicago, Illinois. It was bordered by 35th Street to the north, Pershing Road to the south, Cottage Grove Avenue to the east, and Martin Luther King Drive to the west. The Ida B. Wells Homes consisted of rowhouses, mid-rises, and high-rise apartment buildings, constructed to house African American tenants. They were demolished beginning in 2002 and ending in 2011.

Julia C. Lathrop Homes is a Chicago Housing Authority (CHA) public housing project located along the line between the Lincoln Park and North Center neighborhoods on the north side of Chicago, Illinois, United States. It is bordered by the neighborhoods of Bucktown and Roscoe Village. Completed in 1938 by the Public Works Administration, Lathrop Homes was one of the first Chicago public housing projects. Lathrop Homes was placed on the National Register of Historic Places in 2012 and is currently undergoing restoration. Lathrop Homes consists of two-story brick row houses and three- and four-story apartment buildings separated by landscaped courtyards and linked by small archways in a campus-like arrangement. There are a total of 925 units on 35.5 acres of land.

Robert Rochon Taylor was an American housing activist and banker. A founder of the Illinois Federal Savings and Loan, a mortgager for black residents of Chicago's South Side, Taylor was the first black member of the Chicago Housing Authority and later its chairman. The Robert Taylor Homes, a public housing project completed in 1962, was named for Taylor.